Listening to travel writer Paul Theroux at Immrama in Lismore, Co Waterford, was enlightening – and what a great tattoo 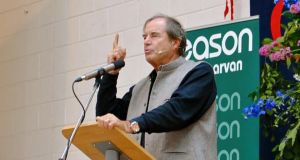 A few months ago a student who was in the throes of completing an MA on festivals got in touch. Discussing her thesis on the authenticity of festivals was interesting, but discovering that you could study festivals was the shocker. My career guidance teacher missed that trick and not a blip on the CAO forms. I feel cheated.

We completed a questionnaire that sought to discover whether a festival needs to have deep, aged, organic, community-centred and nourishing roots in order to be a successful event. I wasn’t really sure of the answer at the time, frankly any questions that delved deeper than whether the bands were good and the beer cold left me a bit confuddled. It’s all about priorities.

Last weekend, I sat in a sports hall in Lismore, Co Waterford, amongst a crowd that was more than 400 strong. They had paid €25 a head to come and listen to Paul Theroux (Louis’s auld fella) talk about his travel writing. I initially thought the tickets a bit steep, but not only did I end up really enjoying it, I bought two books. The dude was honest, frank, down to earth, insightful, hard-hitting on foreign aid and Bono, and he’s also a bee-keeping goose-tender to boot. For a fella who made a name for himself by travelling the world, he was able to sum up where he lays his hat pretty succinctly: “Home is where you want to die.” This seemed somewhat morbid until he qualified it by saying that when he’s in England, he often thinks “I’d hate to die here.” The west-Waterford crowd appreciated the sentiment.

More than his successful career, pallets of plaudits and words of wisdom, it was his tattoo that impressed me most. He has a classic swallow tattoo on his hand, just below the V where his thumb and forefinger join. This is the traditional marking for sailors who have clocked up serious milage. The hard earned-ink in a place where it can’t easily be hidden is about as close as a fella like Mr Theroux can get to actually putting his heart on his sleeve.

WANDERLUSTING
Lismore Immrama Writers’ Festival has plenty to offer wanderlusting bookish punters, but it’s the event’s origins that I find fascinating. Ten years ago, a “Festival Consultant” was hired to visit Lismore, where she was furnished with the criteria for an ideal festival for the town. It’s a small enough place, so they only wanted enough festivalers to fill the available bed nights in the hotels and guesthouses. They didn’t want revellers with bags of cans or any general rowdiness.

The festival guru toddled off, looked into her crystal-ball of celebrations and returned with a festival plan. She latched on to well- respected travel writer, bicycling and beer enthusiast Dervla Murphy, being from the picturesque pueblo on the Blackwater. Her suggested travel writers’ festival ticked all the right boxes so Lismore ran with it.

When I first heard about the beginnings of this festival, I thought it contrived, the consultant in question making out like a bandit, receiving a fee that would have enabled John McGuinness to take the missus on a first-class round-the-world trip.

But as I sat at yet another sold-out event that charged the audience €25 a bulb, I couldn’t help but think: “Jaysus, that festival guru really had session second sight.”

It was an 8.30am breakfast talk, earliest I’ve been conscious at a festival without staying up all night, and the eager crowd were hungry for toast and tales. Charlie Connelly didn’t disappoint when he recounted entertaining and quirky travel adventures.

As I tucked into the Full Irish, pondering the authenticity of festivals and whether fancy herb infused sausages are better than Denny’s original, Immrama struck me as being more maple cured than standard traditional. A tasty festival, the proof was in the pudding.