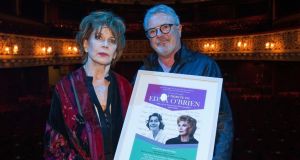 Edna O’Brien with director John McColgan, who presented her with a framed portrait before the tribute performance for her at the Gaiety Theatre in Dublin last night. Photographs: Dave Meehan 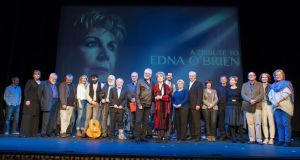 Edna O’Brien with members of the cast and guest performers prior to a special tribute performance to the writer at the Gaiety Theatre in Dublin last night.Photograph: Dave Meehan

A happy gathering of the great and the good of contemporary Irish culture assembled at the Gaiety Theatre in Dublin last night to pay tribute to the writer Edna O’Brien.

The MC for the evening was O’Brien’s fellow novelist Joseph O’Connor.

“Edna is a rebel and a rule-breaker,” he said. “Every writer in Ireland owes her a lot. She’s a great example of a writer who just did her work – she took the good with the bad, and got on with it.”

Over O’Brien’s 55-year career there have been plenty of ups and downs. In 1960, her debut novel The Country Girls was banned, burned and denounced from the pulpit for its frank portrayal of the sex lives of its characters.

Since then she has produced a stream of short stories, plays, non-fiction and an extraordinary 17 novels – of which her most recent, last year’s The Little Red Chairs, was hailed by Philip Roth as her masterpiece. Last year she was awarded the highest honour the State can bestow, that of Aosdána Saoi.

Dressed in glowing red and black, O’Brien was greeted by warm applause when she arrived on stage at the Gaiety to be presented with a photographic portrait by Riverdance impresario John McColgan.

How did she feel on her big night?

“I feel . . . on the edge of the moon,” she said. “I feel very thankful and very thrilled – and very moved by the way everyone is putting their bodies and souls into this evening.”

The tribute ended with a triumphant finale as the musicians, led by the irrepressible Moloney on whistle and Sheahan on fiddle, launched into a spirited rendition of the traditional song Oró Sé Do Bheatha ’Bhaile.

“For the year that’s in it,” Moloney declared, “welcome home”, as the lyrics say. “Welcome home, now that summer’s coming.”

There could hardly have been a more apt choice for the night that was in it.