Words of wisdom from the House of Lord: The Best of Miriam Lord 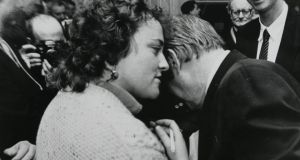 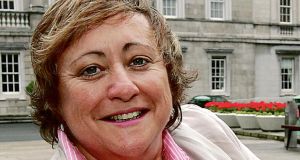 Two people in this world can always make me laugh. One is the great comedian June Rodgers. The other is Miriam Lord. Both are masters of Dublin street wit: raucous, irreverent, cheerful.

And with Miriam, this newspaper’s political sketchwriter, it’s always simple. Nothing fancy or self-regarding here. No classical references or bits of Shakespeare. God forbid. But plenty of good old-fashioned slapstick, like when she described the Opposition’s performance in attacking the Government: “Give the Government a grilling, my foot. This lot couldn’t grill a rasher.”

To the dullest days in Dáil Éireann Lord brings a dash of pantomime. The Taoiseach, with his light, tripping voice and west of Ireland accent, is Indakinny, making him sound for all the world like a village out of a Bord Fáilte brochure.

The hapless former minister for health James Reilly is alternatively Dicey Reilly or Calamity James. She dubbed the developer and Italian vineyard owner Mick Wallace “Mick Wallets” after his tax evasion became known. When Aengus Ó Snodaigh, the Sinn Féin TD, got €50,000 worth of Dell ink cartridges from the Oireachtas supplies unit she called him and his party “Dell Boy and the Cartridge family”.

Miriam is funny, but she’s much more than that. Colour or descriptive writing is often dismissed by the hard-news types as fluff, but the sketch or descriptive piece at its best is deadly serious. It may divert you, amuse you, but a good sketch should also try to nail down an important truth. It can heal and it can wound. It can help make careers and it can help to break them.

Some of the greatest writers – Mark Twain, William Hazlitt, Daniel Defoe, Samuel Taylor Coleridge and Charles Dickens – were, in their time, parliamentary sketchwriters.

They knew that sketch or descriptive writing has always been a central part of the best and most powerful journalism; that its power lies in its ability to bear witness – I was there, this is how it was – and in its ability to be deeply subversive, often much more so than the straight report.

Most important of all, descriptive writing returns the human dimension to reportage. It goes behind the headlines, behind the statistics, and puts people and their quirks at the centre of the story. How can you tell a story with no people in it? You can’t, at least not in any way that will interest your reader.

Miriam is often tough about the people she writes about, but she’s rarely cynical. That’s important. If you have already closed your mind against parliament or those in it you can’t write about them with any warmth.

North Dub that she is, she had great time for Charlie Haughey and for Bertie Ahern. The depth of her subsequent disillusionment with Ahern makes for two of the finest pieces in this collection.

The first sketch is the one we all remember: Miriam’s description of the day that Bertie’s secretary, Gráinne Carruth, broke down in the witness box at the Mahon tribunal. Counsel for the tribunal was pressing her to say whether she had converted sterling for Bertie and lodged it to his bank account.

Had Bertie been there when Carruth was desperately trying to stay loyal to him, says Miriam, he would have seen “a woman, alone and trembling in the witness box, battling back the tears, as she whispered in tones so anguished as to be barely audible ‘I just want to go home’.

“It was so pitiful, it’s just a pity Bertie wasn’t there to see it. He might have stood up and shouted like a man: ‘Let the girl go, it’s me you want.’ But that only happens in the movies.”

Miriam is still angry four years later. Walking her dog in St Anne’s Park, in north Dublin, she bumps into Bertie again, a baseball cap pulled low over his eyes. They have an awkward conversation.

“He speaks quietly, sounds almost bewildered by what has befallen him. I want to be sympathetic but can’t. ‘Well, you know where I stand on all this.’ Bertie stops, turns and looks at me from under the peak of his FDNY baseball cap. ‘No. What?’

It’s a sad little encounter – sad and angry and real – and you felt you were standing with her in St Anne’s Park and that you were angry too.

Old sketchwriter that I am, I have a precious book at home given to me by a political friend. It is called Random Recollections of the House of Commons, and the anonymous 19th-century writer is unstinting in his admiration of Daniel O’Connell.

As an orator, he says, there is no one in the House of Commons who can compare with O’Connell. However, his dress is rakish, to say the least.

“The brim of his hat is broader than that of any Quaker. He always wears his hat cocked on the right side of his head, in the manner so common among sailors. His whole appearance, indeed is like that of a ship’s captain for which he is often taken by strangers.”

He says O’Connell has a habit of throwing his arms and his whole body around as he speaks. “But the most singular thing I have ever heard of his doing in the course of the delivery of any of his speeches, was that of untying and taking off his cravat when in one of the best parts of his speech in 1834, on the Repeal of the Union, and when he had worked himself up to the utmost enthusiasm of manner.”

It is wonderful to find O’Connell coming alive in these lines, even 180 years later. You can hear him. You can see him. You can pick up off the floor his discarded cravat. That’s what a good sketchwriter does. That’s what Miriam Lord does.

Olivia O’Leary is a journalist and broadcaster. She does a political column for Drivetime, on RTÉ Radio 1. She wrote the parliamentary sketch for The Irish Times in the early 1980s