Why I Love: Hill of Doors by Robin Robertson

Dionysus, myth, the Scottish landscape, the sea, childhood, time, woodland and its potential for fable, when pushed through the poet’s holographic universe, emerge strange, saturated in dark matter and energised with a power to unsettle 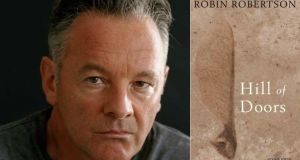 Robin Robertson’s Hill of Doors contains poems for which one would eagerly establish visiting rights, so many reward rereading

As is often the case when examining new writing, we seek out comparisons in craft, to test for sea-worthiness. Eager to locate the writing within the canon, we hold it up against works of established renown, all the more interesting here, as Robin Robertson’s poetry is one against which the standard is regularly measured.

The poems in Hill of Doors, Robertson’s fifth collection, fetch us close to horror and to sadness, but with the addition of hope at the close of the collection. A striking feature in the poems in Hill of Doors is their seeming dialogue with the poems from Robertson’s fourth collection, The Wrecking Light – a feature not immediately discernible in his selected poems, Sailing the Forest: Selected Poems (Farrar Straus Giroux, 2014)

In Hill of Doors, familiar tropes make their entries once more: Dionysus, myth, the Scottish landscape, the sea, childhood, time, woodland and its potential for fable. These themes, when pushed through Robertson’s holographic universe, emerge strange, saturated in dark matter and energised with a power to unsettle.

In The Fishermen’s Farewell, the selkie men, so familiar of Scottish and Irish folklore, are given full account in slow and meditative language. Robertson’s punctuation decelerates our reading, whilst his use of assonance and iteration insist we dwell on his descriptions of “smoke-walkers, ocean-stealers [who] never throw a shadow”, whose:

and black in the undertow

[who, restless to put to sea once more, would be]

…rumour if they could, in this frozen

One is certain these selkie are of the same community as those in the poem At Roane Head, from Robertson’s fourth collection, The Wrecking Light. However if The Fisherman’s Farewell, is in dialogue with At Roane Head, it is at a more serious, this world, remove, as a description of the decimation of a fishing tribe and trade.

In the time it took to hold my breath

And slip under the bathwater

The speaker has lost both parents and his childhood, symbolised by his demolished home.

I swim one length underwater

Pulling myself up on the other side, gasping,

Robertson lists a failed marriage, his “daughters grown and settled”, and him left with an ageing body and a racing heart (a heart whose brokenness, we learn in this latest collection, Hill of Doors, is more than figurative).

In Fugitive In London, the speaker uses “these streets to disappear”, losing himself in crowds over a period of thirty years,

underground and coming up

The difference in this poem, is that the speaker is now prepared to exhume his psyche, to lift the floorboards on his subconscious,

To look, to see what I’d done. The boy

I’d killed and buried there was me.

About Time and Fugitive In London, from these consecutive collections, are not the only poems intimately connected in terms of metaphor and theme. Other poems that speak to one another of childhood and loss, book from book, are: The Act Of Distress, the masterful and memorable The Wood Of Lost Things, and Beginning To Green, in The Wrecking Light, and, A Childhood, 1964 and The Dream House from Hill of Doors.

Three poems in Hill of Doors that particularly resonate with this reader are: CORRYVRECKAN, The Halving and A & E.

Robertson’s sea poems describe its pull and power with an assuredness achieved by Richard Murphy, and few others. We learn from the notes at the back of the book that Corryvrackan is the “third biggest whirlpool in the world”. The epilogue to the poem is a quote from Alexander Lindsay c.1540, warning of its dangers, and which, we gather from Robertson’s poem, remain unchanged today.

CORRYVRECKAN is distinctive in that the poet’s choice of words produces an auditory as well as a visual effect in the mind of the reader; we hear the thunderous surge and suck of the water, as well as see the “great seething…the frenzy of water feeding on water”.

Robertson’s simile is of an attacking, warring sea, charging the whirlpool. It is a “long army moving fast…to reach, at the end, the terrible turbulence of battle.” However, once it breaks “the sentry” waves and gets inside the whirlpool, “the sea gets stranger”. This is the poem’s volta and a turn to the surreal that is the unsettling element in many of Robertson’s poems. The sea is its own creature, surging and gargling, terrifyingly, in the “great black gullet of loss…The long throat of Corryvreackan”.

Two remarkable poems picture the poet’s cardiac surgery, The Halving, and what happens when he presents himself back in casualty, A & E, following discharge.

In only two verses The Halving chronicles the poet’s bicuspid valve replacement.

The first verse describes, with clinical economy, the mechanics of the procedure,

chilled and stopped and left to dry.

The second verse has that turn to strange.

Four hours I’d been away: out of my body.

Made to die then jerked back to the world.

The poet is certain that in the return to himself, not all of what he was before has returned with him. That The Halving can retell this experience in two, short-line verses and hold the reader in its thrall to the last disquieting line, is a testament to Robertson’s skill as a wordsmith.

What horror Robertson presents to us and to the nurse in the A & E, at the “Saturday-night abattoir/of Casualty at King’s on Denmark Hill” must be left to the reader to discover. It would spoil its effect to describe it here. Suffice to say, one can only imagine the commotion amongst the medical staff in response, outside the narrative of the poem.

Certain poems in Hill of Doors, such as the retelling of Dionysus and poems after Ovid, are interesting only in so far as they are rendered through Robertson poetics. Whereas The Wrecking Light is a sturdy craft with rare false rivets, the Hill of Doors is less well hewn, containing the occasional poem that does not hold the reader’s interest or which appears to lose interest in itself.

Hill of Doors contains poems for which one would eagerly establish visiting rights, so many reward rereading. The book closes with a series of poems of the utmost beauty and tenderness. In The Key, the final poem in the collection, the poet allows himself access through a door to a place of peace and contentment, of growth and renewal.

To the walled garden, the place

With a simple turn

I’d carried with me

Eleanor Hooker is an Irish poet and writer. The Shadow Owner’s Companion (Dedalus Press) is her first collection. eleanorhooker.com