Waterford Whispers News Takes Over the World: all the news that’s fit to mock 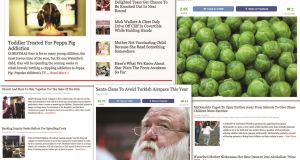 The American satirical website The Onion has been a fixture of the internet for almost 20 years. Its absurdist blend of social and political humour in the style of a terrible local newspaper continues to inspire countless imitators, defining what a “satire site” looks like, in much the way Private Eye has set the template for a satirical news magazine.

Sometimes this mould has been broken, though strikingly rarely, given an online medium that demands novelty and is open to everyone. So the only way for another Onion to stand out is to be extremely funny, and Waterford Whispers News (WWN) certainly has that distinction. For wit, audacity and brevity, it is hard to beat the headline: “Hillary to f*** an intern”.

WWN is an Irish take on The Onion, of course, although that has been tried often enough to mean an Irish audience has to be earned. Stories such as “Waterford Crystal Meth announce 45 new jobs” and “Inter-county marriages finally legalised” have been building a local following since Colm Williamson founded WWN as a Facebook page in 2009. By last year, WWN had 300,000 followers, three million monthly views to its standalone website, and was universally acknowledged as Ireland’s No 1 internet satire source.

Williamson quit his job as a bar manager to run WWN full-time and has since hired two co-writers, an in-house cartoonist and an IT manager – a substantial business by internet publishing standards and a sizeable writing team even by television standards.

Publishing a book based on the website loses little between formats, as WWN is a beautifully clean page online, turning a profit without video content or intrusive ads – a trick most of the world’s real newspapers have yet to manage. The problem with news satire in any form is how quickly it can date, along with the news itself. That can be especially true of online satire, which lends itself to mocking today’s headlines today.

Waterford Whispers News Takes Over the World, a best-of collection, gets around this by ditching chronological order altogether and grouping its excerpts by category: entertainment, sport, politics and so on. Only Irish politics would not translate in full to any ghastly small town in Europe or North America, which is something the authors rightly revel in.

The book also treats readers to more specific Irish archetypes in stories such as “Neighbour can’t believe the weather we’re having”, “Children running around playground will ‘sleep tonight’, claims grandmother”; and “Small-town clique of sessioners running out of friends to sleep with”.

Most of Waterford Whispers News Takes Over the World wisely comprises this type of timeless content, which works much better than current affairs stories that for practical reasons can be no more current than last May’s same-sex marriage referendum , which was covered by a feature called “Will gay people eat my children?”.

A witty and clever touch in the book is a large selection of jokes at the expense of internet users. “Waterford man still sending Farmville requests”; “5 ways to cope with a baby who won’t pose for cute Facebook photos”; and “No sexy singles in your area waiting to chat, finds independent enquiry” are all tales to make you glad your are handling print. Old media does not escape either. A running joke about research from “the Institute of Studies” pokes fun at serious reporting, while a Garda warning to avoid “broad daylight” due to a spate of muggings is a beautiful observation on newspaper cliche.

It is no accident that all the jokes quoted in this review are headlines. The Onion’s writing team famously produces its punchline headlines first, then fills in the stories below. I found some of stories in the WWN book overlong, although I was suitably chastised for this halfway through by the headline “Average human attention span shorter than this headline”.

Its in-house cartoonist Rory Thompson is a superb asset (again, one many newspapers would envy), and some of his work published here reveals a potential to take his talent to another level.

WWN is at its best when it is uses its freedom to make jokes that would never be broadcast. “These 5 IRA atrocities will make you feel so old!” was a particularly memorable example online, parodying the Buzzfeed “listicle” style in a vicious, tasteless attack on the futility of the Troubles.

Apart from some epic swearing, the book is rather cautious in this respect, perhaps because the website’s exceptional moments are often driven by anger at the news. There are still a few flashes of dark brilliance in the printed version, however, such as “Local ‘character’ actually in need of some serious help” and “Uncle Ben shot dead by US police”.

And there is no question of the authors losing their nerve: in August, WWN received a cease-and-desist letter from businessman Denis O’Brien ordering it to take down a story about him from the website. Another story about O’Brien appears in the book.

Waterford Whispers News has made it past the one-man-hobby stage to become a professional product. That should help it to add more layers to its Onion – a conclusion it would, of course, have seen coming from this article’s opening line, and mocked accordingly. Newton Emerson is a writer and creator of the Portadown News satirical website