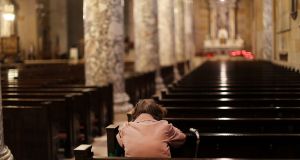 Faith in competition: Catholicism has become one of a number of options available in a mixed religious market. Photograph: Spencer Platt/Getty Images

Mary Redmond, a parishioner of Our Lady of Good Counsel, Ballyboden, one of the case studies dealt with in this intriguing publication by Gladys Ganiel, opens the book with the following observation: “A lot of people say to you: why are you still a Catholic? Imagine, being asked that question in Ireland! It’s quite extraordinary.”

The remarkable thing about Redmond’s reaction to being asked this question is that she should be surprised by it. After all, it has been clear for some time that Irish people’s attitude to Catholicism, formerly one of deference, even obsequiousness, has been totally transformed in the past few decades. From being a badge of honour proudly worn for all to see and admire, Catholicism is now what D Vincent Twomey described in The End of Irish Catholicism? (2003) as “more often than not an embarrassment to be reluctantly admitted”.

However, in spite of the disappointment and disgust engendered by the clerical abuse scandals, falling attendance at Mass and the sacraments, the ambient secularism evident north and south of the Border, particularly among young people, it is still strange to hear Ireland described as being “post-Catholic”. Helpfully, Ganiel spells out what she means by the term, saying that, for her, “the religious landscape of the island of Ireland has changed from one in which the Catholic Church commanded a monopoly of religious, social, and political power, to one in which the Catholic Church is one option among many in a mixed, post-Catholic religious market”.

Ganiel further argues that calling Ireland post-Catholic does not indicate that Catholicism has disappeared altogether: rather, it has become one of a number of options that are available to people seeking religious or spiritual nourishment. The regularity with which those interviewed for this book (many of whom were never members of the Catholic Church) spoke of Catholicism as an indispensable reference point, shows how its legacy, though greatly changed, has not been completely lost. Writing in the journal America: The National Catholic Review, in 2013, Archbishop Diarmuid Martin pointed out that one can only truly speak of a post-Catholic Ireland by taking into account the specific brand of Catholicism that has been displaced. That Catholicism was, in this author’s view, triumphalist, complacent, patriarchal, and obsessed with sin, especially sexual sin. It enjoyed what another sociologist, Tom Inglis, in his landmark 1998 study, described as a “moral monopoly”.

The steady move towards what sociologists refer to as “extra-institutional” religion is not unique to Ireland. For example, Ulrich Beck noted in A God of One’s Own (2010) that there was a profound change underway in Europe from a culture in which people acquire their religious belief simply by “inheriting” it to one in which a religious creed is freely chosen and consumed.

The case studies that constitute the main thrust of Ganiel’s study are examples of the growth of extra-institutional religious practices in Ireland. They are significant in two main ways: first, they prompt personal transformation; and second, they create spaces on the margins of religious markets where people can work together for social and political change. Ganiel stresses that the concept of extra-institutional religion can act as a counterfoil to some prevailing theories whereby the “reflexive” modern religious individual is seen as constructing a “God of one’s own” in a manner that is completely independent of traditional religious institutions.

The groups covered are Ballyboden Parish Pastoral Council, in Dublin; Slí Eile (Magis Ireland), a Jesuit ministry for young adults in Dublin; Abundant Life: A Charismatic Congregation, in Limerick City; St Patrick’s United Church, Waterford City; Jesus Centre, Dublin; Holy Cross Benedictine Monastery in Rostrevor; and Fermanagh Churches Forum. The geographical spread and diversity of Christian beliefs dealt with provide a good flavour of the type of extra-institutional communities that are now evolving on the island of Ireland.The increase of Pentecostal and charismatic churches is now quite noticeable, probably as a result of immigration.

Visitors to Holycross Abbey remark on how it embodies “a new vision of the church in Ireland, one that encompasses all Christian denominations and places the empowerment and spiritual development of lay people at the centre of church life”. Ellen (54), who identifies herself as evangelical, observes that she wanted “to smash the [religious] institutions” that prevented so many in Northern Ireland from experiencing “healing, reconciliation and a type of Christian unity”. Liz contrasts the “truth” of what she sees and hears at Abundant Life, in Limerick, with her earlier experience of Catholicism: “I’m not anti-Catholic or anything like that . . . but I feel there’s an awful lot of the truth they’ve left out.”

One of the most striking findings of Ganiel’s research is that people on the island could not stop talking about Catholicism – whether they were Catholic or not, whether they were Irish-born or not. Some of them spoke about Catholicism to contrast or define their own faith against it. Their religious practice tended to be “outside” or “in addition to” the Catholic Church in Ireland, which adds credence to the use of the term post-Catholic as a descriptive, empirical concept which involves a shift in how the institutional Catholic Church is viewed. It is no longer embraced as it used to be by the majority of the population, is no longer feared in the same way by Protestants, and it does not wield anything like as much power in the realm of social and political life.

Some will rejoice in the fall from grace of one of Ireland’s traditionally most revered institutions, others will regret it, but wherever one stands on the issue, what this book shows clearly is that Catholicism has not gone away but has mutated into something different that could yet prove to be transformative and lasting.

Eamon Maher is co-organising, with Fr John Littleton, a summer school on Irish Catholic identity, to take place in 2017 at the Institute of Technology and the Priory Institute in Tallaght. See it-tallaght.ie/ international-summer-school