Tongulish by Rita Ann Higgins review: political poet with a talent for love 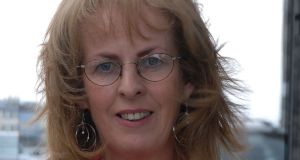 Rita Ann Higgins: ‘You can beat language and it will stand up’

Rita Ann Higgins’s politics start from the roots, her choice of words and the way she uses them. Nouns become verbs and puns gang up on each other as she bends the language, a chorus of voices soaring while Higgins plumbs the depths.

Tongulish, her 11th book of poetry, finds Higgins as intensively inventive and deliciously subversive as ever. The word “tongulish” is a Higgins neologism, a language or nonsense word that remains mysteriously open even when Higgins defined it on RTÉ’s Poetry Programme: “It’s like when you were a kid playing cards and you hardly understood quite what was going on and someone would say the aces are floating.”

Higgins explains that the word tongulish “copper-fastens the notion that language is malleable and you can beat language and it will stand up”. The title poem itself is a fizzing morphing ball of energy where the sound and the sense are inseparable: “Just speak or hold forever, / weasel or wicked words, / worm words, that are worthless, cutting down to size words, / that matter or don’t matter.”

Tongulish sounds rather like James Joyce’s famous “tundish” in Portrait of the Artist as A Young Man, a Dublin word for funnel which leads to his famous meditation on the ownership of the English language. The rebellious, innovative Higgins is one of his distinctive heirs. Like Joyce, she knows just how to beat up the English language and her use of mythology, Irish language and Ireland’s past put her own inimitable stamp on her bang up-to-date present: “The Past is never dead. It’s not even past,” Higgins quotes William Faulkner on the Poetry Programme.

The past is definitely not past in her fine Costo Del Dento poem. It starts with a characteristically deft and witty character drawing:

robbin’ pears from the next table.

He’s on the dole at home

with a claim in

for a dodgy kerb job

only he calls it

But halfway through the poem, a joke – “the swelling / only goes down / with gentle kissing” – bursts open the doors of the past to let in a devastatingly cold draught, turning the character and poem on its head:

Any barbarism in him

in the Christian brothers

where they kissed him

nightly with their batons

and he only a child

that still believed in Santa

and the tooth fairy.

Everything is as good as it is dramatic when it comes to Higgins’s impeccable monologues, which beg to be read out loud. In I’ll Give Good Plinth, a politician springs from the page in a handful of words: “Will I give back the 70K severance pay? / I’ll make a statement later today. / I won’t take the hump / but I might take the lump.” The belligerence of power drives through the poem, an unstoppable egotistical force to the end:

No, I won’t answer on national radio

early in the morning what I’m

going to do with the money, honey.

I’ll wait for me as you have all waited for me.

I’ll have someone wipe the sweat from my tie,

I’ll low and I’ll hold and I’ll give good plinth.

The neoclassical plinth of Leinster House is echoed in classical references, such as Mnemosyne and Pythia, and two rousing poems set in ancient Rome where the female lovers of Caligula and Nero answer back in typical Higgins fashion.

The irrepressible voice of Caligula’s sister reaches incantatory heights as witchy half-rhymes snap through the short lines in Caligula:

If I pop those grapes

As if Cuntus was vile

and a favour bestowed.

You forget about Mnemosyne

or a double take, or better still,

A series of six short needle-like poems humorously evoke the desperation and pain of a patient suffering from shingles. Here is Marked: “It’s April / and I still have the shingles. / They prod me like Lucifer’s fork. / A prick for the sin, / a sting for the prick. / Venial or mortal, / no matter.”

For all her political feistiness, Higgins has a talent for love. It’s what makes her characters leap in every dimension off the page. The gruff speaker in the tender maternal poem If the Shoe Fits can’t hide it:

We are waiting for the twins,

about four weeks to go.

You viber me a picture of your swollen foot.

After a list of entertaining complaints against the patient, the universal mother, seized with panic, erupts: “I’m thinking about that heavy-looking foot / I viber back / Where the fuck is your other foot?”

Martina Evans is a poet and novelist. The Windows of Graceland: New and Selected Poems is published by Carcanet