The Unseen review: Red sky at mourning for a Norwegian fishing family

Eileen Battersby found Roy Jacobsen’s book to be as blunt as it is subtle, and one of the best novel she’s ever read 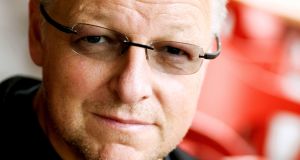 Roy Jacobsen’s ‘prose is beautiful, clean, poised and plain-speaking, but there are interludes of Shakespearean grandeur in the dazzling descriptions of storms’. Photograph by Siv-Elin Nærø

Many strange objects are cast ashore on a sparsely populated island off the coast of Norway. Some of these things hold the promise of a story. The pragmatic islanders are rarely surprised by the sea and its motley wonders, although there was once “a coat with pockets full of newspapers and tobacco from England, a wreath on a watery grave, the French tricolour on a splintered flagpole and a slimy casket containing an exotic woman’s most intimate possessions”.

Sometimes a bottle appears bearing a message, “a mixture of longing and personal confidences”. It is clear that had those missives reached the intended recipient, “they would have caused them to weep tears of blood”.

Gifted Norwegian writer Roy Jacobsen’s international reputation was consolidated by the 2007 publication in English of his wonderful drama, The Burnt-Out Town of Miracles (2005). The book, subsequently shortlisted for the Impac award in 2009, is based on the brief Winter War of 1939, in which the Finns staved off the might of a Russian invasion through tenacious courage and superior skiing.

Jacobsen’s narrator is a determined woodsman who makes a defiant stand when his town is evacuated. His reasoning is plain: “I was born here, had lived here all my life and couldn’t imagine living anywhere else.”

The novel resounds with humanity and laconic humour. Jacobsen, born in 1954, is a rare artist with an innate tone as wry as his observations are profound. His genius is being able to make a reader laugh and cry and, most important of all, to feel more human.

The Burnt-Out Town of Miracles possesses a thrillingly redemptive quality. The same is true of Child Wonder (2009). Again, the story is told by a narrator with open eyes and a sense of humour as Jacobsen describes growing up in an apartment block in a working-class Oslo suburb in the 1960s.

An earlier work, Borders, draws on Hitler’s desperate Ardennes Offensive or the Battle of the Bulge. It is a heavily researched work, powerful, at times earnest, a worthy addition to the canon of war literature. As expected, it yet again confirms that Jacobsen brings an elemental sense of truth to his work.

But even by his high standards, his magnificent new novel The Unseen is Jacobsen’s finest to date, as blunt as it is subtle and is easily among the best books I have ever read.

Weather master The set-up seems simple, almost traditional: three generations of an early 20th-century fishing family live on an island in which the days and nights are subject to the weather, the one almighty master

. The weather immediately emerges as the major presence and shares its role with the vividly drawn characters. Old Martin is nearing the end of his days yet appears happy enough.

As the narrative begins, Old Martin has long since relinquished command to his capable son, Hans. A visionary of sorts, Hans is driven, full of ideas, wants to build a pier to connect their island, Barroy, to the mainland as well as the other island communities. A fisherman-farmer, he is also a dreamer with abundant common sense.

Hans is married to Maria, a study in stoic disappointment who is not overly pleased about the level of hardship the family endures. But she pulls her weight. An even more efficient worker is Barbro, Hans’s much younger sister, who labours like a man and is slightly backward. Her presence is both a blessing and a painful reminder of how fate can mark an individual. When a group of Swedish workmen are summoned to the island to assist in a construction project, Barbro quickly falls prey.

Hans and Maria have only one child, a little girl named Ingrid. Initially it seems that it may be her story and it is, yet it is also more than that. It is a riveting account of not only a way of life, but how that life eventually changes.

There is a unique universality about The Unseen. Jacobsen’s prose is beautiful, clean, poised and plain-speaking, but there are interludes of Shakespearean grandeur in the dazzling descriptions of storms. The family seems to accept these vicious tempests as necessary rituals.

Jacobsen’s translators, Don Bartlett and Don Shaw, have surpassed themselves. Death stalks the pages and the family, because the winter fishing expeditions which Hans sets off on are dangerous and many fishermen are buried in the sea, not the earth.

“Winter begins with a storm. They call it the First Winter Storm. There have been earlier storms, in August and September, for example, bringing sudden and merciless changes to their lives.” The family rules the island, yet each and every member is also its prisoner.

Old Martin sits in respectful silence as the storm ravages his island. His response appears almost symbolic. In reality, so loud is the wind that the creaking of the roof forces the family to sit downstairs.

Yes, there is a terrific story but it is the writing that will cause most readers to read this book at one sitting. True to Jacobsen’s laconic ease, there are two stories; that of the wider world of capricious weather systems which evoke images of churning seas, and also the more intimate daily experiences of individuals caught between the life they know and the one about which they can only dream.

“Islanders are never afraid, if they were they wouldn’t be able to live here,” thinks Ingrid, “they would have to pack their goods and chattels and move and be like everyone else in the forests and valleys, it would be a catastrophe, islanders have a dark disposition, they are beset not with fear but solemnity.”

As she grows up, Ingrid discovers the differences between childhood games and the reality of trying to survive. Eventually she goes to work in a wealthy merchant’s household. All is not well; she is left in charge of two children she dislikes. It is a very funny sequence that becomes an essential part of the story.

Life and death walk hand in hand, and Maria watches as her fragile little world collapses. She fears for her daughter Ingrid and refuses to allow the girl to work as a cook for the fishermen – as she points out, that was how she met her husband.

Ordinary human tragedy frequently intervenes in The Unseen. Life is relentless, as are the seasons. Wisdom and resignation determine much of the action, yet Jacobsen is unafraid of introducing the more lowly elements of social behaviour. There is humour as well as stark, unsentimental pathos.

How to convey the compelling allure of this novel? Jacobsen’s inspired characterisation is well served by the gruff, convincing exchanges, his uncanny feel for the sea and nature in upheaval, and, above all, by his his eloquent awareness of the eerie sensation that a brief moment of silence can create, on an island where sound prevails.