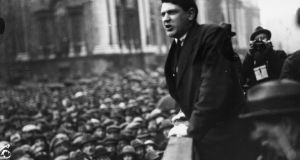 The Twelve Apostles is a rambling, well-worn and uncritical narrative of selected aspects of the War of Independence and Civil War by Tim Pat Coogan, whom the dust jacket fairly describes as Ireland’s best-known historical writer.

Coogan emphasises that it is essentially a reheat of portions of his hugely influential 1990 biography, Michael Collins. That pioneering though controversial work made innovative use of Bureau of Military History statements and other material then in private hands. (The bureau records were opened to the public only in 2003, and the enormous military-service-pensions archive only in 2014. Both are accessible online at militaryarchives.ie.)

In The Twelve Apostles Coogan adduces little new material or arguments and, beyond repeating the canard that the late Peter Hart claimed to have interviewed a man already dead about the Kilmichael ambush, simply brushes aside most historical scholarship on the War of Independence as “part of a debunking attempt on the part of some writers influenced by equal measures of colonial cringe, British and Unionist propaganda and some genuine public revulsion at the war in Northern Ireland”.

He makes almost no allusions to, let alone exploration of, the writings of many researchers and writers – good, bad and in between – on relevant aspects of IRA and crown operations between 1916 and 1921. He also treats his selection of bureau statements as gospel rather than as carefully constructed memoirs, elicited between 1947 and 1957, that, like any other historical source, require critical analysis.

In some cases it is possible from the text to identify, though not to date, an individual document cited, but generally readers have to rely entirely on Coogan’s ex-cathedra pronouncements and judgments.

Once the fighting ended, men such as James Doyle, a heroic survivor of Clanwilliam House in 1916, whose “indomitable and cool courage” apparently saved the day for his IRA comrades in 28 Upper Fitzwilliam Street on Bloody Sunday, went on to lead quiet, steady lives. (His son the late Col ED Doyle was, for many years, a measured and perceptive commentator on international affairs for this newspaper.)

In 1936, when asked by the pension board about the Bloody Sunday killings, Doyle simply replied, “We did our job and cleared out.”

But other veterans, notably Dan Breen TD, became embittered wrecks, convinced that independent Ireland owed them a living more generous than she was willing to provide.

The pension records indicate that some of Coogan’s subjects, such as the first commander of the active service unit, Mick McDonnell, had very severe nervous breakdowns. McDonnell’s medical travails and his dispatch for treatment to the United States by Michael Collins were publicly discussed in the Oireachtas as early as 1925, yet Coogan simply says that, after 1921, he “prospered in California”.

McDonnell’s pension files show that shortly before the Civil War broke out Collins wrote that Dan Breen was “in quite good form and pretty much as he was before the various wounds”, while “Tom Keogh, Ennis and all the old bunch are in good form”, and urged McDonnell “to keep on at the fruit and the sun until you are all right”.

Again, while Coogan notes that Charlie Dalton was widely alleged to have been involved in the murder of three teenage prisoners in Clondalkin during the Civil War, he merely says that he later “did well” after emigrating to the United States.

He does not mention Dalton’s hysterical reaction on the evening of Bloody Sunday, vividly described by his Civil War opponent Seán Lemass in a letter of support for a disability pension in 1941, by which time Dalton had been in Grangegorman mental hospital for more than two years: he “was of highly-strung disposition, and on more than one occasion I came to the conclusion that the strain of his work was telling on his nerves”. (I quoted this in The Irish Times on July 20th, 2013.)

The doctor who had treated Dalton since the age of 16 termed him someone “suffering from severe strain and nervous shock sustained at a very important period of his life . . . All his impressions and hallucinations were referred back to those earlier years.”

Surely this dimension of postcombat stress and despair, for which there is considerable evidence alike in the newly released pension records and in other sources long available to researchers, requires exploration by anyone aspiring to produce an authoritative account of the mentalities and experiences of people involved in intelligence and assassination during the War of Independence. To allow that some of one’s heroes were haunted by what they had experienced, or were never the same afterwards, is not to argue that they had feet of clay.

Coogan says nothing new about crown intelligence. Nor does he explore the conundrum that, overall, this appears to have grown more effective after Bloody Sunday, as the British systematised record-keeping: fingerprints, photographs and card indexes replaced the memories of individual detectives shot on Dublin streets or terrorised into amnesia.

He discusses the stock villain Eugene Igoe, head constable of the Royal Irish Constabulary, on whose activities as head of a plain-clothes squad in Dublin Dan Breen expounded as early as 1924.

In the 1980s I published evidence indicating that a “secret corps” of RIC men “of courage and determination” was mooted not by Igoe, as Coogan writes, but by a secret committee that reviewed crown intelligence arrangements in December 1919.

These included the experienced magistrate Alan Bell, himself assassinated on Merrion Road in Dublin in March 1920.

Bell, incidentally, was not only inquiring into Dáil Éireann finances, as Coogan reports, but also investigating the attempted assassination of the viceroy, Lord French, in December 1919. This is clear from his notebook, which has been available for decades. Has Coogan consulted it or other intelligence material in British records?

Coogan does cite one file from the British national archives – although he does not provide a reference for it – in which details of Igoe’s RIC pay-off and pension, via an annuity, are discussed. Igoe was one of more than 150 RIC men who received special payments on foot of the risks they had taken.

But, for some reason, Coogan doesn’t bother to comment on the most interesting point arising from Igoe’s records, which is that this man, supposedly top of the IRA’s revenge list after the Truce, felt sufficiently safe to marry openly at Galway Cathedral in February 1922.

During the second World War, far from skulking under an assumed name in some obscure Antipodean backwater, Igoe worked in security at the Lough Erne flying-boat base in Fermanagh, and quietly lived out his days in Lisburn until his death, in October 1969.

Coogan’s latest work is best read neither as a reheat of old research nor as an attempt at forensic history but as a familiar and lengthy ballad or prose poem dedicated to a selection of untarnished revolutionary heroes headed by Michael Collins, contrasted with one monumental, cowardly villain in Éamon de Valera. Perhaps appropriately, then, his publisher’s imprint is Head of Zeus.

Yet despite this Hellenic tinge his most apposite poetic exemplar is not Homer, whose Iliad is peopled with flawed, truly human heroes, but John Keats, who concludes his meditation Ode on a Grecian Urn with “that is all/ Ye know on earth, and all ye need to know”.

The Twelve Apostles reflects just such an attitude towards the writing and reading of Irish history.