The Temple of Perfection: A History of the Gym, by Eric Chaline

Review: Exhaustive history of the gym takes us from ancient Greece to global business 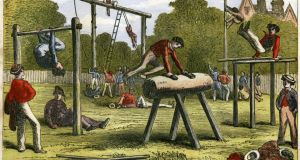 Book Title:
The Temple of Perfection - A History of the Gym

Why do people go to the gym? In this comprehensive history of the gym from its origins in the Greek Golden Age to the present, various answers are put forward: to train the body for war; to fulfil one’s deepest potential; to look like Superman; to fend off perceived effeminacy; to dominate the competitors and become the alpha male.

For Arnold Schwarzenegger, before he became the Governator, working out was a means to global dominion: “I was always dreaming about very powerful people – dictators and things like that. I used to always be impressed by people who could be remembered for hundreds of years, or even like Jesus, for like thousands of years”.

Eric Chaline, author of this history, suggests that, in the modern world, the gym functions as a “quasi-religious space” where devotees gather together to “wear special clothes, eat special food and take part in shared rituals that are performed with complete absorption and dedication”. For the ancient Greeks, the gymnasium was an important institution (the word derives from gymnazein, ‘to exercise naked’, and they did).

The decline of classical Greek civilisation and the rise of Christianity, with its denunciation of the body as sinful and its castigation of same-sex relationships as ‘sodomy’, meant that the gymnasium fell into decline for many centuries.

It was not until the late 18th century, when emergent nation-states warily eyed their neighbours and bemoaned the ‘effeminacy’ of their own citizens, that the gymnasium was revived. As well as providing training grounds for the production of better, fitter soldiers, the new gymnasia also served the physical education of children as part of a more progressive, child-centred philosophy of education.

In the mid-19th century, the burgeoning popularity and sophistication of the gym was one of many social changes sweeping across Europe.

Aided by a rise in the number of potential gym members with leisure time and disposable income, Sandow founded “the world’s first health-and-fitness business empire”. His flagship gymnasium, the Institute of Physical Culture, was located in the heart of fashionable London.

The 20th century was, of course, the American century. With the nation’s dream-machine producing ripped, square-jawed superheroes to project American military, economic and political might, a new aspirational body-image emerged: the Superman. As Chaline notes, modern American and ancient Greek culture have a certain amount in common, not least their individualistic ethos and its attendant competitiveness.

The new cult of the American body beautiful – the “hyper-muscular supermale” – found its home on Muscle Beach, California, where bodybuilders gathered to flaunt their bulging physiques.

With the rise of the mass media, some men began to feel discontented as they compared themselves to the supermasculine ideal. At pathological levels, this led to the condition known as muscle dysmorphia (aka ‘Bigorexia’ or ‘the Adonis complex’): a severe dissatisfaction with one’s imagined skimpiness.

Further health problems were created by the advent and misuse of anabolic steroids. Chaline points out that the hyper-muscular bodies familiar to us from bodybuilding contests and action movies were simply not possible in, say, the pre-steroids era of Eugen Sandow.

Two of the book’s most informative chapters are those which focus on women in the gym, and the gym’s role in the Gay Liberation movement, respectively.

In the former, Jane Fonda is a key figure. During the 1980s the actress became the poster girl for the “aerobics revolution”.

“Refuse to be afraid that we will no longer be considered attractive and acceptable when we are strong,” she exhorted her dance-class comrades. It is not coincidental that women are segregated to their own chapter; until recently, their role in the history of the gym was marginal.

Chaline has a particularly keen interest in how homosexuality has influenced, and been influenced by, gym culture from antiquity to the present. His analysis of the theme, and of sexuality in general, relies heavily on Michel Foucault. For instance, he wields a Foucaultian scalpel to show how the pederasts of ancient Greece, who enjoyed sexual relationships with boys and young men without suffering social disapproval, would have failed to understand modern labels such as ‘homosexual’, were we to go back in time and apply them.

The layout and atmosphere of the modern gym, Chaline argues, is the product of a long collaboration between homosexual and heterosexual males. He speculates on the evolutionary advantages of ‘the fitness body’ – the contemporary archetype of male beauty: trim, young, virile and muscular, well-known from advertising and cinema.

The Temple of Perfection is written in a soberly academic register, with occasional digressions on the author’s observations as a long-time gym-member and devotee of physical culture.

The historical and philosophical background to the development of the gym is well established, even overly so at times, with surveys of political and social factors leading us away from the subject at hand.

Chaline insightfully considers humankind’s beliefs about the body as they have changed across history, providing an ample account of the technologies, practices and ideas undergirding the honing of physical strength and beauty.

Rob Doyle is the author of Here Are the Young Men (Bloomsbury/Lilliput) and, due in 2016, This Is the Ritual