The importance of dissatisfaction to writing

I’ve never met anyone who was completely satisfied, content and happy who could write well, says author Michael Grothaus. Dissatisfaction is a writer’s most vital resource 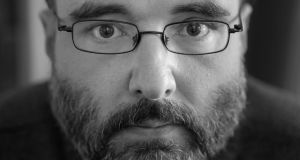 In my novel Epiphany Jones there are two main characters. There’s Epiphany, after whom the book is named, and then there’s Jerry Dresden. As you’ll discover when you start to read the novel, Jerry isn’t in a good place when the story begins. He suffers from a horrible psychological affliction where he sees people who don’t really exist. Not only that, he can also interact with these figments of his imagination – having conversations with them, even being able to “feel” them when he “touches” them – just as easily as you or I can interact with each other.

That’s not to say Jerry is a protagonist people don’t want to hang out with. On the contrary, his penchant for witty asides and dark humour make most readers I’ve spoken to latch onto him right away, and when they finish reading the book I’m no longer surprised to hear them say “I started off not liking Jerry too much, but by the end of the book I loved him”. What does strike me, however, is more than a handful of people now have added “You seem like such a nice, happy guy, Michael; I had no idea you had that much anger in you.” And some even finish that off with a “So, you were addicted to porn?”

But what those same readers are right about is the anger. That dissatisfaction Jerry feels? That comes from me – at least part of it. And it’s that dissatisfaction, I believe, that is essential to being a good writer. Why? Because I’ve never met anyone who was completely satisfied, content and happy who could write well.

These people are not bad or stupid or foolish – indeed, they are all very fortunate (which is just another word for blind luck). Yet because of this rare good fortune they’re happy with the status quo, which means they generally lack any significant dissatisfaction with the way things are. And if you’re a writer that’s a bad thing, because dissatisfaction is the single most important resource that writers have.

Dissatisfaction, used wisely, fuels action. It’s what gets you in front of your keyboard to write that story that holds a mirror up to society so it can see itself as it truly is. It’s what spurs you to write characters that challenge readers’ assumptions about why people who we would normally condemn and ostracise are the way they are. It’s what allows you to create worlds as which you wish ours could be (or warn against what ours may become).

One time in a creative writing workshop everyone passed their two-page short stories around the room. We all read each other’s and then went for drinks afterwards. Out of all the other people in that workshop, only one could write worth a damn. At subsequent drinks out and at the other workshops that followed I found out why: she was the only one who ever expressed dissatisfaction with the way particular things were – and she had a great many things to be dissatisfied about. But that dissatisfaction didn’t suffocate her, it fuelled her, compelling her to write – and to write both well and write a story that matters.

And before you get in your mind that she, or other dissatisfied writers, are loners who are sad or mopey or go around dressed like a goth at a funeral – that’s not the case. Dissatisfaction does not mean being miserable. It does not mean being pessimistic. It means you are a good observer (the most important trait of any good writer) and have the clarity to see things as they really are. Hell, the most dissatisfied people I know are usually the ones with the best senses of humour.

As for me, sure, I’m dissatisfied with things in life, which is the only reason why Epiphany Jones exists: our society’s obsession with celebrities when there are real issues to pay attention to; the prevalence of sex trafficking that goes mostly unnoticed; the hypocrisy of those who condemn people with addictions but have their own vices securely locked away from prying eyes.

But yes, I’m genuinely happy too; though I’m also happy to be dissatisfied where that dissatisfaction is justified. Dissatisfaction is a powerful tool for creativity and you can’t write well, or tell meaningful stories, without it.

Epiphany Jones is published by Orenda Books, at £8.99