Review: In unnervingly knowing prose, the Booker winner shows she is afraid of nothing 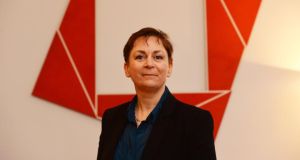 If Aer Lingus ever again has the money for those seat covers embroidered with lines from Irish literature, these are the two words they should stitch into the emerald polyester, laid out like the compact, caustic poem that they are. They are a returning emigrant’s eye-roll, a sigh sinking down through the inner monologue of Dan Madigan as he is driven from the airport by his older sister, Constance, to their childhood home in west Clare. The road after which Anne Enright has named her sixth novel is an actual road in that part of the country, running through the Burren and giving a view of the ocean, and hence beautiful, in a very, very Irish way, and hence difficult. In the words of Hanna, another of the Madigan siblings, this place, with its light and its fields and its islands, has always “made itself hard to see”.

The Green Road traverses 25 years. When Hanna makes that observation in the opening chapter, it is 1980 and her mother, Rosaleen, has taken to the bed because Dan, still high on the fumes of the pope’s recent visit, has announced his intention to become a priest. By 2005, in Constance’s boom-era Lexus, Dan is most definitely not a priest, though he does a fine line in pronouncement and (Constance is not able to stop noticing this) in camp, with his “nervous impeccability” and his secret engagement, actually, and his theatrical “Hell-oooo!”.

Meanwhile, Constance, who in 1980 was working in a Dublin chemist into which half of Ireland arrived with “a prescription for condoms folded four times”, is a mother, and the wife of a “Property Something”. She is also the Madigan child who came back to live in Clare, and therefore to be at the regular mercy of Rosaleen. Elsewhere in the family, there is too much drinking (Hanna, who has tried and failed to get into theatre ) and an attempt (the second brother, Emmet) to save the starving and malarial children of Africa, in camps and villages where the scent of death has “a chemical edge . . . like walking past the hairdresser’s at home”. Because every place is home, fundamentally. Or every place, very rudely and exhaustingly, points towards home.

What Enright has done with this novel is fascinating. It is Irish, or rather Irish-novelly, in such an unashamed fashion – the Mammy, the home place, the emotionally banjaxed siblings, the booze and the boom and the pill and the pope – as to be provocative. It does not simply take on, but briskly and grinningly grabs hold of, all the stuff that, these days, seems too embarrassing to bring up at the dinner table of Irish fiction. Then it makes itself all about language anyway, about the challenge and the doubling back and racing forward of getting the sentences right, of getting the shape of lived experience on to a thing as stiff as a page, reminding us – as we need reminding all the more these days, it seems – that experiment is not a matter of category, but a matter of approach and of nuance.

Rosaleen, speaking of dinner tables, sits at hers one night in November and writes Christmas cards to the four children who have (in her words) left her. And because they have all left her – even Constance, who comes every evening with groceries, and therefore especially Constance, who will not stay, this particular evening, for a cup of tea – Rosaleen decides, and she writes it on their cards, that she is selling the family home. And so home the four Madigans come, for the first time in years, from their separate damaged lives.

I cannot invite you home for Christmas, Emmet, now living in a housing estate in Dublin 24, wants to say to his Kenyan housemate, because I am Irish and my family is mad. And, back in Ardeevin a day later, all hell breaks loose. Of course it does.

Of the plot of The Green Road itself, this is, in a way, as much as needs to be said. And even to say this much about how things go, or about what this novel looks like, feels like a myopic stumbling off from the track that Enright has set down deep in its terrain. Which is not to say that this novel is anything close to plotless; in fact, in the same way that it is coming down with the stuff of Irish family, spilling over with the liquid nitrogen of silence and grievance and dread, it is a novel coming down with story. But it is a novel made more fundamentally out of that thing which must be woven into story, which is style, which is the stitching of technique and of sensibility without which story simply lurches along, blatant in its need of forbearance on the part of a reader asked not to enter but to believe.

In this novel we enter fully into the separateness maintained by each Madigan, a separateness in each case painfully achieved or at least attempted. In the chapters preceding the Christmas centrepiece, and in the tangents which push off from it, Enright depicts each of these brittle promontories magnificently, in the unnervingly knowing prose that is, by now, her hallmark; prose which somehow darts instantly into every fissure of a character’s conscious mind – as well as into plenty of those fissures of which that mind will be unconscious – while extending to the society and the culture in which the character lives the same forensic lens. The effect, for the reader, is of a combined giddiness and guilt at the extent of what can be seen; we cannot stop reading, but also cannot stop freaking out, that all the sorry, messy secrets of being human could be so utterly exposed.

Particularly astonishing is the portrayal of Dan’s time in New York in the early 1990s, as Aids is ravaging the gay community, a portrayal reminiscent in its power and sadness of Mark Doty’s poems from that decade, the poems of My Alexandria and Atlantis. Dan, though active, insists that he is not gay (“just very visual”), and refuses to ally himself to his dying friends and lovers, which is perhaps why the telling of the chapter in the first-person plural, a “we” at once arch and terrified, is so devastating.

Later, Constance’s experience of a mammogram makes for another viscerally brilliant scene, superb not just for its detail – anyone who has stepped into an Irish hospital will grimace in recognition – but for the compassion which Enright ekes out for and from her character, who is one of several anxious women in a place of silence and useless half-talk. On ageing, which she explores through the characters of Constance (“Looking up Pilates on the internet”) and Rosaleen (“From a distance, if you keep the hump out of your back, you might be any age at all”), but also through Hanna (“it was possible, it was more than possible, that the theatre was finished for her now”), Enright pushes her women to places as stark and luminous as those reached by the narrator in Marguerite Duras’s The Lover; like Duras, she is extraordinary on faces, on what they look like and on what they hold and betray.

Emmet’s aid work in Mali and the Sudan, meanwhile, is explored with a frankness about motive and deeper need that is all the more impressive because it never tips over into cruelty. And another of Enright’s remarkable studies of motherhood is found in Hanna, whose baby came out of her as a “little, opposite thing . . . [a] fight they wrapped in a cloth”.

Everywhere in this novel there are phrases and moments of that altitude, of that fineness, often sharply funny (“she got a slightly sarcastic feel off the ditches” is one of several lines I will quote to myself for the rest of my life) as well as sharply true, coming along with the story as though they come easy as breath. But they do not. They come only with a gift as forceful and as rare as Enright’s. This is an Irish novel that is afraid of nothing, least of all of being thought of as an Irish novel. “You know?” Dan says, close to the end of the novel, standing on the dark road in the middle of the night. “You could be anywhere.” But you are here.