The Golden Age review: A tough, intelligent story of displacement 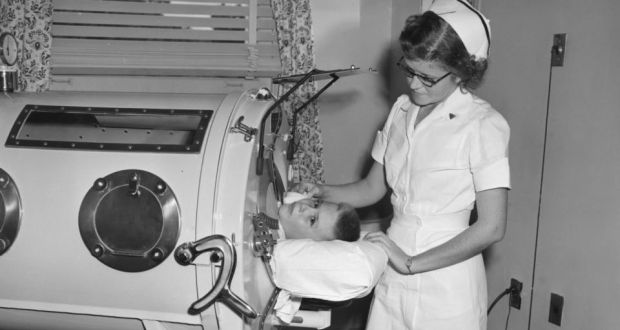 Literary setting: in Joan London’s novel Sullivan, encased in an iron lung because of his polio, is writing a poem about a ceiling. Photograph: Jonathan Kirn/Corbis via Getty

Frank Gold is almost 13, and although he is small for his age he is independent, resourceful, a bit of a liar, indifferent to rules; he has also been struck down by polio. His curiosity sustains him. When he is moved to the Golden Age, a children’s hospital, to recuperate, he soon asserts his detachment. Before that, when he first became ill, he had been sent to a large hospital on the outskirts of Perth. Most of the patients there were young single adults; he was the youngest. Whizzing about in his wheelchair, he chased nurses and carried messages. He was, for a while, “mascot, cupid, little brother”. Somehow during all this activity he also “felt a hunger to know why he was alive”. Frank is no ordinary boy, and he knows it.

An older boy, also a patient, detects the energy that sets Frank apart. Sullivan is a poet; he is writing a poem at the moment that he and Frank meet. Frank thinks that this is wonderful, yet, noticing that Sullivan has neither pen nor paper, challenges him. The older boy announces that he writes in his head; when asked about the title of his poem, he replies: The Snowfield. This confuses Frank, previously Ferenc, the son of cultured, chain-smoking Hungarian Jews, who have fled Europe and remain bemused by Australians. Why would anyone in Australia write about snow, he asks. Sullivan, wry and doomed, encased in an iron lung, explains that he is writing a poem about a ceiling.

Their chance exchange leads to a friendship and one of many memorable sequences in Joan London’s beautiful, assured third novel, which is about displacement in its various guises. There is no sentimentality; instead she is concerned with understated emotion as well as the festering anger and shadows that cling to people. London, an accomplished short-story writer, has been compared with Alice Munro, yet her cool, deceptively architectural methodology may place her closer to Marilynne Robinson, with discreet echoes of Patrick White.

This is a brilliant novel, astute and deliberate, almost brisk, if always human, rather like one of the several remarkable characters, Sister Olive Penny, lonely widow and mother of one adult child who had opted to live with an ordinary family and left her. As matron, she runs the Golden Age with genuine love and attempts to create a liberal home that will both appeal to the children who miss their families and also entice those, such as the cynical Frank, who have never previously experienced the ordinary.

Olive Penny is a strange, heroic character reflecting London’s achievement in a novel that will resonate in the imagination for many reasons.

Every character has his or her personal dreams, fears and regrets. Above all there is memory. For young Frank there is his time in hiding in Budapest, living in the care of his mother, Ida, music teacher. Fierce and unforgiving, she had been destined for a career as a concert pianist before the war changed all of that. The boy’s father, handsome, easygoing Meyer, is different. Having experienced a labour camp, the former businessman, who is now a truck driver, is happy to be alive – “Generally he left nostalgia to Ida. The past did not deserve it” – although he is restless and increasingly detached from his wife. Ida is a convincing study of a frustrated artist reduced to working for a milliner. For her Europe is the war, but it was also where her talent had been admired, briefly.

The main story takes place as Australia absorbs the effects of the polio epidemic that terrorised parents in the 1950s. After some doubt a royal visit by the young Queen Elizabeth II, accompanied by “her upright, hard-faced soldier prince”, goes ahead. The mid-1950s Australia that London evokes is one she just about remembers from her childhood; she was born in 1948. Her confident feel for the period makes the book live off the page.

Frank, writing his snatches of verse on a prescription pad that he has found, appears to be a natural survivor, in that he deals with his physical condition, which he manages to keep at a remove from his rampaging imagination. Thanks to Sullivan he has decided to be a poet.

On being transferred from the adult hospital to the Golden Age he feels that he must establish a symbolic distance between him and the other children. He does this with a cigarette stolen from his mother’s handbag when she is distracted. It leaves him feeling sick, but it achieves his purpose: he is no longer “a little kid . . . smelling of soap”.

In keeping with his poet’s soul Frank identifies a romantic object. Elsa is seven months younger – only she is not musing about love; she misses her bike and the outdoor life she had been enjoying as a strong, healthy girl before her ordeal began.

London juxtaposes the war being waged on children by the disease with the one that had ravaged Europe.

Shortlisted for last year’s Miles Franklin Award, The Golden Age won five of the major Australian literary awards. The facts of the story act as the main support arteries; the characters flesh it out. Frank is irritating, funny, believable and real. Sister Penny is utterly sympathetic, while in Ida everything that has been lost and damaged may still have hope of a revival, however symbolic.

Having stopped playing completely when Frank became ill, Ida is persuaded to perform a benefit concert for the children. She is reluctant but agrees. Meanwhile her husband, dealing with evolving tensions, has to contend with her temper. Yet it is only through her playing that he comes to some understanding of her. “I have to practise. Even for these people.”

Ida’s contempt for her audience is countered by her artist’s obligation to them and by her critical appraisal of her performance. Later, while visiting a family, she easily resists the charm of a fat baby that she believes is consuming its loving family.

The Golden Age possesses an authentic period atmosphere, and its story shifts effortlessly between several viewpoints. London’s strength is her poised, elegant prose and startling images; “Tiny birds hunched like a row of knots along the power lines”, the recuperating children are compared to birds “gathered at a water hole at sundown”. She often looks to the natural world that polio had stolen from the bedridden patients.

A subtle balance between stuffy interiors and the outside world is conveyed throughout. Most striking of all are the vivid impressions of how characters perceive each other; Elsa’s father Jack, gazes at the well-meaning Margaret: “Sometimes he couldn’t help seeing his wife as a sort of animal – dumb, fearful, intractable, or else lost in transports of joy. Her femaleness embarrassed him. While Elsa, swift and reserved, was the son he’d never had . . .”

Tough and intelligent, this rich, vivid and precise novel, which reads as a taut variation on Tim Winton’s Cloudstreet (1991), is tender and thrilling in its rigorous intimacy, as well as its literary allusions. A girl once regarded as a princess in old age retreats to a tower, admittedly a look-out point. London is very much concerned with how the Old World, in the shape of traumatised Europeans, encountered a New World dealing with its own problems. Instead of a shared past, London’s characters are attempting to shape a communal present.