The Best are Leaving: Emigration and Post-War Irish Culture, by Clair Wills

Review: About 1.5 million people have left independent Ireland since the 1920s – a fact largely ignored by the establishment here 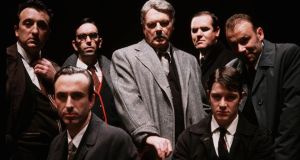 An emigrant classic: A 2001 Abbey Theatre production of Whistle in the Dark by Tom Murphy

As we enter this era of intensive commemoration of the “conservative revolutionaries” who planned and initiated the Irish Revolution and established the Irish State in the 1920s, the opportunity for self-congratulatory rhetoric is very tempting indeed.

One thing we will not be hearing much about is the abysmal record on emigration of the nationalist elite who have dominated the Irish State since 1922. Approximately one and a half million people have left independent Ireland since the 1920s, an exodus that continues today. These exiles have no GPO, no plaques, monument, not even a memorial. If New Ross or Cobh are intimately associated with the Famine exodus, Carlisle Pier in Dún Laoghaire or Westland Row train station, where the long journey to Holyhead often began, serve as sites of memory and commemoration for the 20th-century diaspora.

Plans were announced last year for a National Diaspora Centre which will “recognise” the Irish experience of emigration but this is largely a tourism initiative designed to encourage people of Irish descent to come to the country on the ethnic heritage trail.

When we do hear about the diaspora it is in connection with successful Irish-Americans who are movers and shakers in the global economy attending some global forum or another, usually slumming it at Farmleigh.

Irish society has never come to terms with its diaspora, and what it means to be Irish and not live in Ireland, beyond ethnocentric pride or ethnic tourism. For the most part, despite the rhetoric, emigrants and their descendants don’t feature much in Irish public consciousness. They left the country so no longer matter, except of course for the family and friends left behind, or more cynically as potential tourists.

This amnesia is especially puzzling when it comes to the “forgotten Irish”, who departed during the 1940s and 1950s and settled in Britain. All told roughly one million people emigrated between the second World War and the 1960s, a remarkable level of movement by any international standard. No politician speaks much about this group. Why? They don’t vote in Irish elections.

The shocking stories of how this generation, some now very elderly and frail, are wholly reliant on support from charities and Irish welfare agencies in London and elsewhere remind us how badly they have been treated by the Irish establishment. They are seen as a subject best not discussed, in that age-old Irish traditional way of dealing with difficult subjects. It has been our presidents who have courageously drawn attention to the contributions of these emigrants, most recently President Michael D Higgins, building on the work of his two predecessors, who have frequently visited Irish community groups and organisations across Britain.

Clair Wills’s new study of postwar emigration is therefore very welcome, bringing a subject in from the margins to the mainstream of Irish public culture. A literature specialist, she is a reliable guide to the work of writers such as Tom Murphy, Anthony Cronin and John B Keane, who charted in often very different ways the unglamorous dimensions of the lives of those who emigrated and equally those left behind. Murphy’s play A Whistle in the Dark (1961), for instance, is a compelling and disturbing meditation on the plight of the Irish in England. Wills’s readings of the plays and novels inspired by the post-war exodus is valuable and sure-footed.

One of the key issues examined by Wills is why a relatively small number of stereotypes encapsulated the postwar emigration both in Ireland and Britain. One of the most enduring ones was that the “best are leaving” and the associations between the decline of rural Ireland and mass emigration, and the dangers of urban life in pagan England. She shows how politicians, civil servants and clerics focused on similar themes, time and time again, as if to reinforce the message about the dangers of emigration, both for the individual and for the wider society. An investigation and interpretation of these “discourses” forms the central spine of this book, and this is well done and interesting.

In her earlier books on Ireland and the second World War and the Easter Rising in Dublin 1916, Wills displayed an uncanny ability to tell a good story in an engaging and informative way. This lightness of touch is not so evident here, in what is essentially a very academic treatment.

When Wills refers to “culture”, she has a specific set of books, journalism and films in mind. Taking it more broadly there may well be an opportunity for understanding some of the dynamics at work in Ireland during the 1940s and 1950s. While she alludes to distinctions relating to class, especially when it comes to nurse training and education, it never really features in the readings of texts and other sources, largely because the issue of class divisions is the great unknown element of modern Ireland, a place that some people seriously suggest was a “classless” society.

The story goes that the sons and daughters of the large “comfortable” farmers threatened their parents with getting the boat to England in the 1940s and 1950s. For these families, emigration to the industrial cities of Britain was seen as a social stigma, something the children of the landless labourers and small farmers did. The children of “respectable” families went to Dublin or Cork perhaps, but never to Birmingham or Luton.

The clash between the cultures of the post-war migrant generation with the emphasis on affluence, leisure and consumption and the more established class hierarchies of rural Ireland is a fascinating one touched on by Wills. When interviewed in Co Limerick during the late 1950s small farmers and labourers reported that for their children emigration represented an opportunity to get good, steady and well-paid work denied to them at home by the stronger farmers and small-town bourgeoisie, who along with the Catholic clergy and political class were the pillars of the Irish nationalist establishment.

Curiously Catholic identity or the Catholic church in Ireland or England don’t feature to any great extent, although she does acknowledge the importance of both briefly in the afterword. Whether Irish migrant culture can be separated from Irish Catholic identity is an open question.

For the post-war generation emigration simultaneously represented both opportunity and exile and the two worlds that the Irish inhabited in both Britain and Ireland. Wills’s book captures both of these dimensions with considerable insight and skill.

Enda Delaney’s most recent book, The Great Irish Famine: A History in Four Lives, was published by Gill and Macmillan in 2014.