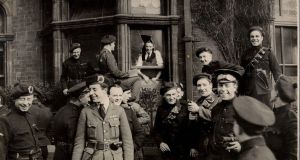 Bloodlust and revenge: Members of Auxiliary Division of the Royal Irish Constabulary

Book Title:
Havoc: The Auxiliaries in Ireland’s War of Independence

Surprisingly little is known about the auxiliary division of the Royal Irish Constabulary, which played a pivotal role in combating the IRA during the War of Independence. It might seem mean-spirited to assert that this remains the case even with this book, but we are still left in the dark about too many things relating to the force and its operations – and on the final page of Havoc we are told that “little is still known of this force”.

The information and evidence to fuel the hungry researcher are seemingly not available to the extent that a comprehensive and layered account of the force can be composed. Havoc trumpets the claim that it draws on “archival material from the bloody annals of British imperial policy”, but a paltry amount of archival material is used here. Of the almost 300 footnotes in the book, fewer than 20 relate to British archives; almost as much reliance is placed on a website, theauxiliaries.com, about which no information is provided in relation to provenance, context or authorship; it is just referred to as “recent research”.

To his credit, however, Paul O’Brien, who has written extensively about military strategy during the revolutionary period, makes effective use of Bureau of Military History statements from IRA veterans, House of Commons debates, military memoirs, and after-action reports by senior British officers, to provide witness accounts of the impact of the Auxiliaries.

These accounts are relied on too uncritically, but the detailed reconstructions of individual ambushes and attacks are well done, honed by O’Brien’s experience in military history. He knows a lot about guns and munitions and other military equipment, and about the degree to which the Auxiliaries used what was then considered cutting-edge technology, such as camera equipment.

At the Rathcoole ambush in Cork in June 1921, which resulted in the killing of two Auxiliaries and the wounding of 14, with no republican casualties, the IRA’s force, led by Paddy Byrne, “consisted of 140 men divided into 10 sections in which he had 61 rifle men, 50 armed with shotguns, a Hotchkiss machine-gun team of three and 14 armed engineers who were in charge of the seven landmines. Four battalion staff officers, six signallers and two medics completed the strike force . . . They had entered the fight with 40 rounds of .303 per rifle and 250 rounds for the Hotchkiss machine gun”.

Such attacks are a central part of the narrative, with all their attendant viciousness, and the revenge and bloodlust they gave rise to. One Auxiliary victim of the Kilmicheal ambush in November 1920, during which 17 Auxiliaries were killed, had “a large compound fracture of the skull through which the brains protruded, this being inflicted after death by an axe or some similar heavy weapon”.

Raised from among demobilised officers of the British army, the Auxiliaries were recruited from July 1920 in response to an escalation of conflict in Ireland. It has been common to apply the label Black and Tans to them, but the auxiliary division was a different group. Although both were there to reinforce the RIC, the division was a much smaller group, intended to be an elite cadre, or strike force, and was only nominally under RIC command.

The Auxiliaries were not “guns for hire” and never numbered more than 2,263, being well paid at £7 a week. A recruiting advertisement sought “ex-officers with first class record . . . Courage, discretion, tact and judgement required”.

Central to its creation was Winston Churchill, secretary of state for war, and it was a force, suggests O’Brien, that was “created and managed by politicians”. It reported directly to Hugh Tudor, police adviser to Dublin Castle, who insisted it would “take the war” to the IRA and make Ireland “an appropriate hell for those whose trade is agitation”.

A measure of the frustrations this book gives rise to is the assertion that “recent research reveals that 10 per cent of the Auxiliaries were Irish but the number could be considerably higher”. Surely this is the kind of detail that requires much more probing.

What compromised the division, aside from drunkenness and indiscipline, was the lack of co-ordination between the RIC, the British army and the directorate of intelligence in London. This gradually improved, and some of the Auxiliaries operated in plainclothes, working with an RIC intelligence cell, which also saw them targeting high-value individuals.

But the division was always undermined by the type of warfare being waged in Ireland. Auxiliaries were frustrated “if they could not identify a person as being a civilian or combatant”, and their lust for revenge grew, as seen in Galway, where Pat and Harry Loughnane, had their hands tied and were tethered to the rear of a lorry, dragged for miles and then executed.

In recounting these details O’Brien, is dispassionate and simply lays the details bare: of Harry, “nothing remained of his face except his chin and lips and the skull was entirely blown away”. No Auxiliaries were ever charged.

Unofficial violent reprisals were frequently raised in the House of Commons – “One must do the best one can” was one response of Hamar Greenwood, the chief secretary for Ireland – but the attendant publicity was damaging. As Sir John Simons wrote to the Times, British assertions of the rights of small nations were “nauseating cant” given the “deplorable excesses” of the Auxiliaries.

That cant was surely at its utmost when prime minister David Lloyd George asserted that when history came to be written, “the general record of patience and forbearance displayed by the sorely tried police, by the Auxiliaries as well as the ordinary constabulary, will commend not the condemnation but the admiration of posterity”.

In contrast, CB Thompson, the military adviser to the Labour Commission to Ireland in January 1921, reserved his most damning criticism for the Auxiliaries; the government had, he concluded “liberated forces which it is not at present able to dominate”.

The burning of Cork in December 1920 saw 40 business premises and 300 houses destroyed, but it is not made clear where the division of responsibility lay between the Black and Tans and the Auxiliaries.

Many of those involved were, according to one Auxiliary, “sodden with drink for some time”; as Nevil Macready, general officer commanding in Ireland, saw it, the Auxiliaries “treat the martial law areas as a special game preserve for their amusement”. As ex-military, they were unsuited to police duties, and they “fell between two stools, that of the police for administrative purposes and the army for operational reasons”.

Although, using stealth and surprise, they began to get results, they also cut many corners. Tudor struggled to control them, and although he dismissed more than 50 of them “in many cases a blind eye was turned” to looting and murder.

At the Clonfin ambush in Longford in February 1921, led by Seán Mac Eoin of the IRA, three Auxiliaries were killed and 10 were wounded, another reminder that the IRA was chilling in its targeting and that mines were timed with precision.

Urban battles and pinpoint assassinations also saw high casualty rates; two Auxiliaries were shot from behind in Dublin in June 1921 while shopping on Grafton Street. An estimated 60 Auxiliaries were killed during the War of Independence, but there is a lamentable lack of detail about those who we are told “died of suicide or natural causes”.

The disbandment of the division began in January 1922. This was not the end of the military road for many of them, and there is an interesting chapter on the afterlives of some, including Gerard Tynan O’Mahony, who went on to serve in the Middle East and later became manager of The Irish Times; Jocelyn Lee Hardy, who became a well-regarded novelist; and Edwin Barrows, who became, of all things, national secretary of the New Zealand Fruit and Produce Association. Almost 160 former Auxiliaries served in the Palestine gendarmerie.

With his focus on covert actions, snatch operations and assassinations of high-value targets, O’Brien makes the case for the auxiliary division as the “20th century’s first anti-terrorist unit”, which is a claim historians of various other, and earlier, conflicts might contest.

A central theme is that aligning with the RIC instead of the military hindered its operational capacity. With wonderful understatement, Joe Lawless, an IRA member, characterised them as “seasoned and tough fighters and the particular form of organisation was sufficiently loose in its disciplinary code to allow full scope to individual initiative”.

Frank Crozier, who had commanded the division until February 1921, struggled to find another official post; ironically, he even applied to the Irish Free State government for a position “in the maintenance of law and order in any capacity”. Wisely, the government did not take him up on his offer.

Diarmaid Ferriter, an Irish Times columnist, is professor of modern Irish history at University College Dublin and author of A Nation and Not a Rabble: The Irish Revolution, 1913-23 (Profile)