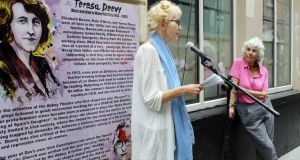 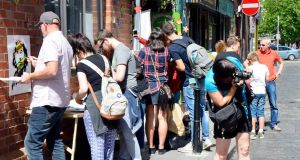 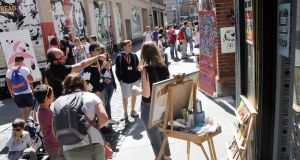 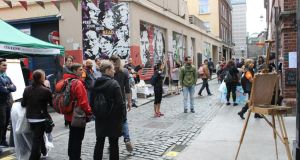 I’m a bit in love with The Icon Factory at the moment. I mean, what is not to love about a tiny group of individuals, who, with virtually no money and certainly no official backing, took on and transformed half a dozen lanes at the top end of Temple Bar, just by the Hard Rock café, that were once littered with dirty syringes, excrement and the general skuzzy detritus of urban abandonment, and turned them into living art installations featuring some of Ireland’s favourite icons, old and new, with a shop and an exhibition space – all artists welcome – attached?

The theory is that once visitors have enjoyed looking at the icons gracing the walls of the lanes they’ll come into the Factory and keep things moving with donations for prints/T-shirts/photos of same. The reality, of course, is that it’s kept alive thanks to financial input from Barney (€80,000 and counting) and unstinting and extraordinary commitment from an amazing artist duo, Aga Szot and Kevin Bohan, who have dedicated the last six years to getting the Factory, and the Walk, onto the map. And, of course, to many, many volunteers.

I first met the Icon crew in 2012 when I was mounting and curating an exhibition, Something About Mary, or 400 depictions from high art to street art to mugs and T-shirts of the BVM herself, in Ranelagh Arts Centre. Fellow scribbler, and very wonderful partner to Shane MacGowan, Victoria Mary Clarke, was opening the show with Shane and texted one day: “Go go go to the Icon Factory in Temple Bar they have FANTASTIC image of Sinead O’Connor as Mary!”

Two days later I came away with two Virgin Mary prints – Aga’s beautiful and soulful Sinead as the BVM, and Kevin’s richly ironic Modern Mary – plus friendships and promises of eternal support. All three Iconers came to the opening in Ranelagh with Barney riffing on the stranglehold the Dublin bourgeoisie have on art. On culture. Or as he has it on the Icon Factory’s home page: “It seemed to us that a seismic systemic failure across the entire landscape had occurred and that our former leaders, those who had taken us to this place, were the last ones likely to get us out of the mess.” Right on.

Four years later we meet again. Hello, lovely people! The lanes are now spankingly clean, the icon representation increased enormously. Will I please open a new section on Irish Women Writers? Indeed and I will.

A little puzzled at first at the selection – Lady Gregory, Countess Markievicz, Eva Gore-Booth, Kate O’Brien, Edna O’Brien, Teresa Deevy, Maria Edgeworth – but actually Barney’s selection chimes with this year’s revelation in the 1916 commemorations: the almost complete writing out of history, and power, of women once the “hard headed” men, the politicos, took over and Ireland’s independence began to be hammered out. The poets and visionaries had been executed; proponents of a stultifying conservatism, personified by De Valera’s disempowering “comely maidens dancing at the crossroads”, ruled.

These were women who, as Barney put it, expressed very modern ideas such as believing a woman’s place was not just in a marriage, subservient to a man. They were not welcome in the new, Catholic, conservative Ireland. Countess Markievicz died a pauper as did Kate O’Brien. Waterford playwright Teresa Deevy’s legacy has almost disappeared.

The opening of the new panels for Women Writers coincided with the Factory’s summer project – a festival of culture running for four consecutive Saturdays. How they put it all together is a mystery – hundreds of people visited, Aga calculates more than 1,500 – with singers, poets, musicians, dancers all taking part. Local businesses said they’d never seen such life on the lanes.

Of course, it all takes huge effort. Barney says his mum wanted him to be a priest, but that was never going to be a runner. However, she did infect him with a desire to do something for humanity. The Icon Walk is his give-back.

Strangely, while some funding has come from corporates like IPB Insurance, and cultural bodies such as the Irish American Fund, with terrific recommendations from sites such as TripAdvisor funnelling more and more visitors to the area, and all around praising the transformation of the lanes, none of the existing arts/culture/business bodies has truly stepped up to the plate. Not one! Not the Arts Council, not Dublin City Council, not Temple Bar Cultural Trust.

Barney, not one for mincing his words, believes it’s the Irish educational system which “fails people profoundly; they have no ability to make value judgments and are unwilling to risk anything they do not understand. They understand food for abandoned puppies and that kind of charity but the Icon Project is beyond them.”

Luckily none of the young people who crowd into the lanes for music from The Common Ground and The Pale, poems from Alice Kinsella and Eamonn MacUidir, folk dancing and ballet dancing lessons from Balfolk Dublin and Nova Dawn, have had their ability to judge distorted – here be young, multicultural, multilingual Ireland enjoying itself and making smashing art, smashing music and smashing poetry in the process.

And oh yes, I almost forgot: you paint an icon for these guys and you get a free exhibition in the Factory. Huzzah!