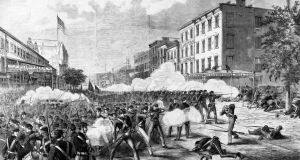 New York militia shooting during anti-Irish riots: Hirota argues opposition to Irish immigration, born out of sectarian prejudice and economic ideology, defined the development of US immigration policy in the 1800s. Photograph: Getty

America is being overrun by “a horde of foreign barbarians”, warned Massachusetts governor Henry Gardner in 1855: poor immigrants were swamping society, and mass deportations were required. Foreign countries were not sending America their best, but “dumping” what one Boston man called the “lazy, ungrateful, lying, and thieving”; the “outcasts” as a Congressional report put it. These people, New York officials said in 1880, should be “sent back”.

While some aspects of the Trump presidency often appear (in the president’s own phrase) “unpresidented”, the virulence of his anti-immigration language, and the radicalism of his immigration policy have deep historical roots.

In this fascinating new book, Hidetaka Hirota shows that 19th-century America was not a land of “open borders” but one shaped by a strident nativism directed against what many called “St Patrick’s vermin”. Hirota argues that opposition to Irish immigration, born out of sectarian prejudice and economic ideology, defined the development of US immigration policy in the 1800s and beyond.

The hellish poverty of 19th-century Ireland and the unimaginable horror of the Great Famine sent millions of desperate Irish people across the Atlantic in search of salvation. Those who survived the journey found a society that loathed what the religious thinker Theodore Parker called their “bad habits, bad religion, and worse of all, bad nature”.

Protestant New England saw Catholicism as fundamentally incompatible with the idea of America. As the nativist leader Samuel FB Morse – developer of the telegraph and Morse Code – put it, Catholicism “is opposed in its very nature” to “democratic republicanism”.

Hirota does not downplay this bigotry, but argues that the economic nature of anti-immigrant sentiment and policy deserves the greatest emphasis. It was the poverty of Irish immigrants that Anglo-Americans feared and detested most. For a nation whose ideology was built on self-sufficiency and work (“there is nothing here but work hard . . . and work harder tomorrow”, one Irishman wrote home in 1855), poor immigrants were like a virus: a nativist congressman called immigrant poverty “a disease, both moral and physical – a leprosy – a contamination”.

Fernando Wood, mayor of New York City, wrote to president Franklin Pierce in 1855 that poor Irish immigrants were “an enemy more insidious and destructive” than foreign aggression. From the 1830s to the 1880s, Hirota argues that the words “Irish”, “immigrant” and “pauper” became “virtually synonymous”.

Anger at the mass arrivals of the 1840s helped to create nativist political movements which fuelled a rabid public debate, attacked Irish communities in mob violence, and achieved brief but dramatic political success in the 1850s. The inaccurately named “Native American Party”, the “Know-Nothings”, won various governorships, big city mayoralties, and dozens of seats in Congress. They sought to restrict immigrant arrivals, lengthen the process of naturalisation, and deport poor and institutionalised immigrants.

Hirota argues that even though the Know-Nothings failed at a national level, and swiftly disappeared as an electoral force, their “radical nativism” outlived the party, shaping immigration policy and enforcement at state level in the Atlantic northeast.

Indeed, Hirota shows that state officials in Massachusetts and New York succeeded in deporting tens of thousands of Irish back across the Atlantic, both legally and illegally. The vague definition of citizenship in 19th-century America provided the poor, women, and those in care with little protection.

Mary Williams, originally sent off to America by her family “to conceal her shame”, was deported from a Boston almshouse, along with her US-born daughter, with what the Boston Daily Advertiser called less due process than “a tub of butter, or a barrel of apples”. Hugh Carr spent 13 years in Massachusetts, paid his taxes, and had applied to naturalise, before he developed a mental illness. State officials stopped the Carr family’s frequent visits to Carr’s asylum, and deported him.

While it only affected a very small fraction of Irish immigrants, deportation was a preoccupation of anti-immigration rhetoric and action. Hirota shows how the sweeping and often arbitrary power of Massachusetts and New York state officials led to “police power” becoming “the ideological backbone of American immigration control”, one that remains today in president Trump’s Executive Orders.

When rising anti-Chinese sentiment and a legal necessity for federal control provoked the first US immigration acts in the 1880s, it was the systems and practices of the north-east that provided the model. American immigration control never turned to ethnic profiling, exclusion and deportation: it was built on those bases.

Deportees found themselves adrift in their old homeland. In 1855 a Dublin constable found five women from all over Ireland “wandering about the quay, not knowing what to do or where to go”’ after arriving on a deportation ship. Officials in Cork who found women deported from American asylums decided there was “nothing for them but the workhouse”, though they complained about having to offer them any relief: “they ought not to come at all”.

Hirota emphasises how understanding the history of 19th-century Ireland and its people requires a global, not an insular, perspective. Many Irish came to America via Britain, and tens of thousands of Irish were deported from there back to Ireland as well. As with the American deportees, many had lived in Britain all their lives: an Irish workhouse noted one teenage deportee’s “thorough English accent”. Others were deported from these islands even further, to Australia. The Galway Vindicator complained that deportation was “revolting to humanity” and “repugnant to every notion of our vaunted civic and British liberty”.

The Boston Pilot decried “this vile tyranny which decrees that poverty, Irishism, and Catholicity are crimes”. But the Irish poor were effectively “rightless” and “stateless”, home or abroad, scattered across a vast imperial world with little more than the clothes on their backs.

It is impossible to read these stories without thinking of the Syrian refugees and Mexican immigrants facing demonisation and immigration control in Trump’s America. From its persecuted beginnings, Irish America itself became a home of racial prejudice and nativism, and it is a cruel American twist that many supporting bans and walls today bear surnames writ through 19th-century deportation lists.

This important book shows that both Irish America and Ireland have a historical responsibility to speak out for the poor and desperate tossed across oceans and borders seeking better lives and salvation. There but for the grace of time go we.

Dr Christopher Kissane is a historian at the London School of Economics and Political Science, and a BBC/AHRC New Generation Thinker