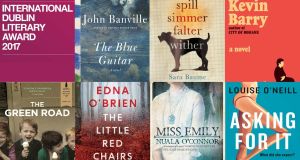 Also on the longlist are two Nobel Literature Laureates, four other Booker victors, including the 2016 winner Paul Beatty, and a host of literary and bestselling authors. Some 30 debut authors and 43 titles in translation also feature.

As always at this early stage, the longlist announcement is exciting as it testifies to the range and discernment of library readers in 109 cities spanning 40 countries.

The Irish writers nominated are John Banville for The Blue Guitar, Kevin Barry for Beatlebone, Sara Baume for her debut, Spill Simmer Falter Wither, Anne Enright for The Green Road, Nuala O’Connor for Miss Emily, Louise O’Neill for Asking for It, and most intriguingly of all, one of Ireland’s most enduring literary figures, Edna O’Brien for The Little Red Chairs.

The Dutch-language contingent has a strong presence headed by a potential winner Tommy Wieringa, with These Are the Names, translated by Sam Garrett. Also there are Esther Gerritsen’s Craving, translated by Michele Hutchinson and Jaap Robben’s moving You Have Me to Love, translated by David Doherty.

The US is the most heavily represented country with 43 writers, among them William T. Vollmann with his massive work, The Dying Grass, about the destruction of the Native American peoples. It is part of his Seven Dreams series and at more than 1,300 pages is the longest book nominated to date. Vollmann, who won the National Book Award in the US for Europe Central, has written 10 novels and is something of a cult figure. This could bring him to a much deserved wider audience.

Also representing the US and a potential winner is Viet Thnah Nguyen’s The Sympathizer, set in the aftermath of the Vietnam War and the fall of Saigon. Nguyen won the 2016 Pulitzer Prize and this novel should certainly make the shortlist.

The ever popular Anne Tyler is nominated as expected for A Spool of Blue Thread. Worth keeping an eye on is the progress of David Vann with Aquarium, and still savouring his Man Booker triumph is Paul Beatty with The Sellout, a more than apt title for describing the mire into which his country has lurched.

There are 23 British contenders including Kate Atkinson’s A God in Ruins, Patricia Hawkins’s still rampant bestseller The Girl on the Train, Sebastian Faulks for Where My Heart Used to Beat and William Boyd, a previous shortlist contender and another ever reliable storyteller features with Sweet Caress.

The Austrian-born Robert Seethaler’s Man Booker International contender A Whole Life, translated by Charlotte Collins, continues to show its appeal. Of the six German-language titles nominated, of particular interest are Monika Held’s This Place Holds No Fear, translated by Anne Posten, and Bernhard Alchner’s Woman of the Dead, translated by the Anthea Bell.

Orhan Pamuk, a previous winner, is nominated for his immensely readable if meandering A Strangeness in My Mind, translated by Ekin Oklap, while fellow Nobel Literature Laureate, Peru’s Mario Vargas Llosa, makes the longlist for The Discreet Hero, translated by a veteran Edith Grossman.

Twice previously shortlisted Algerian Yasmina Khadra must be seen as a likely challenger with The African Equation, translated from the French by Howard Curtis. Another previous winner, Michel Houellebecq, again lurks menacingly with Submission, a too-close-for-comfort satire about the Islamic threat to France. It has been translated by Lorin Stein.

With a contingent of 14 titles, Canadian hopes of a shortlisting may well rest with Patrick deWitt’s engaging Undermajordomo Minor, while former Booker winner and literary prize regular Margaret Atwood is nominated for The Heart Goes Last.

One of the most touching love stories among this year’s nominations is Dry Season by Slovenian Gabriela Babnik, with translation by Rawley Grau.

It is great to see Spain’s resident literary maestro EnriqueVila-Matas present and accounted for with The Illogic of Kassel, which has been co-translated with Anna Milson by 2014 co-winner Anne McLean.