Seamus Heaney and the Hedge School of Glanmore 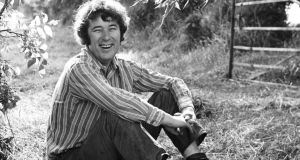 Seamus Heaney in Wicklow in 1971: “Often when I’m on my own in the car, driving down from Dublin to Wicklow in spring or early summer – or indeed at any time of the year – I get this sudden joy from the sheer fact of the mountains to my right and the sea to my left, the flow of the farmland, the sweep of the road, the lift of the sky.” Photograph: Jack McManus 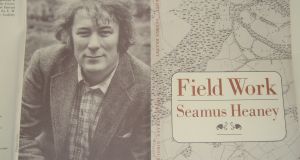 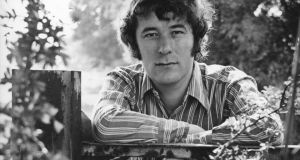 Seamus Heaney in Wicklow in 1971: “Glanmore truly was what I called it, a ‘hedge school’ in the literal sense. I gathered blackberries off the briars and ate them, as if I were back on the road to school.” Photograph: Jack McManus 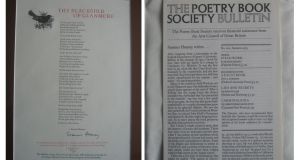 “Glanmore truly was what I called it, a ‘hedge school’ in the literal sense. I gathered blackberries off the briars and ate them, as if I were back on the road to school. I even found a blackbird nest in the hedge at our gable”.

A new exhibition is open until March 31st at the Seamus Heaney HomePlace, Bellaghy, Co Derry, which focuses on Heaney’s years in Glanmore, Co Wicklow. Using contemporary materials and interviews, Heaney gives his own account of the way in which Glanmore influenced his writing life and poetry. This is supported by copy manuscripts and typescripts from the Seamus Heaney Literary Papers at the National Library which show the creative process from initial first drafts to final printing.

At the end of 1971 Heaney returned to Belfast with his wife Marie and their two sons from a year as guest lecturer at the University of California, Berkeley. With two successful collections behind him (Death of a Naturalist and Door into the Dark) and another nearing completion, he had decided to give up his teaching post at Queen’s University and become a full-time writer.

He wrote an article for the Listener magazine on December 23rd, 1971 called Belfast’s Black Christmas, which painted a picture of a troubled city. “This morning I was stopped on the Falls Road and marched to the nearest police barracks, with my three-year-old son, because my car tax was out of date. My protests grew limp when the officer in charge said: ‘Look, either you go to the police station up the road or we take you now to Holywood’ – their own ground”. His release from Queen’s allowed the family to seek a more rural environment in which to write and a fortuitous offer to rent a cottage came from the Canadian academic and Synge scholar, Ann Saddlemeyer.

The cottage was in Glanmore, Co Wicklow and the family moved there in the summer of 1972. Heaney’s third collection Wintering Out was already with his publishers and was published in November. From a writer’s perspective the decks were clear to embark on new work. He already had some new poems written and he said of them that they “were written and rewritten a lot, a hell of a lot of rewriting. In a sense my writing habits changed, partly from having the time, partly being in Wicklow, the putting of the notion of being a writer at the centre of your lived, day-to-day life, rather than being a teacher who came home to be a poet” (Meeting Seamus Heaney, London Magazine, June 1979).

The new collection was North (1975) which drew heavily on Bog People (1969) by PV Glob. He bought his own copy as a Christmas present to himself and said “the minute I opened it and saw the photographs, and read the text, I knew there was going to be yield from it. I mean, even if there had been no Northern Troubles, no man-killing in the parishes, I would still have felt at home with that ‘peat-brown head’ – an utterly familiar countryman’s face”. (Stepping Stones: interviews with Seamus Heaney, 2008). Regarded as one of his major collections, there was only poem specifically referencing Wicklow – a soul-searching verse called Exposure, which is shown in the exhibition in two manuscript versions: one annotated and another with four stanzas, dated 28.11.73, plus one typescript version (seven stanzas) and a final version with 10 stanzas.

In 1976 the family moved to Dublin but the influence of Glanmore was celebrated when the next collection, Field Work, appeared in 1979. This collection is the focus at HomePlace this month. The book was awarded the Poetry Book Society Choice and in their Bulletin he said of the collection: “I think it might preserve more than the memory of scenes and incidents. Those four years were an important growth time when I was asking myself questions about the proper functions of poets and poetry and learning a new commitment to the art.”

The centrepiece of the collection is the Glanmore Sonnets, a sequence of 10 verses which he dedicated to Ann Saddlemeyer. One of the most well-known is Sonnet VII about the shipping forecast. It first appeared in print in the Listener in 1975 under the title Remembering Forecasts and there are copies of three different annotated typescript versions, plus a holograph version in the exhibition.

In 1988 he purchased Glanmore cottage from Saddlemeyer and it became a place to write during the week and a family retreat for weekends and holidays. The timing proved providential with Heaney being appointed Professor of Poetry at Oxford in 1989 with a remit to write 15 lectures over a period of five years. He later said of writing the first lecture, Redress of Poetry: “Nothing that had happened since we left Wicklow was more important to my writing life…. I was like a fugitive in a safe house. So it was in the cottage, in the early autumn of 1989, that the first lecture was written.” (Stepping Stones).

Two years later, Seeing Things was published and the centrepiece is a sonnet sequence called Glanmore Revisited with seven verses, of which number 4, 1973, is shown in typescript in the exhibition. It also included the poem Fosterling based on a Wicklow story about “the tree-clock of tin cans/the tinkers made”. The manuscript version in the exhibition shows this was written on a notepad with fold-over pages and multiple annotations and was probably written while on his travels, rather than at a desk.

Glanmore cottage was always a private place for Heaney but in 2005 a very special guest requested to see the place where he did his writing. The Empress of Japan, a poet and translator herself, was a great admirer of his poetry and was granted her wish to visit the cottage. Liam O’Flynn was invited to play the pipes but the cottage being small meant he played them in the kitchen while the Emperor and Empress were entertained in the sitting room. There were no photographs allowed of the visit but on return the Empress sent an “official” framed photograph of Their Majesties with a chrysanthemum emblem, normally only sent to heads of state, and this photograph is on show at the exhibition.

Heaney has said that Glanmore “saved my creative life. Sandymount is where my domestic life is lived, but Glanmore is where my imaginative existence feels guaranteed. I work more confidently and more productively there than anywhere else”. (Ashford Writers in Residence, 2006). It was also apparent that it was not just the place itself which was important but the journey from Dublin to his writing retreat:

“Often when I’m on my own in the car, driving down from Dublin to Wicklow in spring or early summer – or indeed at any time of the year – I get this sudden joy from the sheer fact of the mountains to my right and the sea to my left, the flow of the farmland, the sweep of the road, the lift of the sky.” (Stepping Stones).
John Dunne is curator of The Hedge School of Glanmore which is at Seamus Heaney HomePlace, Bellaghy, Co. Derry until March 31st
seamusheaneyhome.com