Roots, Radicals and Rockers review: putting skiffle back in the mix 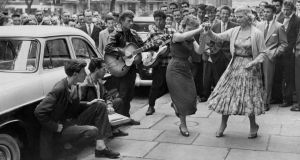 Dancing to a skiffle band during the Soho Fair in London. Photograph: Hulton-Deutsch/Corbis via Getty Images

Skiffle is one of those dead-end tributaries of 20th-century music, usually confined to a five-minute backstory segment in documentaries about the postwar British folk and blues boom. In Roots, Radicals and Rockers, pop-protest institution Billy Bragg seeks to restore its reputation as a form of radical roots music – outlaw art. He recognises its place in the “dead ground” (a term gleaned from an early stint in the army) between the second World War and Swinging London.

Scores of pop legends – The Beatles and the Stones not least among them – began as ragamuffin skiffle ensembles, but most (with the notable exception of Van Morrison) airbrushed it out of their biographies in favour of hipper Delta and Chicago blues.

Bragg writes with clarity and authority, descending into the archives to unearth the origins of songs such as Rock Island Line, which undisputed skiffle king Tony “Lonnie” Donegan learned from Leadbelly. (Donegan developed an extensive knowledge of American music while posted in Vienna on national service, listening to armed forces radio and honing his performing skills in barracks rooms.)

Bragg journeys deep into Americana to describe how Leadbelly – twice incarcerated, once for murder and once for attempted murder – transformed the song from a booster railroad anthem to a call for redemption, using his art to negotiate his freedom.

The author’s mapping of the roots of skiffle in New Orleans Dixieland jazz and ragtime is equally compelling, with thumbnail histories of Buddy Bolden, John Robichaux and Bunk Johnson. Sailor, adventurer and jazz obsessive Ken Colyer was instrumental in bringing this music to Britain. He returned from a Louisiana prison on a visa rap like some prophet down from the mount bearing the holy tablets that might illuminate a grim landscape of rationing, conscription and musician’s union rules, which often did more to inhibit enterprise and innovation than promote it.

Bragg renders the complexities of band sackings, defections and formations with a controlled sense of drama. In an inspired cross-cut, he describes Donegan recording Rock Island Line as Elvis entered Sun studios for the first time to jam That’s Alright on a Coke break, a sort of transatlantic origin story of modern pop. The timing was right: The single was released into a readymade market of Soho wide boys, spivs, Edwardian hoodlums, cosh-boys and creepers crawling in from Greater London looking for coffee and kicks.

Other factors prepared the ground for a youthquake: commercial TV, the singing cowboy craze, Slim Whitman and Johnny Ray, the latter an openly sobbing anathema to the British stiff upper lip, who, according to Bragg, sang with “his face fixed in a pained expression that suggested he was appalled by his own transgressive behaviour”.

Skiffle was the glue between young upstarts, the jazzers and the leftie beatniks. It had its roots in blues and folk but was rougher and rowdier, jerry-built and DIY – in Bragg’s own words, “high tempo three-chord thrash”. Skiffle was also a way to legitimise “Britons who wanted to play American roots music at a time when their contemporaries in the US were showing little interest in this old material. White American teenagers wanted to hear the new sounds of rock’n’roll, while the urban black population didn’t want to listen to blues songs their grandparents used to sing, music that reminded them of slavery and degradation.

Although its popularisers looked earnestly to the US for inspiration, skiffle in 1955 was an indigenous sub-genre of roots music that was only played by young white guys from Britain.”

The rest is history, but an under-reported one. Donegan became an unlikely star at home and in the US, but lived a double life, torn between the credibility he’d earned playing Dixieland jazz and the whiff of fad novelty that spawned scores of copycat acts. Bumbling into stardom, he picked his steps across a minefield laid down by purists who decried his English hillbilly shtick as the bowdlerisation of an artform – or worse, blackface minstrelsy.

Skiffle boomed between 1955 and 1958, its most notable practitioners being Donegan himself, The Vipers, Johnny Duncan and Chas McDevitt. Writes Bragg: “If the number of skiffle acts reaching the charts and crossing the Atlantic can be counted on the fingers of one hand, then those playing skiffle at grassroots level were legion. It is estimated that there were between 30,000 and 50,000 active skiffle bands at the height of the craze in 1957.”

Like all crazes, it flamed out, eclipsed by the folk revival and the coming R&B boom. But it placed guitars, washboards and broom-handle basses in the hands of thousands of young English musicians. This is a definitive history of that legacy.