Robert Tombs on writing his bestseller, The English and their History

The distinction between England and Britain needs no explanation to an Irish readership. You have a long, continuous history which did not stop with the Act of Union: why can’t England have its history too? 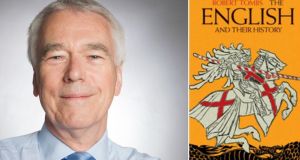 Robert Tombs: “I don’t think I’ve written a patriotic history; but nor have I written an anti-patriotic one. Both would be distortions. We are a rich country with many strengths, and our fortunate history gives us no excuse for our present socio-economic failings and political aberrations”

Academics don’t normally explain why they write books. It’s just what they do. Nowadays, they almost form a production line to help keep university revenues flowing and burnish their reputations as specialists – in my case, as a British specialist in nineteenth-century French revolutionary history.

So it was a little foolhardy to embark on something quite different: a very long book on England from its eighth-century beginnings to the present day, a subject I hadn’t studied since my first year as an undergraduate many moons ago. It’s the country I live in (albeit in a prosperous, cosmopolitan enclave – Cambridge) but which I don’t really know all that well. I’ve been to more parts of France than England, and I know Paris much better than London (and Dublin better than Liverpool, for that matter).

Of course, writing a book about something is a good way of learning about it. Not being a specialist has been an advantage – perhaps my only one. I doubt I’d have had the nerve to try it otherwise. Being a historian of France gives a different slant. One critic remarked that this was a book about England, but not a very English book. He didn’t mean it as a compliment, but I take it as such; and the ways the book has so far been received have made me more aware of its foreignness. It follows up themes that French historians are characteristically interested in, such as memory, continuity (the famous longue durée), geography and underlying political affinities. Had I not worked on France, for example, I doubt I’d have picked up the fact that Toryism today is strongest where Anglicanism flourished in the 1850s.

When I started about six years ago, it seemed a good time to write about England. The United Kingdom was devolving, if not dissolving, and the question of Europe was ever looming. It seemed clear that England was approaching some sort of crossroads, though I was certainly not prescient enough to anticipate the Scottish referendum seven weeks before the publication date, which necessitated the addition of a hastily written paragraph.

Many books on British history have rightly been accused of being really about England. Mine at least doesn’t have that problem: it really is about England. Ireland, Scotland and Wales are not patronised as junior partners; rather, they are treated as separate countries, like Holland, Norway or France. Some find this a little strange, as if only Britain can be a real object of history, and that the English don’t have a history, or not any more. A recent and influential historian even felt that he could only write a history of “the Isles”.

The distinction between England and Britain needs no explanation to an Irish readership. You have a long continuous history which did not stop with the Act of Union: why can’t England have its history too? Indeed, Ireland’s distinguished historiography was something I had in mind when thinking about this question. Moreover, when you take the long view, England’s relations with Scandinavia, France, the Low Countries and more recently Germany, the empire and America have been at least as important as – often more important than – its relations with the other island peoples.

Anyway, it’s we English who suddenly have to think about who we are and who we would like to be. “We are the people of England, and we have not spoken yet,” wrote GK Chesterton portentously over a century ago. Well, we still haven’t, and it’s not clear we really want to. But thanks especially to the Scottish nationalists and the leaders of the Eurozone, we may have to, and it’s far from clear what we’ll say. So far, the commonest response has been to give a two-finger salute to the political establishment by voting for Nigel Farage’s Ukip.

My historical contribution to English self-scrutiny surprises some people, and they don’t quite know how to take it. One newspaper suggested the book would please Nigel Farage; another thought it was one in the eye for Ukip. The reason, I think, is that I take a fairly optimistic view of English history and don’t wallow in the familiar “horrible histories” of squalor, oppression and conflict that have been commonplace since the late nineteenth century.

England has had a comparatively easy time over its thirteen centuries – largely, as David Hume pointed out two centuries ago, due to luck – and denying this seems to me blatantly insensitive to the experiences of much of the human race, including that part on the other side of the Irish Sea. But to point out England’s good fortune, which I feared might be criticised as a statement of the blindingly obvious, seems instead to expose me to the heinous charge of patriotism – pretty serious in a culture in which, as George Orwell joked, intellectuals would sooner be caught robbing a poor box than standing up for the national anthem.

I don’t think I’ve written a patriotic history; but nor have I written an anti-patriotic one. Both would be distortions. We are a rich country with many strengths, and our fortunate history gives us no excuse for our present socio-economic failings and political aberrations. Moreover, as some on the Left in England have suddenly realised with a shock, abandoning national identity to the extreme Right is a dangerous game. Extremism feeds on grievance and cultural pessimism: the belief that the country has long been going to the dogs. Well, it hasn’t been and it isn’t.

I don’t think I would have put this so bluntly had people (especially journalists) not kept asking me what my message was. Perhaps I should have said that there wasn’t one: history is a story, not a sermon. I hope I’ve told the story – or rather the stories – and given people enough material to make their own judgements.

Historians like to think, or at least hope, that history can play a part in public discourse, and even enrich it. It can help people to understand the place they are at, and how they got there. It can help them to form some view of what is characteristic about their society, why they think the way they do, what has gone wrong and no less important what has gone right in their history. All this affects their moral compass, loyalties and solidarities – what that great Dubliner Edmund Burke provocatively called their “prejudices”. People should be very wary, he thought, of tearing their country apart in a spasm of discontent, because they would do more harm than good. How right he was.

Robert Tombs is the author of The English and their History: the First thirteen centuries (Allen Lane, £35)

Caroline O’Donoghue: ‘There is a real anger in Irish millennials’
Real news has value SUBSCRIBE