Review: The Moral Economy: Why Good Incentives Are no Substitute for Good Citizens 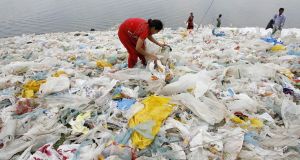 A woman dries plastic bags for recycling on the banks of Buriganga river in Dhaka, Bangladesh. he plastic shopping bag levy. Ireland’s levy on plastic bags proved effective, popular and had a long-term moral outcome (learning about a cleaner environment and doing something about limiting plastic waste). Photograph: Reuters

Book Title:
The Moral Economy: Why Good Incentives Are no Substitute for Good Citizens

It didn’t take the onslaught of the current crisis for economists and other social scientists to discover how morals and markets are related. One could argue with Albert O Hirschman that the very origins of political economy can be traced back to the motivational question of what holds modern “commercial society” (David Hume) together and how the right combination between moral behaviour and economic performance can be used not only to maintain freedom and order but also to create common wealth. Realising over time that unrestrained and unregulated markets did not produce beneficial outcomes for all (but only for the few), incentives were deemed crucial to steer interests and passions in the right direction.

However, the problem that emerged while thinking about means was this: what kind of incentives exactly would produce the desired effect? Discussing and designating limits for market action, exchange mechanisms and the applicability of economic reasoning to social problems are, as Michael Sandel has suggested, important to achieve that aim. Equally, Cass Sunstein’s plea for benign nudging (instead of grand designs and gestures) in the context of regulation is likely to overcome some of the short-term thinking of modern economic man.

Samuel Bowles doesn’t so much disagree with Sandel’s and Sunstein’s suggestions as draw our attention to another aspect: the false or erroneous assumptions that often drive policies and the thinking behind incentives. It has been observed time and time again that incentives often not only just don’t have the right effect, or remain neutral, but can be counterintuitive and crowd out good will or prevent solidary action from occurring. It is therefore crucial for any potential legislator to think through what exactly is at stake and how incentives can improve the situation and have beneficial long-term effects without the danger of crowding out good will and intention.

Irish readers might recall two recent examples which fit this description, one positive and one negative. The positive example is the plastic shopping bag levy. Here a negative incentive (paying an additional small amount) was introduced that proved effective, popular and had a long-term moral outcome (learning about a cleaner environment and doing something about limiting plastic waste). The contrasting negative example is the low tax incentive for multinationals. It left a bad aftertaste, not only in terms of a policy that wasn’t based on any real world evidence – after all, private companies and multinationals have never been put to the test on whether they come to Ireland in order to pay only 0.005 per cent on their profits instead of the already low 12.5 per cent – but also in terms of the signs it sends out to the normal Irish tax payer. Agreed that corporation tax and individual tax are not identical, it is still likely that any well-intended future initiative to raise taxes – for example to improve public health care – will from hereon be hard to find a sympathetic hearing for because the Irish tax payer will have been incentivised in how to behave not in a civil but rather in an egotistic manner – just like the coupon clippers of larger corporations.

Getting incentives right is therefore crucial, but it also means thinking through various starting assumptions – are humans all knaves or are they also capable of showing sympathy and solidarity? – and studying the potential impact of the means triggered by such world views. Bowles makes a point by doing exactly that. He looks beyond simplistic homo economicus assumptions that seem all too common in modern economics, and he discusses and weaves into his arguments discoveries from other social sciences, ranging from anthropology and sociology to psychology and modern evolutionary thinking. Equipped with the latest evidence from these fields (and economics) Bowles takes the reader through a range of social scientific games and experiments (prisoner’s dilemmas, public goods etc.).

Yet it is exactly this amazing display of scientific evidence that is puzzling. There is a strange disconnect between the stated aim of widening the horizon of our thinking related to economic performance and incentives, and the rigorous and, allegedly, “scientific” method employed. In terms of the means Bowles is obviously a hardcore defender of the social sciences as sciences. He seems unburdened by the question of whether it takes perhaps a more qualitative approach to understand the different customs and political cultures that influence and condition incentives. Bowles is not the first one to make use of the term “moral economy” and to provide evidence for its existence. British social historian EP Thompson, maverick economist Hirschman and social anthropologists like Marcel Mauss and Marcel Hénaff have all made inquiries into functioning moral economies and how markets and morals are related. However, few of them have reduced these workings to algebraic formulae or game strategies.

Another weakness is that Bowles relies far too much on economistic “straw man readings” of the classics, only to conclude what intellectual historians and other attentive readers of Hume, Adam Smith or Emile Durkheim knew all along. Thus, Bowles’ “discoveries” seem more directed at die-hard economists than those who always suspected that the world was more complex than could be expressed in an algorithm.