Prelude to the Holocaust: Pogrom November 1938, Testimonies from Kristallnacht review

Lack of a narrative analysis could put non-experts off but the contributions are significant, writes Robert Gerwarth 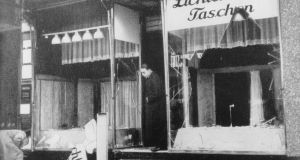 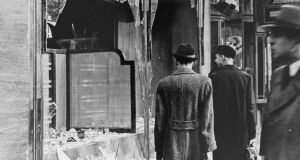 This important collection brings together a large number of documents and eyewitness accounts relating to the terrible events of November 9th and 10th, 1938. That night, on the orders of Adolf Hitler and his minister for propaganda, Joseph Goebbels, Nazi mobs across Germany, Austria and the Sudetenland desecrated and set fire to some 1,200 synagogues. In addition, they vandalised thousands of Jewish-owned shops and homes, maltreating or even killing many of the inhabitants along the way.

Often referred to as Kristallnacht, or “Night of Broken Glass”, because of the shards of shop windows that littered the streets of the Reich’s cities and towns on the morning of November 10th, the pogrom is widely seen as a key event in the escalation of Nazi anti-Semitic policies.

It was undoubtedly a watershed in the history of the Third Reich, although not so much because (as is often assumed) it foreshadowed the Holocaust that began with Operation Barbarossa in 1941.

Inadvertently, the pogrom actually saved many German Jews from certain death in the second World War, because the outburst of violence finally convinced many of those who had previously hoped to weather the storm of Nazi oppression that they had no future in a Germany ruled by Hitler. By late 1939 roughly half of Germany’s Jews had left the country and emigrated to countries that offered them safety.

Furthermore, the negative international and domestic responses to the pogrom, coupled with Hermann Goering’s complaints about the economic damage caused by the destruction of shops and property, led to a policy shift within the Nazi leadership. Up until November 1938, anti-Jewish outrages in Nazi Germany were more or less spontaneous and largely directed by a number of particularly anti-Semitic regional leaders such as Julius Streicher in Nuremberg or Joseph Goebbels in Berlin. After the pogrom, Hitler handed control over Jewish matters to SS general Reinhard Heydrich who pursued more “silent” (though by no means less radical) policies of persecution, notably enforced emigration and, after 1941, a combination of expulsions and mass murder.

Back in early November 1938, Hitler had used the murder of a junior diplomat in the German embassy in Paris, Ernst vom Rath, by the Polish-born Jew, Herschel Grynszpan, as an excuse for the pogrom. Grynszpan had committed the murder as an act of violent protest against his family’s expulsion from Germany. During their annual meeting in Munich to commemorate the failed Nazi putsch of November 9th, 1923, Goebbels acted on Hitler’s orders, calling on senior party members to unleash the fury of their local party paramilitaries, the SA, against the Jews. They responded and, fuelled by alcohol as much as by anti-Semitism, descended on Jews across the country. As the destruction proceeded, Jewish homes were broken into, and the occupants beaten up or, in at least 90 cases, murdered.

Hitler further ordered more than 25,000 Jewish men to be arrested and taken to the concentration camps of Dachau, Buchenwald and Sachsenhausen, leading to the deaths of hundreds more in the camps. The survivors were released only after agreeing to leave Germany for good. The intimidation through violence worked: tens of thousands of German Jews left the country. Soon, hundreds of Jewish emigrants found an opportunity to recount their experiences when the Jewish Central Information Office (JCIO) began to record eyewitness accounts and to collect letters and newspaper articles. Most of these sources and autobiographical accounts eventually found their way into the archives of the Wiener Library in London, today one of the most important institutions for Holocaust research worldwide. It was founded by Alfred Wiener, a German Jew who fled the Nazi regime as early as 1933, initially to Amsterdam and then, in 1939, to London.

In Prelude to the Holocaust: Pogrom, November 1938, Ruth Levitt and the Wiener Library have reproduced 350 key documents and testimonies from the library’s archives. Never before translated into English, they also form the centrepiece of an online digital database that was launched on November 11th last year, the 75th anniversary of the November pogrom. The sources assembled here are very different in nature, ranging from intelligence-style reports to factual accounts of properties and buildings destroyed or Jews killed or taken into custody. Other documents are personal testimonies of the horrors endured at the time, sometimes eloquent, sometimes raw and angry, sometimes full of fear and confusion. Particularly harrowing are the transcripts of letters from Jewish children fleeing Germany for England via Amsterdam in the wake of the pogrom. Often addressed to their parents or grandparents (who we now know most of these children would never see again), these letters powerfully document the sense of loss and confusion that many children, often separated from their families for the first time, felt as they were transported into an uncertain future.

The value of these testimonies lies in their colour and immediacy. From a scholarly point of view, they largely confirm the picture we already have from existing books. Yet what Prelude to the Holocaust achieves is to add another layer of detail to an otherwise familiar story of immense suffering. The book will primarily be of interest to students of the Holocaust and it is hoped that it will be widely used in classrooms.

Whether it is an ideal book for a general audience is more difficult to say. The main reason for that is the book’s lack of structure and general guidance for non-experts. The book reprints the testimonies with a minimum of annotation and contextual information. For that reason, Prelude to the Holocaust is not an easy read, as there is no thematic structure or narrative analysis that holds the book together. This was clearly a conscious editorial decision, a refusal to offer an easily digestible narrative, but some general readers will struggle to make sense of this postmodern arrangement. Despite all this, we should be glad that the Wiener Library has chosen to make available some of its important holdings on the November pogrom in this collection.

Robert Gerwarth’s books include Hitler’s Hangman: The Life of Heydrich