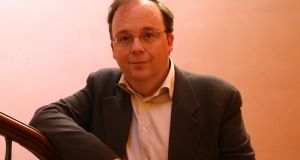 Most poets learn their trade by using “forms”: to write a sonnet, or a poem written in regular stanzas, is a sign of having studied the art and the ways in which line breaks and rhythms can generate interesting sounds and tones. Poets soon develop characteristic ways of turning a line, or stopping a poem, or reaching for image and metaphor. Then, formal choices act less like a vessel the poet fills and more like a divining rod or prospecting tool that poets use to bring them to the places they will find their material. But the material – historical, autobiographical, philosophical – will be altered and, the poet hopes, brought to poetic life by the way it has been mined. Sometimes, though, the formal choice, the sonnet or the stanza, is so insistently present that the reader may see hardly anything else in the poem.

Belfast-born and long resident in Oxfordshire, Peter McDonald showed, in his first books, an unusual flair for writing lengthy, often historical, narrative poems, though more recent work has been more sombrely autobiographical. His sixth collection, Herne the Hunter (Carcanet £9.99), signals another turn in his writing.

Divided in two, the book’s parts each consist of 18 poems. And each of those 18 poems in the first half is matched by a poem in the book’s second half, so that the first section’s first poem, Two Salmon, is answered by the second section’s first poem, A Brace, the first section’s Far by a poem in the second section called Close, A Sting by Boar, and so on. More ingeniously, A Sting and Boar are both sonnets, Far and Close are both villanelles, while A Brace and Two Salmon are both written in the ottava rima stanzas that Byron and then Yeats found so congenial.

Such a book-length mirror form will remind readers of Paul Muldoon, whose formalist style has so repeatedly and brilliantly inflected his material since 1994’s The Annals of Chile. McDonald’s work may also be compared to the Muldoon-influenced work of Scottish poet Don Paterson, who situates his lyric poems in book-length structures which often twin poems or double-back on themselves.

At any rate, McDonald’s structure draws his reader’s attention away from the individual poem and towards a consideration of his larger formal effects. When the book’s big formal machinery is so prominent, so much on the reader’s mind, it puts a lot of pressure on the individual poem to make its own individual mark.

The sonnet Partridge is one such success, making us hear and see the small, hesitant, titular bird:

A little squeal and then the sound
of a spring being tightly wound
in on itself, is all there is
at first, a sudden note and whizz-
whirr coming from the bunched-up grass

But in many of the poems, McDonald is not so attentive to the scenes in which he sets his poems. His formal choices and metrical pattern maintain a subdued, meditative and self-reflexive tone, which is pursued at the expense of image and narrative. Fine individual poems, such as Lebanon, and character studies, such as A Brace and A Coach and Horses, lose their effect in this context. McDonald’s tone is emphasised by a vocabulary restricted by his desire to hit the rhythmical mark, where phatic expressions and informal speech idioms are over-used: “all”, “very”, “now”, “still”, “nothing”, are required, too often, for rhythmic emphasis and also to disguise the strict form, and we notice, more than we should, the rhymes and idioms of a poem such as The Names:

and the names of the fields
were the names of the men;
like rent and yields
or distance then
all known, if you knew
such things as you did.
When a breeze came through
and my papers slid
just now all across
each other – a mess
of writing to toss
in the bin

Another Belfast native, Lorna Shaughnessy, lives and works in Galway, and her third collection, Anchored (Salmon, €12), is comprised of five sequences. The book’s long central section, ‘The Injured Past’, recounts a series of well-known incidents and places from the Troubles as it attempts to tell its story of murder and bereavement and remembering. The material has been the subject of so much writing and film-making that Shaughnessy’s poems call to mind her poet predecessors as much as the events, as when The Chosen (January 1976) begins:

He thought he’d breathed his last
when they asked his religion
And told him to step forward.
A workmate’s hand urged caution
but they hadn’t come for him.

But Shaughnessy’s poems do fresh imaginative work as well; they do not set out just to record what happened, and this sequence’s closing poem sets up intriguing images: “Behind us, / the words we have left on the shore / like ownerless clothes. // Before the heave to the other side, / terra firma, the hope of a new tongue, / the anchored tug and its cargo.” (The Crossing)

Anchored is a disparate book: other sections retell the story of Iphigenia, or focus on music and musicians, while illness is the subject of the section ‘The Dual Citizen’. Taxol, for example, turns illness into a striking story, ending “I am yew-burnt, / yew-red, new”.

And the book’s first poem, Crystal, begins with an image which thinks carefully about the difficulties of finding the right form for a poem: “The blower adds breath to heat, / turns and blows within the mould / until he finds precise form.” Fourteen lines long, the poem’s closing lines discover that “Mistakes pile up / waiting for the furnace, / a second chance, / instability anchored / by the weight of lead.”

John McAuliffe’s fourth book is The Way In, published by Gallery Press. He teaches poetry at the University of Manchester