Clarity and a delicate touch in two posthumous collections, plus works from younger poets 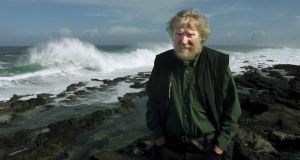 Dermot Healy: his poems give the words we use back to us, with a new dimension to them. Photograph: Alan Betson

The recent Poem for Ireland project offered a partial snapshot of an Irish poetics. While the majority of the 10 shortlisted poems took their bearings from WB Yeats’s Easter 1916 and directly engaged public or historical subjects, it was the most private and lyrical poem on the shortlist, a sonnet by Seamus Heaney, which was voted Ireland’s favourite.

The delicacy and clarity of Heaney’s poem (“her head bent towards my head, /Her breath in mine, our fluent dipping knives – / Never closer the whole rest of our lives”) are very different to Yeats’s strategic latching on to a historical moment. It is a reminder that poems are valued as more than supplements to the historical record.

Clarity and a delicate touch surely mark Dermot Healy’s The Travels of Sorrow (Gallery, €11.95 pb; €18.50hb), as does Healy’s death last year at the age of 66. The Mirror begins with a baby seeing itself for the first time in the mirror: its tale of conjoined twins, first separated and then reunited, is not a cause for satisfaction, but further meditation on loss: “You will be taken from me,/ the eyes said,// but the silence/ was never broken.” Alongside such silences, the book finds room for much music, songs for digging, a tribute to Liam O’Flynn, the blues, a robin’s sentinel song.

Healy had the rare ability to listen and hear things in our speech and our speechifying. His poems give the words we use back to us, with a new dimension to them. The Plough looks up as “the shape/ it once threw// moves on/ along the lazy bed of the constellations,/ like a letter in an old alphabet// whose sound is lost to the tongue;/ till, at daybreak, the work of the metaphor// is done.” It’s a description that is clear, daring, yet hedged with self-consciousness and an almost self-deprecating tone.

Any reader would wish there were more to come. More heartbreak, more (terrible) jokes (zen koans like Fetch: “If you want/ to break a dog’s heart/ throw a stone// into the sea.”), more transcriptions of the Sligo coast and clouds he wrote his books from.

Dennis O’Driscoll was a contemporary of Healy’s. He, too, was an utterly distinctive poet who developed a large audience for his work over a career in which his essays and reviews, as well as his poems, contributed strongly to the diversity and health of Irish poetry. His posthumous collection Update (Anvil, £9.95) is drawn from a file found on his computer which he had last updated a couple of days before his death on Christmas Eve, 2012. Provisional this collection may be, but it is as mordant and darkly effective as anything in Dear Life which won the Irish Times Poetry Now award in 2013.

The title poem is just one of those which address God from a secular perspective: “I still watch out for news of you,/ gossip column tittle-tattle, and – an obsessive/ divorcee – track your movements, eager / to learn which lovers have taken my place.” 2010s darkly imagines “Chancellor Merkel, stern matriarch,/ single parent of the EU family,/ incredulous at her spendthrift/ adolescent dependents”, while shorter poems characteristically pun on ordinary phrases: Blackrock Clinic begins “You take a turn”, which doubles as diagnosis and direction.

O’Driscoll is sorely missed by all readers of Irish poetry, something the poem Then brings home to us, reading as it does like an affecting out-take from Krapp’s Last Tape, remembering:

“the surges of unbounded joy

I felt, on better days, imagining

my highest hopes were still fulfillable.

There was everything to live for then.

It was all before me.”

Lost tribes and tribulations The title poem of Dave Lordan’s Lost Tribe of the Wicklow Mountains (Salmon, €12) offers a counterfactual picture of the “lost”, “waifs” and “vagrants,” and “ravers and wiccans”. Like many other Irish poets, Lordan

draws on ballads and performance traditions, although political point-making sometimes closes down the poems’ openness with rhetorical gestures, as when this poem ends: “It’s so just to ascend/ With the lost and forgotten// To summits the rooted/ Cannot even imagine.”

Likewise, his satirical portraits pick off targets predictably – of a Workmate, “Some of these ads she has/ auto-didactically// learned/ the dubbing of”; in Discover Ireland, one immigrant abbatoir worker is covered “head to toe, in hoof-shaped bruises./ Black-and blue patches,/ Reminiscent of cowhide.”

He is more amused and exploratory in odd-angled parables like Fertility Poem, where he devises a reading of graffiti that won’t sully his young daughter’s imagination (“It says COUNT, sweetie, COUNT”) or the riffing narrative of Irish History, which makes “religious appearances// in the Pub on Sunday mornings/ for rebel singsongs and barrels of stout// with all the other veterans/ of nothing much.” Other personifications, of Hope and Silence, range around, the latter from 1960s revisionism to a quotation from Hannah Arendt:

“Silence floats about the sixties seeing it all before

And whatever you think is going on back then it doesn’t happen.

It never ever. Silence do solemnly declare:

I am the national peaceful unity co-operation thingy.

I am fog on the lough, erasing shapes, maps, direction, memory.

I am the calm that has settled after all hope died.”

Kate Newmann’s Grim (Arlen House, £10) also takes one of Arendt’s subjects, the Holocaust, as its starting point. Attempting to represent dismal horrors and, to use Arendt’s term, the banality of evil, the poems are plain and clear, but Newmann also registers the difficulties attached to such powerful material. She knows the dangers of cliché and second-guesses her own language: “I don’t want to write/ how it was like being herded into a low byre’, she says in Like an Abbatoir.

Newmann knows her subjects must not be understood as an exception or aberration: the book’s most effective poems are those which struggle into quandaries, linking the Holocaust to a world we recognise. Göring and Göring considers the relationship between Hermann and his anti-Nazi brother Albert, and Good Boy! recounts Nazi experiments in human-canine telepathy, while other poems are haunted by images of the subsequent lives of the perpetrators and victims, in South America and Israel. Grim is a challenging book, but there is nothing glib about the way it responds to its historical material.

John McAuliffe’s fourth book, The Way In, will be published by the Gallery Press this month