Ireland and the injustices of history always fascinated me, says the British-Irish Inter-Parliamentary Body’s first co-chair, who puts it down to his Celtic roots 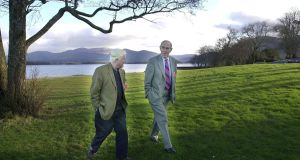 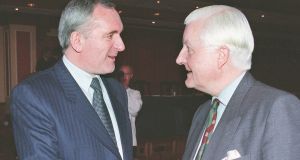 The then taoiseach Bertie Ahern talks to Peter Temple-Morirs at the 15th plenary session of the British-Irish Inter-Parliamentary Body in Cavan. Photograph: Alan Betson

This book is about events in the life of a politician. It is not an an autobiography but a selection of events of interest to a reader, ranging from Cambridge University to the House of Commons; to comparisons, revolutions, personalities like Margaret Thatcher and Mikhail Gorbachev, political defection and, of course, Ireland and the peace process, which together are prominent.

From the ultimate triumph of Tony Blair and Bertie Ahern with the Belfast or Good Friday Agreement of 1998, I go to Thatcher’s views about Ireland and the Irish and what it was like having private meetings with her at the zenith of her power. Then to a very different personality, Gorbachev, whose celebrated visit to Britain in December 1984 I hosted as chairman of the British Inter-Parliamentary Union. “We can do business with him,” Mrs Thatcher announced during this visit, which represented the beginning of the end of the cold war.

I can also give a personal account of the Iranian revolution of 1979 as my wife Tahere is Iranian. Due to the enormous loss her family suffered I have dedicated the book to them. In daring escapes, thank goodness none of them lost their lives. Again on the foreign side I even manage to be in Tiananmen Square in the early stages of the occupation, which led to the massacre some days later. The book is varied to say the least.

Ireland and the injustices of history have always had a fascination for me and I had a wish to contribute in some way toward better times. Time and again in Ireland I was asked why an English Tory like me was so interested in Irish matters. My answer was that I come from Wales and have a lot of Celtic blood in me. That seemed to do the trick and anyone who has observed how Welsh and Irish rugby supporters get on before and after matches will take the point.

My chance came when I was elected to the chairmanship of the British Group, Inter Parliamentary Union in 1982. I could take initiatives independently of government under our system. In Seoul, South Korea, of all places I gave a lunch attended in particular by Jim Tunney TD, parliamentary chairman of Fianna Fáil, and Kieran Crotty TD, who held the same office for Fine Gael. Also there was Tom Fitzpatrick TD, the then ceann comhairle. We got on straight away and a plan emerged to bring our two delegations and parliaments together. To cut a long story short after years of work, not least to get the British government to agree, which was helped by the Anglo-Irish Agreement in 1985, the British-Irish Inter-Parliamentary Body was launched at Westminster by the two deputy prime ministers, Geoffrey Howe and Brian Lenihan, in January 1990, under the joint chairmanship of Jim Tunney TD, and myself. It was a great moment.

The body had an illustrious membership and got off to a flying start and continued to deal with often difficult and delicate matters in a unified way. I think it fair judgement that no two countries could have better conducted a parliamentary contribution to a most vital historic cause. I hope two points in particular come out of the book. Firstly the fact that the body gave confidence to parliamentarians and governments alike that this process could be conducted successfully and that we got on with each other and could establish a mutual trust. This was very important. Second is that the parliamentary contribution gets the recognition it deserves. All too often the press go straight for those on high in government, forgetting that the base from which they operate is parliamentary. Parliamentary participation and support is very necessary for those in government who at the end of the day have to make things happen. What’s more, they are mutually complimentary in that the body had many ex-ministers and ministers-to-be. When the joint council of ministers met after the 1992 British general election, of the five present three were ex-members of the body, and on first name terms immediately, and a fourth, Patrick Mayhew, had addressed the body and knew it well.

The body operated in difficult times and we did our best to keep the peace process moving. John Major had no Commons majority and, being dependent on unionist votes, was between a rock and a hard place. Albert Reynolds desperately tried, with some success, to keep up the appearance of progress but this could not continue for ever.

In July 1995 I was privately asked by the Irish Government and political leaders, including Sinn Féin, who all requested to see me separately about the same thing when I was at at the Council for Peace and Reconciliation – to take a message to Major. This was that unless there was progress towards direct negotiation with Sinn Féin/IRA there could well be a recurrence of violence and there would be no way anyone could stop it. The message was ignored and Major gambled that he could get to the general election of 1997 by more playing for time. The result was the Canary Wharf bomb. All could have failed but the tremendous efforts and dedication of Tony Blair and Bertie Ahern which saved the day and eventually succeeded with the Belfast/Good Friday agreement. At times it was a close-run thing.

Last but not least comes my defection to Tony Blair’s Labour Party. The difficult time I had with the Conservative right-wing press over Ireland was a major factor in alienating me from my party. It culminated with a leading article in the Daily Telegraph, inspired by its editor Charles Moore, quoting from a newspaper interview I gave and urging my constituency party to deselect me. They took not one bit of notice but it was not a nice thing to have to go through. I decided to defect to Blair, with whom I had previously discussed Ireland, and I was happy as a social democrat.

However, when you defect you know what you are going to at the time you defect but you have no guarantee of what you will get at the end of the day. What’s more you have little power to prevent change you do not like. For me this means a continuing saga. Life is never dull. Would I do it again? No. Do I have any regrets for what I did? No. The reader must work out where the balance lies.