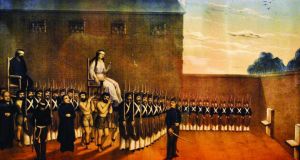 Revolutionary lives: the execution of Maria Camila O’Gorman, who was 20, and eight months pregnant, when, in Argentina in August 1848, she was executed with her lover, Fr Ladislao Gutiérrez

Book Title:
Paisanos: The Forgotten Irish Who Changed the Face of Latin America

Scour a map of Bolivia and you will find, tucked away in a southern corner near the border with Argentina, the Provincia de Burdett O’Connor. It is named after Francis Burdett O’Connor, the son of a wild and eccentric Cork family who fought in South America’s wars of independence.

Burdett O’Connor first signed up with the ill-fated Irish Legion before serving as chief of staff to Antonio José de Sucre at the epochal Battle of Ayacucho. He led the final revolutionary assault on Upper Peru, which, once cleared of Spanish royalist forces, was renamed Bolivia.

Sucre’s staff toasted the Irishman as “founder of the new Republic”, and he went on to map the borders of the new state. Burdett O’Connor also served as the Bolivian army commander in chief before retiring to the province that now bears his name (which he originally sought to call New Erin, in an effort to attract Irish settlers to its fertile valleys).

Burdett O’Connor is just one of the dozens of extraordinary figures who make up Paisanos: The Forgotten Irish Who Changed the Face of Latin America, a fascinating new book by the historian Tim Fanning. A rich collection of biographies expertly stitched into a broader historical narrative, Paisanos takes the reader on an epic journey from obscure townlands in Ireland to the Catholic courts of Europe and then over the Atlantic to the New World, where we make treacherous sweeps around Cape Horn, scale the Andes and slash our way through feverish jungle.

Despite the drama of the tale, Fanning makes no outrageous claims for his subject, unlike some previous writers looking at the Irish influence on world history. This is not a book about how the Irish saved or won Latin America. Instead it illuminates the largely secondary but nonetheless important and often fascinating roles they played over two centuries in shaping the region.

For readers already interested in Latin America the book’s great triumph is its rescuing from obscurity a large cast of Irish figures whose histories are overshadowed by the few big beasts, such as William Brown in Argentina and the O’Higgins clan in Chile.

As a book largely about soldiers, sailors and administrators who nation-built in previous centuries, the cast is inevitably largely male. Eliza Lynch, the Co Cork woman who became the national heroine of Paraguay, and whose reputation was rescued from more than a century of calumny with the publication of a 2009 biography cowritten by Fanning’s father, Ronan, features. So does the horrific tale of Maria Camila O’Gorman, who was 20, and eight months pregnant, when, in Argentina in August 1848, she was executed with her lover, a Catholic priest named Fr Ladislao Gutiérrez.

King of Spain’s chief minister Still, it is mainly a tale of Irishmen. Arguably one of the most significant of these was not even born in Ireland and never set foot in the New World. Richard Wall, the son of Jacobite refugees from Limerick, settled in Nantes, rose from page to the duchess of Vendôme, Marie-Anne de Bourbon, to the king of Spain’s chief minister in 1754.

In this role the genial Wall was responsible for employing fellow Irish paisanos as part of his effort to modernise his master’s increasingly backward realm. Under Charles III Wall set in train reforms that sought to wring more from the colonies through a policy of strengthening metropolitan control at the expense of local elites, a key reason for the king’s embrace of independence within several decades.

Once the wars of liberation broke out the Irish were all over the fighting. Fanning efficiently retells Bernardo O’Higgins’s role in liberating Chile and Brown’s in creating the Argentine navy. But, again, some of the richest material he turns up involves some of the era’s lesser-known characters – and what characters they were.

To read Fanning’s accounts of the picaresque lives of the Tipperary gaucho Peter Campbell, the Jacobite exile turned British spy James Florence Bourke, and the chancer in charge of the Irish Legion, John Devereux, is at times to wonder if he’s ripping some of his material from a hitherto undiscovered sequel to Barry Lyndon.

The Irish role was not just to provide colour to a long and brutal struggle. For every Devereux there was a Gen Daniel Florence O’Leary, Simón Bolívar’s idealistic aide-de-camp, whose multivolume memoir is still one of the most important historical sources on the South American liberator.

Many of these Irishmen were lured by adventure or promises (nearly always unfulfilled) of land and money. Before the revolutionary period Catholics such as Wall and Bernardo O’Higgins’s father, Ambrose, saw in Spain and its colonies chances for advancement abroad that the Protestant ascendency ruthlessly blocked at home. This meant serving a foreign imperial project – Catholic, but imperial nonetheless.

Rhetoric of liberty The revolutionary period saw an increase in the rhetoric of liberty. Several veterans of Vinegar Hill signed up for service under Bolívar with the son and nephew of his great Irish admirer Daniel O’Connell, sailing with Devereux’s Irish Legion.

This set off from English-controlled ports, however. London was the most enthusiastic European supporter of Latin America’s independence wars, not out of a benevolent desire to spread freedom but because it envied Spain’s trade monopoly with the region.

Many of the Irish fighting for someone else’s national liberation in lieu of their own did so with British imperial approval. As Burdett O’Connor would later write in his memoirs: “In the end, I began to suspect that we were working for the interests of English and French commerce and I was not wrong.”

Like much of the rest of Latin American history, this one has a melancholy tinge to its conclusion. But that should not deter us from rediscovering what is also a compelling chapter of Irish history.

In Latin America the contribution of these men and women is immortalised in public memory. But, as President Michael D Higgins points out in his introduction, the forgetting of these Irish lives is being done in the old country. The language barrier and our obsessive focus on the emigrant experience in North America and other English-speaking areas means that the Irish role in Latin America has long been overlooked.

Thanks to Tim Fanning we have no more excuses, now that he has written the first single-volume introduction to the subject in English, and a hugely readable one at that.