Nutshell by Ian McEwan review: ridiculous or rather brilliant

John Boyne on a novel narrated by an eavesdropping foetus: it is certainly Ian McEwan’s most intriguing book since On Chesil Beach 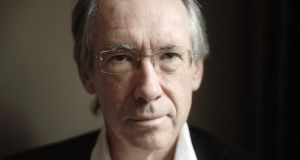 Ian McEwan: Nutshell, his new novel, features a foetus listening in on a murder plot

That book came to mind when I was reading Ian McEwan’s new novel, which has a similarly unconventional narrator: a foetus only days from birth who finds himself the unlikely eavesdropper on a murder plot. He listens, constrained and unable to act, as his mother and uncle plot the death of his father, recounting the events in a tone of such erudition and profound wisdom that one wonders what must happen between the birth canal and the midwife’s hands to diminish a person’s IQ so dramatically.

As a long-term admirer of McEwan, I must admit to being disappointed by much of his recent work. Solar came from the Howard Jacobson School of Comic Novels in that it never raised so much as a smirk, while Sweet Tooth seemed to betray, with a final, unforgivable twist, the unspoken agreement forged between writer and reader, an agreement referenced in that very book. The Children Act was a minor return to form but his last really substantial work was On Chesil Beach, almost 10 years ago.

Nutshell puts these disappointments to rest, however, for it is certainly his most intriguing book since that novella, recalling the darker short stories of his early career, the illicit family relationships that make up The Cement Garden, and the complex and deceitful relationships between men and women that lie at the heart of The Comfort of Strangers.

McEwan has long been considered a master of the opening chapter – the beginnings of Enduring Love and Atonement are incomparable – and here he makes even more of this talent with an opening sentence that sets out his stall in nine words: “So here I am, upside down in a woman.”

Foetus – let’s call him that, since of course he’s unnamed – is getting bored in the womb but has mixed feelings about entering the world since his parents have separated and his mother is having an affair with his father’s brother. (There’s an awful lot of close encounters of the penis kind with Foetus’s head, to which he naturally objects.) Familial disloyalty is thrown into the shade, however, when it becomes clear that Trudy and Claude are planning to murder her husband in order to inherit the £7 million London townhouse in which she has resided since the split.

The lovers’ criminal motives are perhaps the least convincing part of Nutshell. Trudy and John are married, after all, and she’s carrying his child; it seems a little excessive to murder the poor man when she could simply divorce him, take him to the cleaners and not risk a life behind bars. Also it’s not entirely clear why she’s leaving her kindly husband for his dim-witted and cliche-spouting brother. Perhaps it’s the sex, which is frequent and vigorous, but that presents problems too, for although I’ll be the first to admit that I’m no expert on women’s sexual appetites, I’m pretty sure that they’re not doing it five times a day when their waters are about to break. The reader will accept a certain amount of illogicality in fiction but when characters behave irrationally, the delicate architecture of a novel can begin to crumble.

Whether or not you appreciate Nutshell will depend to a great extent on whether you enjoy Foetus’s voice. He’s cultured and knowledgeable, knows his Sancerre from his pinot noir, can quote Hobbes and Darwin with ease and has some pretty interesting views on the Higgs boson. I’ve met some precocious children over the years but when it comes to an all-round knowledge of art, politics, science and the problems facing the Middle East, Foetus really takes the biscuit.

However, I think it generally works quite well, perhaps because it’s presented in a rather tongue-in-cheek style, but it took me a while to get there, so much so that I was moved to ask a friend halfway through whether he had ever read a book and been unable to decide whether it was utterly ridiculous or rather brilliant.

Much of McEwan’s work has been filmed over the years and a number of movies came to mind as I was reading this that seem like strong influences. Barbara Stanwyck sitting up in bed on the telephone crying “Help me, operator! I’m an invalid!” when she overhears a planned murder on a crossed line in Sorry, Wrong Number. When Claude makes his one interesting remark, “Ordinary people wouldn’t have the guts to do what we’ve done”, who can fail to think of smarmy John Dall dominating a trembling Farley Granger in Alfred Hitchcock’s Rope? And towards the end, a strange and rather terrifying sequence brings to mind the wonderful 1972 movie Sleuth. With its small cast of characters and single house setting, (like much of McEwan’s Saturday), this novel might not be destined for the big screen but it might make a rather good play.

As the tension builds, the protagonists argue and an inspector calls, the novel moves swiftly towards a dramatic and satisfying conclusion, McEwan proving as adept with his endings as he is with his beginnings. One both feels and fears for Foetus, who betrays signs of holding a grudge and planning revenge as soon as he’s out of nappies, although the reader can’t help but hope that he maintains his womb memories long enough to let his plans take shape.

So a strange sort of book in the end, an interesting experiment that mostly works, not quite comparable with his masterpieces but not as disappointing as his mis-steps. Still, if there’s any truth to the central conceit and babies can hear everything that’s being said while they are in the womb, perhaps that explains why they always come out screaming.