Nothing on Earth: Irish Gothic with a Latin American feel 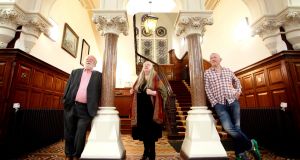 Funny how menacing an empty house can look; deserted, neglected, all that junk mail, yellowing, hanging limp from the dirty brass flaps in need of a polish. If a solitary house looks lonely, an abandoned estate looks even worse. Eerie, as if all the residents, even the squatters, have fled. Irish poet Conor O’Callaghan knew what he was doing when he set his remarkable debut Nothing on Earth in a half-finished housing estate somewhere in suburbanised rural Ireland.

Better still, he attended to the weather: dead heat, everything paralysed and gasping for breath. Clouds of dust rising from the ground and nothing better to do than to lie out under the pitiless sun like a lizard – or should that be a serpent? – if you are a young woman on your own with no job to go to and not much in the way of clothes.

There is an innocence about snow; heat is different. It makes for evil, wrongdoing. The small family reappears from abroad in the very place from which two now grown sisters once came. Are they prodigals? Perhaps – did they fall? Possibly? Most likely. Two sisters and only one husband, as well as a young girl, not quite a teenager but clearly no longer a child. The four set up home in the show house. It is a make-believe setting, bits of furniture like stage props and a picture complete with an elderly couple, generic grandparents, total strangers. Helen might be the name of the mother, but it doesn’t really matter. What is certain, we think, is that she is the mother of the girl, a child caught between languages just as she is caught between childhood and adolescence.

Overseeing the return of the prodigals is a Catholic priest, only too aware of the danger of being blamed. He is one of the witnesses, the other one is the girl, a Cassandra figure with no idea of the future because she may not have one. Her plight makes her more of an Antigone, she too roams a battlefield, even if her search is not about fetching a dead body, she is part of the trek party seeking water and other supplies.

The world is parched because it is under threat. Nothing on Earth, with echoes of the wasteland images of JG Ballard, is about the now. This is the frightened and frightening place we all recognise. It is unsettling to concede how science fiction filled with gadgets, yielded to the dystopian with its rigid codes of controlled, depersonalised reproduction; to where O’Callaghan brings his doomed survivors – a deserted house where the water supply is cut off and non-existent neighbours yell and stomp through the night.

Nothing on Earth, with its simmering menace and ambivalence, belongs to the Irish Gothic, a genre so persuasive and rooted in history that somehow even passing a ghost estate causes images of the Famine to come to the mind. Dead grass, Famine grass. The Irish landscape is rich in the ruins of castles, churches, cottages, decaying farm buildings – they create a collective sense of history of lives lived.

The ghost estates are different, they are about lives that never got going, the family homes intended for stories which never got told. This is where the Irish Gothic has arrived, via Neil Jordan’s The Dream of a Beast, another enigmatic odyssey suspended in deadening heat, the now – our now – a no man’s land cluttered with mangled shopping trolleys. No need for special effects, no Count Dracula scaling down a castle wall. Instead of blood, we, all of us, are scrambling for air itself. Our environment is under siege, natural crops can’t defeat the challenge of chemicals.

Are the family on the run? Only in a way, sort of… Paul goes to work until the day he is freed by being banished and he can burn his suit, an act which becomes a defiant ritual all of its own. One by one, the little group disappear. Nothing on Earth for all its cohesive Irishness is universal, a story about a vanishing world, which could as easily have been written by a Latin American writer. O’Callaghan is from Dundalk, border country, and he must have been influenced by memories of the disappeared. The border counties of Ireland, the beaches of Co Louth – not so very different after all from the wide grasslands of the pampas. It is closer to Latin American literature in conception and style than it is to either Poe or Henry James.

In placing Nothing on Earth, an Irish novel possessing international resonance, its clarity of vision and linguistic exactness invites comparison with Argentine Samanta Schweblin’s Fever Dream, translated by Megan McDowell. Both novels are ambivalent and terrifying; Fever Dream sees a young woman attempting in her final hours to push through the images crowding her brain. Her dilemma is easier to grasp, her enemy is the poison destroying her world.

O’Callaghan chooses something more mysterious; the present battling the past. There is a chance that instead of manmade poison as in Schweblin’s virtuoso slice of terror which is shortlisted for this year’s Man Booker International, O’Callaghan’s sacrificial lambs represent all of us.

Interesting to experience the way religion undercuts an apparently secular narrative. Or perhaps despite the presence of a Catholic priest, only too well aware that he has become an outcast, the personification of suspicion, no longer trustworthy, the real threat comes from superstition – how many fairy mounds were destroyed by developers? Are supernatural spirits exacting revenge? How many graveyards were bulldozed? Do the ghost estates, these damned sites, rest on the fields and tracts of grass where Famine victims died? The temptation is to hear in the voice of the priest, a hint of Conrad’s Marlow, another truth seeker.

Is O’Callaghan’s book terrifying? Yes. Is there a monster? No. The evil in man is from within, so O’Callaghan balances fear with humour and an all-encompassing sense of the inevitable. To read it is to think less perhaps of the 19th-century Gothic, which certainly wields its influence, yet even more powerful is Mexican master Juan Rulfo’s Pedro Paramo (1955), about a man who searches for his long-lost father and enters a town populated by the dead.

O’Callaghan brings his little family – his Holy Family? Certainly not – to a different kind of ghost town. The challenge is to decide who is dead? No easy answers. Therein lies the genius of an Irish novel which is international because it is a narrative of our doomed now.

Heart of Darkness by Joseph Conrad (1902)

Pretty much everything by the great JG Ballard, particularly in mood and imagery.