Looking at the Stars: an anthology to raise money for the homeless

Every cent of this book will go directly to the Rough Sleeper Team of the Dublin Simon Community. One thousand copies have been printed and so our goal is to raise €15,000 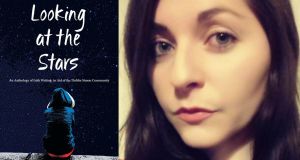 Kerrie O’Brien: Our Government is not doing enough for homelessness – so maybe we all need to do something as individuals – be it a gig, a bake sale, a sponsored run, anything. Human beings are begging and starving and dying on our streets. This cannot continue

In May I started talking to a young woman who was sitting on Grafton Street reading a book. I asked her if she had somewhere to stay that night. She told me that she had her own tent and slept in hidden places, avoiding hostels for fear of being robbed or attacked.

For a long time I had been watching the growing number of people huddled in doorways, queuing for soup and sandwiches outside the GPO, begging outside cafes, laying out sleeping bags and handwritten signs, essentially dying on the streets of Dublin. I had grown completely disillusioned with my Government for ignoring this crisis. Talking to that girl was the final straw for me and spurred me into action for a very simple reason; her name was also Kerrie.

That night, without expecting much to come from it, I put a call out on social media to see if anyone wanted to do a gig or an anthology to raise money for the current homelessness crisis in Dublin. The response was phenomenal. Patrick Cotter, director of the Munster Literature Centre, immediately offered financial support towards a book and two days later I met with Jonathan Weir and John Sansome from Dublin Simon Community. The passion they have for their work along with their incredible support and encouragement inspired me to make this a bolder, more ambitious project. I reached out to literally everyone I knew in the book trade and writing scene and many more approached me, most importantly Alice Kinsella who has aided me through six months of meetings, emails, coffees, press releases and edits.

Every cent of this book will go directly to the Rough Sleeper Team of the Dublin Simon Community. One thousand copies of the anthology have been printed and so our goal is to raise €15,000. It is exclusively available in Dubray Books, Books Upstairs and The Gutter Bookshop who all kindly agreed to sell it without profit.

The call we put out to writers was broad; it could be a piece relating to hunger, loneliness, human kindness, hope; it didn’t have to be directly related to homelessness. We found there were common themes running throughout the submissions we received, that one naturally led to the other and so this is how the work has been ordered.

Some of the pieces have been written by those who have been homeless themselves as I wanted to expose the reality of this situation in Dublin. With the help of Ailbhe Creane I sought permission to use certain pieces from Scrappy But Happy, a collection of artwork and creative writing from service users of the Dublin Simon Community. Some people could not be traced. Some had died. I am extremely grateful to those who allowed me to include their real life experiences in this book.

When I met Martina Bergin from the Rough Sleeper Team of Dublin Simon Community we discovered that our grandmothers were from the same tiny village in Offaly and that we had both suffered debilitating leg injuries last year. I had a long and immensely difficult recovery after breaking my foot in 2015. This made me realise how one event can turn your life upside down, how easy it is to lose everything and it ultimately made me want to do something to help combat homelessness.

This anthology has been entirely funded by The Munster Literature Centre, Dublin UNESCO City of Literature, The Irish Writers’ Centre, Poetry Ireland, Nessa O’Mahony and Mary O’ Donnell. I am immensely grateful to them for making this possible.

Our Government is not doing enough for homelessness – so maybe we all need to do something as individuals – be it a gig, a bake sale, a sponsored run, anything. Human beings are begging and starving and dying on our streets. This cannot continue. To quote Philip Larkin:

“We should be careful
Of each other, we should be kind
While there is still time.”