Life and death on the mean streets of ancient Rome 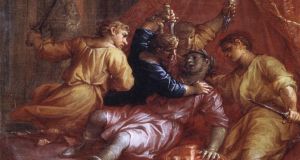 They were a crafty lot, the Romans, when it came to building dynasties, so perhaps it shouldn’t come as a surprise that Lindsey Davis’s latest novel arrives with the subtitle Falco: The New Generation . Falco was a private investigator – or “informer” – in classical Rome, but [CF413]The Ides of April [/CF413](Hodder & Stoughton, €19.99) features his adopted daughter, Flavia Albia, as she prowls the mean streets during Domitian’s repressive reign.

Commissioned to prove that the death of a young boy was accidental, Flavia finds herself out of pocket when her client suddenly dies. Realising that this is just the latest in a series of apparently random and inexplicable deaths, Flavia investigates further and discovers that the citizens of Rome are being picked off by a serial killer.

Falco fans might be disappointed to learn that the investigator is barely a peripheral figure in The Ides of April , but Flavia Albia makes for a winning protagonist. A widow who defies the conventions of the time by living alone on the Aventine Hill, she is a Roman with all that a citizen’s rights entail; as a former wild child from the farthest reaches of the empire, however, she retains an outsider’s cynical eye as she observes the more extravagant excesses of Rome. Irreverent, resourceful and hard-boiled in her patter, Flavia is a heroine to rival her contemporary counterparts VI Warshawski and Kinsey Milhone.

Hammett Unwritten (Seventh Street Books, €11.99) opens on New Year’s Eve in 1959, as the author Dashiell Hammett breaks into a house with a .38 in one pocket and his New York Times obituary in the other. Hammett, we learn, is searching for the “damn bird”, aka the Maltese falcon, that provided his debut novel with its title and arguably the most famous McGuffin in the history of crime fiction. But why would Hammett, who was dying of cancer and hadn’t written a word in decades, want the “bird” back?

Owen Fitzstephen’s novel is an ingenious blend of biography and mystery that flits back and forth in time, introducing us to the real-life characters who inspired Hammett’s version of events in The Maltese Falcon and who are now trying to track it down again.

The “bird”, apparently, is possessed of a mystical quality that confers success on its owner; when Hammett handed over the falcon to Moira O’Shea (aka the fictional Brigid O’Shaughnessy) in 1932, shortly after finishing The Thin Man , he also relinquished his gift as a writer.

A clever tale, then, told in the Hammett style, but the afterword by Gordon McAlpine offers another twist when it informs us that the book is derived from a manuscript discovered in Hammett’s belongings after he died, and that the name Owen Fitzstephen is eerily similar to that of Owen Fitzstephan, a character from Hammett’s The Dain Curse and an author of mystery novels who is taken to be Hammett’s alter ego. Even without the enjoyable metafiction aspects, however, Hammett Unwritten is a fascinating account of the sharp rise and very long fall of the godfather of the hard-boiled novel.

Donna Leon returns with The Golden Egg (William Heinemann, €17.99), the 22nd in her series of Venice-set Commissario Brunetti novels. The investigation Brunetti undertakes is an unusual one, as he is persuaded by his wife, Paola, to look into what appears to be the accidental overdose of a man who works part-time at their local laundry and who is presumed to be deaf and dumb and to have an intellectual disability.

Paola’s interest in the man’s death is motivated by guilt, given that she had never taken the time to learn his name, but from that tiny spark grows an increasingly fascinating case that sends Brunetti off in search of the truth of a man who, it seems, never officially existed.

It is a subdued, poignant and occasionally heartbreaking tale in which Leon offers an offbeat tangent to a staple of the mystery novel: the fabulously rich but dysfunctional family with a chorus line of skeletons dancing a cancan in the closet.

The introspective Brunetti, a man with a healthy sense of the absurd and a sharp eye for the fading grandeur of the city’s architecture, makes for good company as he negotiates the perilous labyrinth of Venetian police office politics .

Deceptively languid in its pace and a masterclass in mood, The Golden Egg may lack the high-octane thrills and spills of some of Donna Leon’s peers, but it is a meticulously crafted example of how even the most apparently innocuous of crimes can reveal a trove of history.

The story opens with Det Insp Leo Woods being called to the scene of a violent death in the plush Dublin suburb of Howth, where he discovers that Dermot Brennan, a builder-developer, has been bludgeoned to death. A revenge attack for a development that has become a ghost estate? A crime of passion perpetrated by a jealous husband?

The possible motives are many, and the subplots come thick and fast, but O’Sullivan can spin plates with the best of them, and the story, which feasts on headline-friendly drama, fairly races by.

Leo Woods is a memorable character, physically disfigured by Bell’s palsy and no less distinctive in terms of personality, a commanding presence in the professional sphere but dangerously prone to gaffes and misjudgments in his private life. A sympathetically flawed rogue – he has his local drug dealer on speed dial – Woods is elevated above the run-of-the- mill police detective by O’Sullivan’s sublime prose, which flashes with shards of poetry when least expected.

Studded with dark humour, elegant in style and clever in its execution, Crocodile Tears is a remarkably assured first outing.

Declan Burke is a journalist and author. He has just published the e-version of The Big O .