Kick Kennedy book reviews: She came, she saw, she partied 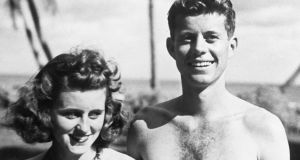 Kick Kennedy and her brother Jack, the future US president

In March 1941 the upper-crust English communist Decca Mitford sent her youngest sister a telegram congratulating her on an “excellent season’s duking”. Decca’s words were premature. Debo, a comparative moderate among notable extremes, had indeed bagged the dashing Andrew Cavendish, but the Devonshire title and the family seat at Chatsworth were destined for his eldest brother William, or Billy Hartington as he was known to friends.

“Duking” was what the London season was all about, although polite girls would deny it. In Hons and Rebels (1960) Decca recalled the “endless successions of flower-banked ballrooms filled with very young men and women, resembling uniformly processed market produce at its approximate peak, with here and there an overripe or under-ripe exception”.

Kathleen “Kick” Kennedy arrived in London on St Patrick’s Day 1938. Ripe at 18, and as yet unplucked, Kick was no stranger to European high society. She had already spent a year at convent school in Neuilly-sur-Seine, on the edge of Paris, where her generous allowance afforded her the best of holidays: skiing at Gstaad, opera in the French capital and a private tour of the Vatican before moving on to Venice and a fascist demonstration at the Palais des Doges, presided over by Il Duce himself.

A letter from Kick to her father gushes that she couldn’t help warming to “the magnificent” Mussolini, with his “big stride and even bigger grin” , as Paula Byrne quotes in her new book, Kick Kennedy.

By her own account a little bit short and lumpy, Kick displayed a “vitality” that marked her out among her fellow debutantes. Her ability to talk politics helped in a season dominated by the mounting crisis over the Sudetenland. Evelyn Waugh unmasked a further charm when he asked at dinner about the size of her “dot”. According to Byrne, Kick retorted that her navel was probably much the same as any girl’s. Only later did she learn that Waugh had been asking what kind of dowry a financier’s daughter could command.

The US ambassador, Joseph P Kennedy, well understood the PR value of his American family. After all, he had run three Hollywood studios, kept Gloria Swanson as a mistress, and in 1929 managed to walk away a millionaire mere weeks before the film industry succumbed to the crash.

From the first the British press chorused their praise for Kennedy’s brood of nine photogenic children. The ambassador’s outspoken politics chimed with Chamberlain’s, being firmly pro-appeasement and strongly opposed to any US involvement that might jeopardise the future of his sons, and of his own financial affairs. The trouble was that, as the year wore on, these views chimed less and less with FDR’s.

Kick’s fellow American Nancy Astor secured her immediate entree into aristocratic circles. Throughout the 1930s her Cliveden set, fictionalised by Kazuo Ishiguro in The Remains of the Day, maintained that an alliance with Nazi Germany would provide the necessary bulwark against the spread of Soviet communism. Lady Astor liked to boast that her parties brought together “thoroughly opposing elements – pacifists and fire-eaters, reformers and diehards, rich and poor, old and young”.

As anti-Catholic as she was anti-Semitic, Lady Astor nevertheless promoted the burgeoning relationship between her Bostonian protegee and Billy Hartington, heir to the most Protestant duchy in Britain. She seems to have developed a genuine affection for the spirited Kick.

As Barbara Leaming points out in her own new book on Kennedy, such “spirit”, demonstrated by Kick’s ability to laugh off the hazing she received at various stately homes (apple-pie beds, her left shoes stolen, being pelted with bread rolls), acquired an almost eugenic value among this “aristocratic cousinship”. Lady Devonshire, Billy’s mother, believed her son’s love match would contribute a valuable “life-force” to the family pedigree – once the girl converted to Anglicanism, as she surely would on seeing Chatsworth.

What this set could not account for was the sincerity of Kick’s faith, deepened by her loyalty to her devout mother, Rose. The Kennedys owed their position as much to Catholicism as the Devonshires did to Anglicanism. In May 1938 Kick was presented to the king and queen at Buckingham Palace. The following year the entire family attended the coronation of Pope Pius XII, whom Byrne describes as Rose’s personal friend.

The Kennedys were still in Rome when German troops invaded Czechoslovakia in March 1939. The ambassador returned to London out of step with the new public appetite for declaring war. Even Nancy Astor had changed sides. A year later Kennedy delivered a sealed message from Astor to his British counterpart in Washington. It described his views as “scandalous” and requested that a new US ambassador be appointed to the Court of St James.

Billy Hartington came of age in this graver climate. His father advised that marrying a Catholic was now out of the question, though the couple continued to dine at Ciros and go out dancing together. Rose held a similar conversation with her own rebellious daughter.

When war broke out Joseph Kennedy shipped his children back across the Atlantic. Roosevelt accepted his resignation in December 1940, after Kennedy declared in an interview, laced with anti-Semitism, that “democracy is finished in England”. This did not go down well.

Kick secured a secretarial job on a newspaper in Washington and hung out with Jack to distract her from ruing her lost life in London, but to no avail. In June 1943 she returned to the war-torn capital in a Red Cross uniform. Encouraged by her friends, Kick had decided to claim her man.

She found the ballrooms boarded shut. Cliveden now housed a military hospital; her dance partners were at the front while their sisters learned to scrub floors.

Billy had survived the battlefields of Flanders, and was eager to return to war. But the duke contrived to keep his heir safely at home by persuading him to contest the 1944 West Derbyshire byelection. To his consternation the seat went to a socialist candidate. Over champagne and lobsters Billy told Kick it would be impossible to inhabit Chatsworth after the war.

For months the Devonshires had searched for a theological loophole that would allow Kick to raise her children as Protestants without suffering damnation. The duchess, ever a pragmatist, considered her American grit a promising attribute for a dynasty that had lost the reins of imperial power. Rose Kennedy sent an archbishop to persuade her daughter to hold firm.

It was too late. Kathleen Kennedy and Billy Hartington were finally wedded at Chelsea registry on May 6th, 1944. Rose never forgave her. They would enjoy just four weeks of married life together. On September 9th Billy was killed following the liberation of Brussels. A month earlier Joe jnr, the sole Kennedy to attend Kick’s wedding, had died in a midair explosion.

The young widow never quite discovered what she was for. On May 13th, 1948, the light aircraft chartered by her married lover, Peter Fitzwilliam, crashed just outside Paris en route to Cannes. Kick was only 28.

Paula Byrne, an experienced literary biographer, declares a personal investment in her subject as the Liverpudlian descendant of “Irish Kennedys”. She accounts it a personal triumph that Kick ended her days as Kathleen Cavendish, marchioness of Hartington, buried at Chatsworth in a simple grave.

Barbara Leaming provides by far the more perspicacious and politically astute of the two books. Extensive interviews with surviving members of the Devonshire circle richly supplement the Kennedy archive to present a complex portrait of how English Protestant power and privilege came to admit this American Catholic during the social upheaval of the second World War.

Selina Guinness’s memoir, The Crocodile by the Door, is published by Penguin Ireland