Judas review: In Israel, who is betraying who? 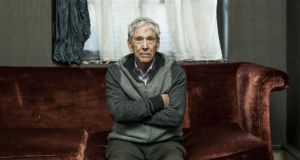 A bear-like young man named Shmuel is finally spurned by his exasperated girlfriend, who shrewdly marries a former beau. The rejected suitor shambles off in retreat from the world, or at least from his abandoned master’s thesis on “Jewish Views of Jesus”. Judging from the large slabs of text that litter the narrative, it may not be such a loss for mankind.

Asthmatic, emotional and more than wet, Shmuel, for all his love of spouting his socialist theories (– “he loved to lecture . . . to clarify, to state the facts, to contradict, to refute and to reinvent”), does not listen. He is not exactly a conventional romantic idealist, but nor is he a convincing clown. He cries easily and could quickly try the patience of even the most sympathetic reader.

Probable Nobel Literature laureate Amos Oz is a skilled manipulator, rarely more manipulative than here in this likeable, often irritating but deeply felt book, which may leave a reader tearing his or her hair but also thinking. Which is always a good thing.

Considering the frequent references to Shmuel’s physical appearance – his size, his hair, his bulk and his personal tics, including an embarrassing sexual obsession that threatens to scupper the novel – the most interesting thing about this not quite fully endearing goofball is that he is emerges as a hasty variation on the wonderful eponymous character from Fima (1991; 1993), an earlier and stylistically breakthrough work from Oz.

In common with Fima the man, a failed poet, young Shmuel is another would-be eminent thinker. But whereas Fima is 54, Shmuel is only 25, and his self-absorption is entirely predictable.

That is not to dismiss Judas, but to place it in context of an immense and important literary career. This most recent novel from the legendary Israeli, shortlisted for the Man Booker International Prize, resonates with intent and meaning.

Judas spans the winter months of 1959-1960; its narrative ambitions are overwhelming, and not merely for the hapless anti-hero. In exploring the origins of the Jewish-Arab conflict, Oz risks treading on everyone’s toes, including those of Christians who may wonder at the tender portrait of Judas, whose major crime is rooted in having believed too much in the powers of a diffident Jesus. The latter is presented here as a doomed youth, not as a man who nailed to a cross to suffer an agonizing death at the age of 33.

Oz’s long-time translator, Nicholas de Lange, had to negotiate a narrative written in prose that moves between contemporary dialogue – much of it rhetorical, overly formal and as stilted as it is knowing – to passages filtered through a Biblical register, which also includes direct quotation from the Old and New Testaments.

For Shmuel, aside from suffering a bruised heart, there is the practical matter of his father’s faltering business – and the end of the student allowance that had sustained Shmuel, who appears to use an unusual amount of talcum powder. Oz appears to have deliberately opted for an overly benign tone in this provocative novel, which is far more concerned with ideas than with the sketchy central casting characters.

Shmuel seems slightly unstable, “liable to veer from wild enthusiasm to disappointment and back again”. He is just the sort of person who would have a dream in which he meets Stalin – and he does have that dream. Throughout a slow-moving and often ponderous narrative, Oz repeatedly describes the bearded and shaggy-haired Shmuel and his lumbering gait. For fear readers may be concerned as to whether or not the poor fellow is feeding himself, there are regular bulletins on how much bread, cheese and yoghurt he quickly consumes.

Oz, who turned 78 on May 4th, commands undisputed respect. It is a case of read what he writes and ask questions later. As a novelist, he first emerged as a polemicist using fiction as a forum for his concerns about his country, which he loves without liking it all that much. He believes in the co-existence of Arabs and Jews, side by side, not in two separate states. Many of Oz’s critics regard his voice of reason as treasonous. With time, his passion for justice has remained central to his work, yet his novels from mid-career (To Know a Woman, Fima, Don’t Call It Night, Panther in the Basement, all translated by de Lange) have become increasingly polished.

Judas returns to the earlier work, though Shmuel, his head seething with ideas, is not the young Oz. Instead the author identifies with another character, Shealtiel Abravanel, an invention whose impassioned views about the need to reconcile and live together made him an outcast years before his death. All that remains of Shealtiel is Atalia, his beautiful and embittered widowed daughter, who now shares a house with her father-in-law, Gershom Wald.

An elderly thinker, Gershom is in need of a companion, a sounding board to engage in debate and trade ideas. Answering an advertisement, Shmuel joins the dark, gloomy Jerusalem household that resonates with history. Oz evokes the city, with its many dark alleys, cats and stray dogs. The young man becomes mesmerised by the middle-aged beauty who had been briefly married to Gershom’s brutally murdered son.

Sex for Atalia is a service she exacts in return for her worldly advice. Smelling of violets and repeatedly described, she proves the most false note in Judas. Yet the novel is about confused interpretations.

The name Judas is a byword for betrayal, and betrayal is another prevailing theme. The house is Jerusalem; the characters exist in a suspended state of freefall, and they know it. They endure, no more or less. Just as Judas misread Jesus, Oz appears to be saying the world has misread Israel, only no more than Israel has managed to misread its prophets, its history and its intentions.

With Judas, which is more loving tract than love story, Oz returns to the past by articulating a hint of “I told you so”. But he is without anger, only weary regret tinged with a wistful hope for eventual change.

Eileen Battersby is Literary Correspondent and author of Teethmarks on My Tongue.