Ireland’s war poets and writers, from WWI to the Troubles 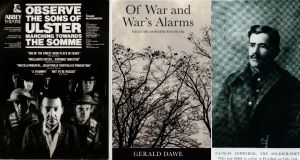 Gerald Dawe: writers provide a sense of new beginnings from Ireland’s “local” war to the European and migrant experience of the present day, which critically represents a revision of our various histories into a more complex story we can finally all share

Of War and War’s Alarms explores some of the literary implications of wartime in the context of 20th-century Irish writers who bring a hybrid self-consciousness to their work, from Thomas MacGreevy and Christabel Bielenberg to Charles Donnelly and Padraic Fiacc, and my own growing awareness of war as a lived and imagined reality.

Samuel Beckett, a near contemporary of poet Charles Donnelly, who died fighting in the Spanish civil war, had experience of war at first hand, in Paris during the German occupation, when he worked as a member of the French resistance (for which he was later honoured by the French government; “boy scout stuff” is what he called it), in Roussillon with his partner, Suzanne, and after the war, working as a volunteer with the Irish Red Cross in the destroyed town of St Lô in Normandy. In 1946 Beckett had written at least one poem, Saint-Lô, directly out of these experiences; it was originally published in June of that year in The Irish Times:

Vire will wind in other shadows

unborn through the bright ways tremble

and the old mind ghost-forsaken

sink into its havoc.

There is also Beckett’s powerful radio script, The Capital of the Ruins:

Saint-Lô was bombed out of existence in one night. German prisoners of war, and casual labourers attracted by the relative food-plenty, but soon discouraged by housing conditions, continue, two years after the liberation, to clear away the debris, literally by hand.

No wonder many critics see the second World War as having a pervasive influence throughout Beckett’s writing, from the devastated landscapes to the black humour. War in Europe – and its legacies – is as much a part of Irish writing in the twentieth century as the more exhaustively examined themes of religion, land and the politics of cultural identity.

Since starting the preliminary research for this book and the anthology, Earth Voices Whispering (2008), I identified many more men and women poets, several forgotten and neglected in the cruel ways of literary history, all of them with valuable poems about war. Here are but a few names that come to mind: Sean Jennett, Faber poet of the 1940s, now little known; women writers such as Mary Davenport O’Neill, Sheila Wingfield, Rhoda Coghill, Eileen Shanahan; John Gallen, Captain with the Royal Irish Fusiliers, killed in action in India; Leslie Daiken, who served as a private in the Irish Army during the second World War and who edited two important anthologies, Goodbye Twilight: Songs of Struggle in Ireland (1936) and They Go, the Irish (1941) ; Ewart Milne, a Medical Aid volunteer during the Spanish civil war; a further Spanish civil war activist, Thomas O’Brien; Patric Stevenson, born in England of Irish parents, who served with the Royal Air Force; Patrick Maybin, who served with the Royal Medical Corps in Africa and Italy.

Many other writers would be much more familiar to readers of Irish writing, such as Francis Stuart, Louis MacNeice, Eoghan Ó Tuarisc, Padraic Fiacc, John Hewitt, Roy McFadden, Robert Greacen and Thomas Kinsella. And some ( I suspect) a bit of a surprise, such as Omagh-born, Trinity College-educated Jimmy Kennedy whose 1939 lyric, We’re Going to Hang out the Washing on the Siegfried Line, became for the Allied Forces the theme-tune of the second World War, even provoking a mocking parody in German.

The list takes the reader chronologically to a further recognition of how many contemporary Irish poets – by which I mean those born in the late 1930s, 1940s and 1950s – have written out of personal exposure to the influence of world events, such as the world wars and the Holocaust. Derek Mahon’s retrospective view in his poem, Autobiographies, as the adult man recalls witnessing as a young boy the ceremonial end of war is emblematic of the poet’s “observational” role:

But I do remember one time

(I must have been four then)

Being held up to the window

For a victory parade –

Gracie Fields on the radio!

Americans in the art-deco

A male child in a garden

The poetry of the First World War that we associate with Michael Longley; the foundational scholarship of Terence Brown and Edna Longley; Frank McGuinness’s groundbreaking play Observe the Sons of Ulster Marching Roward the Somme; the novels of Jennifer Johnston and Sebastian Barry, among others, certainly broke the taboo surrounding the Irish presence before, during and after the Great War.

Indeed, more than any other contemporary Irish poet, Michael Longley has written heartrending poems, not only on the first World War, but also crucially on the Holocaust, such as in the following extract from part IV of Ghetto:

From among the hundreds of thousands I can imagine one

Behind the barbed-wire fences as my train crosses Poland.

On his hair and schoolbag, and then I am transported

Away from that world of broken hobby-horses and silent toys.

He turns into a little snowman and refuses to melt.

The recurrence of the Troubles in Northern Ireland in the 1970s has been in many people’s minds when the unhealthy intersection of poetry and politics has met – or collided – in Ireland itself with acts of war, a period of history covered by Frank Ormsby’s authoritative A Rage for Order (1992).

However, in the poetry, novels and non-fiction of John Hewitt, Benedict Kiely and Padraic Fiacc, Of War and War’s Alarms examines in some depth the Northern Troubles and beyond. Frank Ormsby’s book of poems, A Northern Spring (1986), substantially republished in his recent volume, Goat’s Milk: New and Selected Poems (2014), is devoted to the build-up of American troops stationed in Northern Ireland in 1943 and the preparation for the D-Day landings in 1944, while fellow northerner Tom Paulin published a fascinating multi-voiced collection, The Invasion Handbook (2002), which deals with the roots of the European world at war.

Along with poets such as Michael Longley, Seamus Heaney – in District and Circle (2006), as well as in earlier poems such as In Memoriam Francis Ledwidge from Field Work (1979) – and in Derek Mahon, retrospective echoes and memories of growing up during the war years, move out into the wider world by the early 1970s.

All these writers provide a sense of new beginnings from Ireland’s “local” war to the European and migrant experience of the present day, which critically represents a revision of our various histories into a more complex story we can finally all share.