The Führer and many other Nazis were addicted to meth, according to author Norman Ohler, and their inebriation and reckless decisions may have dragged on a war that could have been over in 1941 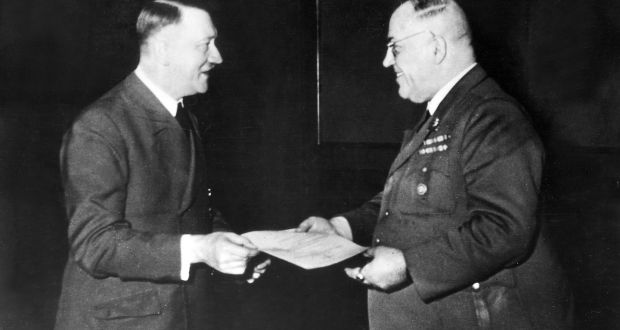 When the Nazis came to power in Germany, in 1933, Hitler’s goal was to sweep aside the petty concerns of realpolitik and replace them with a collective frenzy of intoxication – politics as mass ecstasy. Meanwhile, the literal intoxication of Weimar Germany, which gorged on cocaine and heroin, was condemned as morally degenerate. As Norman Ohler insists in his study of the role of drugs in Hitler’s Germany, the Nazis “hated drugs because they wanted to be like a drug themselves”.

Blitzed covers the 12 catastrophic years of National Socialist rule, from the prelude to war to the Götterdämmerung of Hitler’s Berlin bunker. There, rattled by years of drug use and the probable onset of withdrawal, Hitler hit nihilistic rock bottom by ordering the total destruction of Germany; when he shot himself in the head it was with a hand that shook so badly he feared for his ability to hit the target.

Alongside the Führer there are two key players in Ohler’s narrative, one human and one chemical. Dr Theodor Morell was Hitler’s personal physician until the bitter end, and we are advised that “anyone who wishes to approach Hitler should take a detour via Morell”. Ohler contends that Morell’s significance has been underestimated: the doctor’s prolonged administration of a cornucopia of drugs, notably a hard-core opiate called Eukodal in Germany (and called OxyContin, in a modern form, here), contributed greatly to Hitler’s physical decline, as well as his intensifying retreat into make-believe.

The other protagonist is a little white pill called Pervitin, a brand of methamphetamine patented in 1937. As Hitler whipped the nation into a fervour of ideological enthusiasm Pervitin became a phenomenon. Considered a panacea, it was gobbled by listless housewives, cramming students, doctors, manual workers and pretty much everyone else in Nazi Germany. When the time came for Hitler’s expansionist plans to be put into effect the armed forces adopted with gusto. That’s right: the Nazi war machine was fuelled by a version of crystal meth. Pepped up on the wonder drug that induced euphoria and dissolved fear, inhibition and tiredness, the Wehrmacht swarmed across Europe, achieving huge territorial victories before the Allied powers knew what hit them. In the invasion of Poland alone 35 million doses of Pervitin were consumed by German troops, who were commanded to push ahead for days on end without sleep. One medical historian reckons that “Blitzkrieg was guided by metamphetamine”.

What goes up must come down, and in Ohler’s reading early victories fuelled by the Pervitin rush instilled unreal expectations on both sides: neither Hitler nor the Allies realised it, but the Nazis had effectively lost the war as early as 1941.

As his megalomaniacal dreams shattered against the hard realities of Soviet might and the Allied fightback, Hitler scarcely allowed Morell to leave his side. Every hint of an ailment was met with demands for mood-boosting injections. Soon Hitler was perpetually wired on a bewildering array of uppers and downers – including cocaine, the drug denounced by Nazi ideology as a Jewish vice. Morell struggled to find an intact vein to hit in the addict Führer’s track-marked arms. Hitler developed a bad case of the shakes.

Decisions of world historical importance were made while Hitler was horsing more drugs than the Happy Mondays. As he withdraws into jaw-gurning fantasy Germany’s altered statesman cuts a comical, even touching figure: he “entertains” guests by impersonating machine-gun noises; delivers long, mumbled speeches to nobody at all; issues batshit decrees and enthuses over grandiose architectural plans as his Thousand Year Reich goes up in flames.

Elsewhere, the narcotised war played out like a long bad trip. Hallucinatory images abound: concentration-camp prisoners on a circular march through the night, blitzed on experimentally high doses of cocaine and heroin; doomed German youths wired on meth in tiny one-man submarines; a Nazi doctor at Dachau spiking prisoners with mescaline, then telling them that he has direct access to their souls.

Blitzed is the author’s first work of nonfiction. The novelty of his claims may have specialists asking whether Ohler has allowed the buzz of a good story to override a teetotal adhesion to the facts. Regardless, the abiding image of this engrossing book is a remarkable one: Europe being dragged through hell by a fanatic to whom sobriety had become as foreign as empathy.

Rob Doyle’s most recent book is This Is the Ritual, published by Bloomsbury