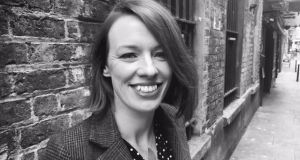 straight from the hay,

and stuck with down.

Gather and marvel at their nested

warmth. Against the curve

of a bowl, smash.

In a cupped hand allow

to sit in your palm.

The whites will trickle

the yolk will rest

heavy as the sun.

The glassy filament is infinite,

nothing is as vital as albumen.

Your keys are in the last place

that you left them. Wrap a scarf

around your neck, wear sensible shoes.

You must disappear for at least a week.

Walk paths that do not belong on maps.

Pick sorrel, bruising it with the nib of a tooth,

your tongue will grimace against it.

Cock your head back and drink the drip

of the waning moon, the burst of milk

across the plane. Steal ripe pears

from an orchard, open wide and bite.

Take care not to wash your chin

afterwards. Tongue it later at dusk

when it is too cold to breathe.

See how the night air warps its sweetness.

Catch a hare and blanket your nose

in its pelt. Cull, bury, exhume and repeat

the wanton flesh he brought to the soil.

Fill your pockets with sloe berries and wonder

how you found these, but have no gin.

It’s much too early to be thinking about a G&T.

Address your fears that your loot may curdle

the stomach and poison the blood.

Pick up a copy of the Guardian to guide you.

They’re running an article on foraging,

Return. The dust has settled

on the parquet floors, the reclaimed

kitchen counters and the upcycled

chairs that blistered your hands red.

Look at the dirt.

You have been caught slacking.

Time was unkind to your egg whites.

In the bowl, they will

look as you left them.

But they aged. Brittle now,

no longer the elastic

on the counter. Knock

the air out of them.

Wonder as they emerge

from the oven. Such pretty colours,

Resist. The urge to eat them.

when lighting her cigarette

a sheathed talon and crimson

Deirdre Daly is a writer living in Dublin. Her poetry has been published, or is forthcoming, in Crannóg, The Level Crossing, The Normal School, The Minnesota Review, WSQ and Room Magazine. Her fiction has been published in Word Riot, The Alarmist and various anthologies. She was runner-up in the 2016 Fish Publishing poetry competition.