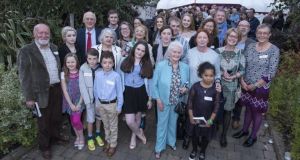 Rosita Boland (third from right) with some of the interviewees from ‘Generations: Ten Decades of Irish Life’ at the launch of the book. Photograph: Dave Meehan/The Irish Times

Personal testimony has become a crucial tool for analysing our history and our present, from the statements taken by the Bureau of Military History in the late 1940s to the accounts given to the Ryan commission by victims of child abuse in the last 20 years to enlightening current interviews with immigrants to Ireland and Irish emigrants to other countries. One personal story can be far more powerful than acres of analysis if it helps us to empathise with other lives than our own and walk a bit in someone else’s shoes.

Rosita Boland developed this book from a series of interviews she published in The Irish Times from April 2014 to June 2015. She wanted to cover 100 years in 50 interviews, five per decade, starting with people over 90 and finishing with people under 10. The interviewees were mostly self-selecting or nominated by family or friends. Some are famous, like TK Whitaker or Moya Doherty, but the vast majority are so-called ordinary people, and it is this that gives the collection its scope and depth.

The book partially achieves its aim of presenting a quasi-social history of Ireland over the past 100 years. Partially, because the published interviews are too short to give us a full picture of the interviewees (they are three-to-four pages long). Nonetheless, there is great fascination and instruction in looking at changing social attitudes, personal fates and varied opinions over such a long period.

The cohort in the 70-90 age group focus on education, religion, health, drink and, obviously, loss of family and friends. Many of them left school early (after primary school) and wanted better educational chances for their children. A minority of them are critical of the Catholic Church: Here’s author Dervla Murphy (82) on abortion: “I think it’s outrageous that you have a whole load of men making those decisions, in church and politics, especially a load of celibate men.” Many are critical of the drinking culture, such as Dan Gallagher (87): “I saw too many men absolutely foolish at wakes when I was a child.”

As the book moves through the generations, you see the transformation effected by access to secondary education and to third level, taken almost for granted by people in their 20s and 30s. Their complaint is that, having studied hard to acquire qualifications, there are now no jobs for them.

Noel Storey (57), a sound engineer who left school at 15, mourns the downgrading of the technical education sector and apprenticeships: “Not everyone is academic”.

Younger generations are more critical of the church, more likely to criticise the traditional family and very conscious of the pressures of the housing market. Brian MacIntyre (49) is eloquent on the difficulties of being gay and the judgmental attitudes when he was a child: “Irish society would have had me believe being gay was the worst thing that could have happened to me.” He is still, rightly, angry at being made to be “expert at managing the secret”.

Malone, on the other hand, bought an apartment in Sandyford in 2005 for €450,000, which is now in negative equity (“I never thought I wouldn’t be able to sell it.”) With two children, she cannot afford to stay at home, even though the idea appeals to her. Their creche fees amount to €2,000 per month. The choices these women can make are totally at the mercy of a dysfunctional housing situation and failure to invest in affordable and quality childcare.

Teenagers are worryingly concerned about mental health issues, but also more ready to talk about them than older people. They are also conscious that they can be inclined to prioritise relatively trivial things. Here’s Tommy Meskill (20): “If I break my phone, I’m in a bad mood for the rest of the day.” The under-10s are delightful, especially Eva Flaherty (8), who is devoted to her pet hamster, Ellie, and when she grows up wants to be “a dolphin trainer. Or design dresses. Or both.”

Boland remarks on the fact that the value most cherished by most of her interviewees is honesty, given our general levels of societal dishonesty. Perhaps absence makes the heart grow fonder. It’s worrying, however, that so few prioritise compassion or kindness as values they esteem.

Catriona Crowe is head of special projects at the National Archives