The author discusses his debut novel with Laura Slattery 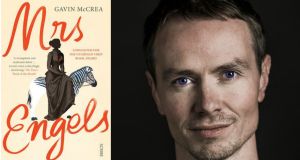 Gavin McCrea talks about his debut novel Mrs Engels, his 1870s-set story of Lizzie Burns, a poor worker from the Irish slums of Manchester, who like her sister Mary before her becomes the lover of Marxist theory co-founder Friedrich Engels.

McCrea discusses how the real-life Lizzie’s illiteracy contributed to her being written out of history, giving him, as a novelist, the opportunity to create a fictionalised Lizzie.

He talks about how he produced this compelling first-person voice, how it becomes a performance for him to write and how “it’s very hard for me to say what is me and what is her” in the book.

He also explores Lizzie’s manifesto for living, from the opening line of the novel - “No one understands men better than the women they don’t marry” – to her views on Irishness, the historical figures of Marx and Engels, and her own move up the social scale.