Fiction writers are real people too

Once authors are published, it is as if they have been ordained and are revered for their ‘otherness’ but they are ordinary people who have to shop and work and earn a living 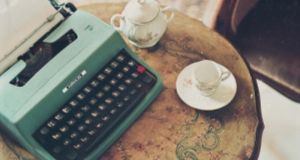 We don’t want to think of our authors as normal people who go shopping for their kids’ shoes in Dunnes Stores or having, like, a job

A recent interview with Irish author Donal Ryan, in which he revealed that he was returning to full-time employment, has challenged some long-held misconceptions about publishing and writers themselves. The comments section was full of your typical Irish begrudgery (although I’m sure they do begrudgery just as well elsewhere) but it was the sentiment behind them that struck me. While reading, I began to wonder if the root of people’s anger was not at the fact that he was returning to a “cushy number”, but that a talented, successful author could also be a civil servant?

Authors should be elusive, giving us no sense that they ever had a “regular” life before achieving (somewhat reluctantly) celebrity status. Seeing authors speak openly about their careers and mentioning that dirty word, money, doesn’t seem to fit with the air of mystique we normally like to associate with them. Even when an author changes genre, we think, what right have they to do that? Don’t they have enough as it is? There’s a sense of unfairness.

6 How did Ireland jump from low Covid base to world’s highest infection rate?

11 The most Irish thing ever? Ballyhaunis Three identified in quick time

13 This warm, spicy stew can be rustled up in 15 minutes

14 Five habits learned during the pandemic that we should keep

24 Luke O’Neill: Scientists have delivered against Covid-19. Now the politicians need to

26 David McWilliams: What a Doc Martens boot can teach us about the wealth gap

29 The only four skincare products you need

30 Q&A: Covid-19 new variants in Ireland - everything you need to know

31 Nazis and Nobles: The History of a Misalliance: Role of the nobility in Nazi Germany

32 Maureen Gaffney: The land of the mother and baby homes

33 ‘A very nice baby with beautiful fair skin ... It was like they were selling a doll’

35 Sean Moncrieff: If you run the numbers, all parents lie to their children

37 Brexit red tape: ‘If nothing changes, Ireland will be closed’

39 Anfield stalemate shows dire need to get the freshness back