Pound’s pro-Nazi radio rants landed him in deep trouble with US authorities after the war, as this third of a landmark three-volume biography describes 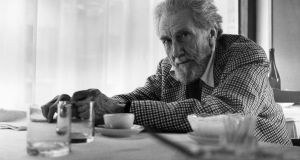 David Moody’s life of Ezra Pound is complete, and a splendid work it is. The final volume begins early in 1939, when Pound had the effrontery to think that he could take a trip from Italy to the United States and persuade president Franklin Roosevelt to keep America out of the war that was already looming in Europe.

Someone should have told Pound that presidents do not take advice from poets, especially not from American poets who prefer to live in Rapallo. The same friend could also have told him that choosing to live in Italy, write for Meridiano di Roma, earn a salary of sorts from the Italian Ministry of Popular Culture and, in return, give talks on Rome Radio after Italy had declared war on the US, talks in which he scolded American society and denounced Jews . . . well, that these would be counted back home as hostile acts.

And, indeed, they were so counted. On July 26th, 1943, the US justice department indicted Pound for treason. On May 3rd, 1945, he was arrested at his home in Sant’Ambrogio by local partisans. Released, he turned himself over to the American Counter Intelligence Center in Genoa, where he was interrogated by an FBI agent.

Transferred to a US prison camp in Pisa, Pound was placed in a maximum security roofed cage. After three weeks in solitary confinement, he suffered a mental breakdown and was transferred to an officer’s tent in the medical compound area. In November he was flown to Washington, and at his arraignment on November 27th his lawyer, Julien Cornell, entered a plea of not guilty and argued that he was mentally unfit to stand trial.

Four doctors agreed, describing Pound as “suffering from a paranoid state” and “mentally unfit for trial”. The judge accepted this judgment and ordered him to be lodged in St Elizabeth’s Hospital for the Criminally Insane in Washington until he was found fit to stand trial.

Gone for acquittal Moody calls Cornell’s defence a botch: he should have allowed the charge of treason to proceed and argued so strongly against it that he would have had Pound declared not guilty and released. Another view is possible: that Cornell decided that the crucial aim was to save Pound’s life by any means, rather than have him executed or sentenced to life imprisonment.

Pound believed that he was not guilty of treason: that what he said in his Rome broadcasts was protected by the first amendment to the US constitution, which protects free speech. He thought of himself as a teacher, instructing American society on the folly of its economic system, especially in relation to money and the banks. He did not urge American soldiers to desert.

Of course, he was not insane. On February 11th, 1948, Cornell filed a petition for habeas corpus. When it was rejected, he proposed to appeal. However, Dorothy, Pound’s wife, instructed him to withdraw the appeal. Nobody, not even Prof Moody, knows why. Dorothy may have grown tired of rejections.

Through all of this, Pound was as productive as ever. Between late June/early July and November 1945, he wrote the most accessible of the Cantos, Cantos 74-84, which were published as The Pisan Cantos in July 1948. In November, the fellows in American Literature of the Library of Congress awarded him the first annual Bollingen Prize of $10,000 for The Pisan Cantos.

When the award was announced in late February 1949, the fellows added a defensive note: “Pound’s works represent the highest achievement of American poetry in the year for which the award is made. The Fellows are aware that objections may be made. To permit other considerations than that of poetic achievement to sway the decision would destroy the significance of the award and would in principle deny the validity of that objective perception on which any civilized society must rest.”

Objections were indeed made. Congress decreed that the Library of Congress must not give any further awards.

After this unpleasantness, things settled down at St Elizabeth’s. Pound was free to receive visitors, and he enjoyed that freedom. Visitors found him not only sane but charming. Most were literary men, but one of his female visitors, painter Sheri Martinelli, took possession of him.

Moody concludes that “Pound was joyfully in love with her for a time” and that “loving La Martinelli transported Pound’s mind beyond the preoccupation with civic order which dominated his relations with the other disciples, and with his visitors in general, and into its paradise”. But Martinelli did not last, and she was displaced by another ardent muse, Marcella Spann, who might have lasted but didn’t.

See him rot Much of this book describes the attempts by several poets to have Pound released. Many Americans wanted to see him rot in St Elizabeth’s, and I suppose a few wanted to have him hanged, as William Joyce – “Lord Haw-Haw” – was hanged by the British. Some in government (“in its imperial pomp,” as Moody says) knew that it was bad public relations for America to be keeping Pound locked up, indefinitely, when Tokyo Rose and other enemy propagandists were already released.

On April 18th, 1958, Pound’s lawyer moved to have the treason indictment dismissed on the grounds that his client would never be fit for trial. Government supported the motion and the judge dismissed the indictment.

Pound sailed for Italy on June 30th and settled at Schloss Brunnenburg in the south Tyrol, home of his daughter Mary and her husband, Boris de Rachewiltz.

Not that that meant happy ever after. Pound had 14 years more to live (he died on November 1st, 1972), a wife, a mistress, and a muse to be harmonised, failing health to be dealt with, more Cantos or bits of them to be written, and travel to be undertaken to London, Dublin, New York and Greece.

For the final 10 years of his life, he lived with his mistress Olga Rudge, who often sounded as if she would never forgive him but in the end forgave.

Moody is also ready to forgive. He takes the poet’s part when he can. When he can’t, as in Pound’s anti-Semitic rants, he treats these as the working of a sick soul, a mind not insane but for these horrible moments astray.

It has been a difficult life to write, Pound being egotistical to a nearly impossible degree, but Moody has done it splendidly.

Denis Donoghue is a literary critic whose latest work is Metaphor