Derek Walcott, poet and Nobel laureate of Caribbean, dies at 87 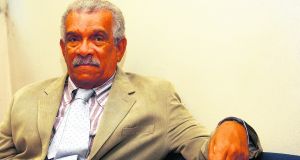 Derek Walcott, whose intricately metaphorical poetry captured the physical beauty of the Caribbean, the harsh legacy of colonialism and the complexities of living and writing in two cultural worlds, bringing him a Nobel Prize in literature, died early Friday morning at his home near Gros Islet in St Lucia. He was 87.

His death was confirmed by his publisher, Farrar, Straus and Giroux, which said the poet had been in poor health for some time.

Walcott’s expansive universe revolved around a tiny sun, the island of St Lucia. Its opulent vegetation, blinding white beaches and tangled multicultural heritage inspired, in its most famous literary son, an ambitious body of work that seemingly embraced every poetic form, from the short lyric to the epic.

His Caribbean reimagining of The Odyssey, 1990’s Omeros, secured him an international reputation, which gained him the Nobel prize in 1992. He also directed and wrote more than 80 plays.

With the publication of the collection In a Green Night in 1962, critics and poets, Robert Lowell among them, leapt to recognise a powerful new voice in Caribbean literature and to praise the sheer musicality of Walcott’s verse, the immediacy of its visual images, its profound sense of place.

He had first attracted attention on St Lucia with a book of poems that he published himself as a teenager.

Walcott’s ancestry wove together the major strands of Caribbean history, an inheritance he described famously in a poem from 1980’s The Star-Apple Kingdom as having “Dutch, nigger, and English in me, / and either I’m nobody, or I’m a / nation”.

Both of his grandmothers were said to have been descended from slaves, but his father, who died when Walcott was only a year old, was a painter, and his mother the headmistress of a methodist school - enough to ensure that Walcott received what he called in the same poem a “sound colonial education”.

He told the Economist in 1990: “The sea is always present. It’s always visible. All the roads lead to it. I consider the sound of the sea to be part of my body. And if you say in patois, ‘The boats are coming back,’ the beat of that line, its metrical pace, has to do with the sound and rhythm of the sea itself.”

There was nothing shy about Walcott’s poetic voice. It demanded to be heard, in all its sensuous immediacy and historical complexity. “I come from a place that likes grandeur; it likes large gestures; it is not inhibited by flourish; it is a rhetorical society; it is a society of physical performance; it is a society of style,” he told the Paris Review in 1985.

“I grew up in a place in which if you learned poetry, you shouted it out. Boys would scream it out and perform it and do it and flourish it. If you wanted to approximate that thunder or that power of speech, it couldn’t be done by a little modest voice in which you muttered something to someone else.” – (New York Times Service; Guardian Service)

Michael Harding: ‘Do I know anything? Very f**king little’