In the second of a series of excerpts from Handbook of the Irish Revival: An Anthology of Irish Cultural and Political Writings 1891-1922, Constance Markievicz asks who will start a fund to start a club for prostitutes in Dublin 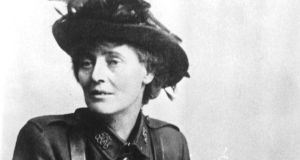 Prostitution was common in the streets of Revival Dublin. Many young women, known among the sympathetic poor as “unfortunate girls”, could find no other work. With marriage out of the question for many poor men, and conventional sexual activity policed by the Catholic Church, there was a thriving red-light district in the area called Monto (from Montgomery Street to Gloucester Diamond) and also near the Coombe. After independence, a concerted effort was made by the Free State government and the Legion of Mary (a Catholic lay apostolate) to close the whorehouses and find a better life for the women.

There was a widespread belief, echoed in this essay by Markiewicz, that the soldiers of the British army had kept some brothels in business. Sean O’Casey, however, caused a riot with The Plough and the Stars (1926) by featuring a prostitute in a pub alongside the flag and soldiers of the Citizen Army.

“There are no prostitutes in Dublin,” shouted one protester, only to be told by O’Casey “I was accosted by one last night.”

“Well,” came the reply, “there were none until the British soldiers brought them over.” Markiewicz’s account of her patrol suggests that socialist republicans always admitted their existence and were anxious to address the underlying poverty which usually lay behind it.

On a glorious morning like this, with the sun shining so brightly, and, apparently, everything around one in such a peaceful condition, one can hardly realise the horrors and disgrace in which one found the city of Dublin last night. Where are most of those poor creatures, men and women, who loitered around the neighbourhood of Sackville Street and along the quays?

Some of the men we know are in barracks, others scattered throughout the city. As to the other half of the community ‑ our sisters ‑ many of them are in that filthy -- Street. Street is a very dignified name for a place that is more like a ditch with ruins on one side of it. In this awful street one can hire a “furnished” room for 6d. a night. I think few Dubliners know that this locality (Coombe district) is so bad. One should see it to realise all its horrors. Here one can pick up vermin as easily as one can get one’s boots muddy on a rainy day, and this is where many of our girls go back to in the early hours of the morning, and sleep well on into the day, till their horrid trade begins again.

Many of the inhabitants of this street did not begin life in this way. Some of them were domestic servants, and in various other callings of life, and from many causes they sank to this degradation. We, who have not been put in the way of this particular temptation, ought to make strenuous efforts to see that the conditions in Dublin shall in every way be improved, and that our young girls shall not have the chance of being thrown in such awful depravity. We have no right to blame them.

Some of our girls in paper factories are earning 4s. 10d. a week, their hours being from 8 to 6, with one hour for dinner. The whole mode of life and upbringing of the less privileged classes is too horrible. We give them low wages, and provide very bad living accommodation at high rents, with no relief from work or any simple kind of entertainment for them. One hears a small talk of starting clubs, but one of the great difficulties is the lack of funds. A large club with plenty of room should immediately be opened in the heart of the city, where the girls and men can amuse themselves and meet in decent surroundings.

Of course, it would be impossible to bring into the club the girl who has already fallen a victim to the streets. Something else must be done for her. We have no right to shirk this duty: we must face at once the problem of our streets at night, and face it squarely. Just now it is easy enough to get women volunteer workers, who are dying to make munitions, wait on the wounded soldiers, drive motors, etc. Why should not some of them come forward to help cure this open sore that has been in their midst all their lives? Now is the time, while public interest is being roused.

Working among factory girls is really very interesting, and one gets back plenty of reward for any little inconvenience one may be put to. The girls respond so quickly to any little sympathy and kindness, and the more one sees of them the better one loves them. Who will start a fund to collect money for a club for our girls and men?

Handbook of the Irish Revival: An Anthology of Irish Cultural and Political Writings 1891-1922 is edited by Declan Kiberd and PJ Mathews and published by Abbey Theatre Press (€18.90)