Love, family lies and jail: lots for teenagers to get their teeth into 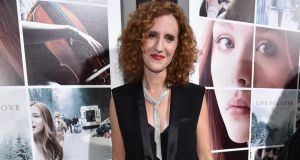 Gayle Forman: the If I Stay author contributes to a new US anthology. Photograph: Alberto E Rodriguez/Getty Images

The first children’s and young-adult novels of 2015 are already occupying space in the nation’s bookshops, many of them providing excellent excuses for exchanging those Christmas book tokens. The young-adult reader seems to be particularly well catered for. There are books here certain to entertain, stimulate and provoke a teenage audience. By coincidence, all four young-adult titles in today’s column are set in the contemporary United States, but they deal with adolescent themes that easily move across geographical boundaries.

Subtitled Twelve Winter Romances, My True Love Gave to Me, edited by Stephanie Perkins (Macmillan, £10.99), is an anthology of short stories by a selection of the United States’ best known young-adult writers, including Holly Black, Gayle Forman and David Levithan. With its pages edged in pink, its gold-ribbon bookmark and its pretty blue cover, the book might at first glance seem to be highlighting the cheesiness of its “romances”, which is certainly true in some cases. But this is not the whole story.

There are enough edgy and quirky moments, enough bitter-sweet echoes, enough volatility of mood, to offset the occasional predictable situation or stereotypical characterisation. Contemporary realism is more successfully handled than the magical variety. Straightforward linear narrative is clearly preferred over more experimental forms, although the opening story, Rainbow Rowell’s Midnight, which cleverly plays with time’s passing over a period of four years, is an interesting exception. The inevitable expressions of adolescent angst are neatly balanced by flashes of inventive wit and humour.

While there are a few moments of “wit and humour” in Steve Watkins’s Juvie (Walker Books, £6.99), no one could claim that they are typical of the book as a whole. This is hardly surprising perhaps, given that much of the novel is set in a juvenile detention centre, where 17-year-old Sadie has been sentenced to six months’ imprisonment for “confessing” her alleged involvement in a drugs crime she did not commit.

The guilty party was her wayward older sister Carla, whose record of anti-social behaviour is already well established. It is to safeguard Carla from further entanglement with the law that Sadie sacrifices her freedom.

Narrated by Sadie in chapters that alternate between harrowing descriptions of her institutional experiences and accounts of her (and her family’s) earlier histories, the novel becomes an engrossing study of guilt and innocence. “There’s a difference between being not guilty and being innocent,” she comes to realise, a distinction that summarises the novel’s central theme. When we leave her, half of her sentence still to serve, we leave a young woman whose altruism has been demeaned and degraded by what she calls “the deadening quality” of life behind bars. We also leave a young woman whose ability to forge relationships – with her mother, her reclusive father, her boyfriend, her three-year-old niece and, of course, her sister – has been severely tested.

From the Virginia of Watkins we move, in Nick Lake’s There Will Be Lies (Bloomsbury, £12.99), to Arizona and a landscape dominated by the Grand Canyon. Here we encounter another 17-year-old, Shelby Jane Cooper, who is portrayed as moving between the real world she shares with a possessive mother and the parallel domain known as “the Dreaming”, populated by archetypal characters drawn from Native American myth.

“There is something seriously messed up happening and I want to know what it is,” says Shelby at one point, foreshadowing what might well be the reaction of readers as they follow mother and daughter on their Thelma & Louise-style jaunt into territory where the dividing line between truthtelling and lying becomes ever less certain. The journey brings its eye-opening discoveries and revelations, but their mythological underpinning diminishes rather than enhances their impact.

And so, finally, to the suburb of Cedar Hill, described initially as “a little pocket on the outskirts of Chicago, where everybody knows everybody else’s business, where nobody forgives and nobody forgets”. This is the setting for Catherine Doyle’s impressive and ambitious debut novel, Vendetta (Chicken House, £7.99). It will eventually have its own “strange underworld, where morals were warped beyond reason”.

As 16-year-old Sophie Gracewell and her mother soon discover after their arrival here, their new environment is dark and dangerous, made all the more so once their lives become embroiled with those of a neighbouring family of Sicilian origin. It seems, as Sophie breathlessly notes in her garrulous first-person style, that it is a family comprising five extremely handsome – “hot” – young brothers. Nico, in particular, casts a strong spell.

Doyle skilfully prepares her readers for a narrative that blends thriller and romance, building tension in the former and accelerating the physical intensity of the latter.

What emerges ultimately is a tale of two interlinking families, their misdemeanours, their secrets and lies and, above all, their conflicting loyalties and urge for revenge: the Montagues and the Capulets come to mind. The plot’s numerous twists and turns are sometimes predictable, sometimes unexpected, but, in general, this is a novel that will keep its readers turning the pages. Irish young-adult literature has, in the person of Doyle, a welcome addition to its ranks.