Baileys winner Eimear McBride puts it up to publishers 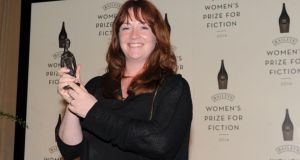 Eimear McBride celebrates winning the 2014 Baileys Women’s Prize for Fiction: “Pulling the skin of English over the bones of Irish, with all the resultant linguistic wonders and peculiarities, is what we do best. So any diminishment of our complex and singular approach to language strikes at the very soul of Irishness itself.” Photograph: Stuart C Wilson/Getty Images

The tome that the publishers rejected has just become the cornerstone of pretty much every major literary prize going, and Eimear McBride, who last night won the £30,000 Baileys Women’s Prize for Fiction, is still getting used to the notion that publishers will soon be sending her begging letters, not rejection slips.

“I’m still amazed that’s it’s happened,” said McBride, whose debut novel, A Girl is a Half-formed Thing, was written in 2004 but dismissed by the industry as too difficult and unmarketable and published only last year by Galley Beggar Press, a tiny publisher in her adopted home city, Norwich.

Since then, it has won the £10,000 Goldsmiths Prize and the €15,000 Kerry Group Irish Novel of the Year, as well as being shortlisted for the Folio Prize and the Desmond Elliott Prize, but beating Donna Tartt, Jhumpa Lahiri, Chimamanda Ngozi Adichie, Hannah Kent and fellow Irish author Audrey Magee to win the Baileys is the cream of the crop.

Asked on RTÉ’s Morning Ireland what her string of successes said about the publishing industry, McBride said: “Unfortunately it speaks to a great deal of cynicism in the publishing world. I got a lot of rejection letters back, all very positive, saying that while they admired the book and the writing, it didn’t fit into a comfortable marketing niche and they weren’t prepapred to take a risk on it, I think that is a very unfortunate and dangerous situation for publishing to be in. I hope the book’s success will encourage publishers to be more adventurous, to get back to the heart of what they’re doing, which should be publishing challenging and interesting work.”

This echoes what she said in an interview with Sinead Gleeson in The Irish Times last October: “It shouldn’t just fall to independent presses – large publishing houses should siphon off some of their vast wealth to champion experimental fiction.”

The novel is about family, death, sex and emigration, classic Irish themes but freshly minted here. The unnamed central character’s brother is terminally ill, which is painfully poignant as McBride’s brother died in similar circumstances at 28. This, she said, was the hardest thing about writing the book.

“I really didn’t want to write about this, but in some ways it was cathartic. A year after my brother died, I went to Russia for two months because I wanted to be alone. I was in St Petersburg, with the white nights of summer and no darkness. I had insomnia for months so I wandered around, looking at everything. Then it hit me that I wanted to work towards writing.”

Gleeson’s review that same month was full of praise and has proven prophetic: “Reading McBride is to summon up the ghost of Molly Bloom’s mantra-like soliloquy, as well as her longing and desires. There are distant echoes of the childhood voice of Roddy Doyle’s Paddy Clarke, but comparisons don’t quite capture what this book has achieved. McBride’s themes and language prove her to be fearless, and her voice is utterly compelling and unique. Hers is a name we’ll be hearing a lot about in the future.”

McBride, who was born in Liverpool to Irish parents and grew up in Sligo and Mayo, before studying drama in London, is by now used to fielding questions about her work’s challenging nature: “It looks different on the page when you open it but it’s really quite accessible once you get used to the style and find the rhythm of the writing itself, most people say they forget about what initially seemed difficult.”

What kept her going, she told RTÉ, is that she believed in the book as a thing of value in itself, even without a publisher, and held on to the hope that “at some point someone would see the value in it too. Every writer wants to see their book have a life of its own. Certainly winning the Baileys prize and winning the Kerry prize the week before gives the book a much wider reach. It’s a really wonderful thing for me to see that.”

Faber released a paperback edition of A Girl is a Half-formed Thing in April but Sam Jordison, McBride’s original publisher at Galley Beggar, confirmed that there is no deal on the next book yet. “When she finishes it, I imagine she’ll be putting it up for auction and every single publisher in the UK and Ireland will be bidding. We all await it with eagerness. I can’t wait to see it, and the one person I know who has read it (William Galinsky, her husband) says it’s incredible but beyond that I can’t tell you any more.”

Another of her stories, however, is published today by Tramp Press, Ivy Day in the Committee Room. If that sounds familiar, it should, as it is a reworking of the James Joyce short story, part of Dubliners 100, a reimagining by contemporary writers of Joyce’s classic collection to mark the centenary of its publication.

On Monday, July 21st, as part of The Irish Times’s How to Write a Book series, McBride will address the use of language in fiction. Here is just a flavour of what she has to say:

“All stories have already been told, the manner of that telling becomes vital and the greatest opportunity for the writer to bring what is singular about their talent, to the work.”

“Being specific with language is the author’s duty, and pleasure, for it is only by its careful application that they may draw their reader into – or alienate them entirely from – any story they wish to tell.”

“After all, pulling the skin of English over the bones of Irish, with all the resultant linguistic wonders and peculiarities, is what we do best. So any diminishment of our complex and singular approach to language strikes at the very soul of Irishness itself.”