Aria, an exile’s love song to the people of Iran 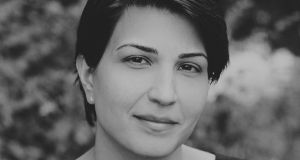 As a child in the 1980s almost everything I saw on TV about Iran was wrong. The footage only presented one type of person, often stereotypical. The images on the screen were, themselves, often several years old.

When I used to sit in my Canadian home and watch the Canadian and American news glorify supporters of Khomeini, repeatedly presenting them as the face of Iran, I would cry myself to sleep wondering why the news never showed people like me, those who weren’t driven by religious dogma.

It would get worse the next day at school when other children asked why I did not wear a hijab and why, if I loved Khomeini so much, I was living in Canada. To them, all I could be was a raging lunatic shouting at a camera.

I was born in Tehran just before the revolution. From what I’ve been told by my family the first year or so after Khomeini’s return, despite his slaughter of all of the Shah’s generals (except the few fortunate ones who escaped) and most of his close staff, the country was relatively stable and the oppression that characterised the Shah’s regime seemed to be in the past.

Then, Khomeini and his closest associates panicked and his paranoia set in. This is when his killing spree began. It was about 1980-’81, and it coincided with my earliest memories beginning to form. I hadn’t been born early enough to remember the good. All I remembered of Iran was the terror and fear and talk of Khomeini’s orders to kill people.

This brutality continued well after my family and I had left Iran. It was taken up by his successor Ali Khamenei. As these dictators continued with their iron grip on Iranians, the people were left with no choice but to become political. And, when lives are destroyed so brutally, politics becomes black and white.

This stark choice was only further reinforced by the response of western governments and the media, barring a few outliers. An attempt to understand the causes at the root of the upheavals in Iranian society were ignored for the more sensational stories. Not only would western readers fall for this black and white world, so would the Iranians, myself included.

And so it went on for 40 years, and again only two months ago. Donald Trump’s assassination of the Iranian general Ghassem Soleimani, rather than undermine the power of extremist forces in the region, actually served as a horrific catalyst for the chain of events that would lead to the downing of a passenger plane and the tightening of the regime’s stranglehold on the roughly 90 per cent of the Iranian population that does not support it.

Trump’s interference led to the deaths of over 200 innocent people and left a nation broken all over again. And it did something even more sinister. His act further divided a nation psychologically and spiritually. It painted a people as either good or bad.

Soleimani was a violent man with blood on his hands and was a war criminal, but many rational, intelligent Iranians also credit him with protecting the country from the threats of Isis and other foreign terrorist organisations such as al-Nusra and al-Qaeda.

Many Iranians can hold both these thoughts in their heads at the same time. And many of these people who share this view of Soleimani also stand vehemently against the Iranian regime. But their support for Soleimani was unforgivable to those Iranians who could not forget about Soleimani’s many war crimes. So while hashtags about WWIII were gaining popularity on social media, within Iran itself fissures were growing between the anti-regime movements. Trump’s action had, effectively, driven a wedge between millions of people within the opposition.

Iran’s story is one of many such interferences from the outside world. When I was in my early 30s, about two or three years after I had started writing my first novel, Aria, I began to see this with renewed clarity. I had wanted to write this novel since I was a child in Iran. It was, as I thought when I was only five or six years old, my only way of revealing to the rest of the world what was really going on in my country of birth.

I wanted to use the novel as a way to speak for the voiceless. But somehow, through the process of writing the book, I began to wonder if things were the way I had always thought them to be. I had written unlikeable characters that did awful things. Yet, creating them I slowly began to empathize with their circumstances, to care about the minutiae of their daily lives, whether they ate well or had well-paid jobs. I cared about whether they were belittled for being poor or uneducated, and if this belittlement caused them to do desperate things.

I began to understand that some of the books that I thought were revelations about “true” Iranian society were not that at all. The bias I saw in these books was like the bias I used to see in the 1980 news footage of Iran. Unlike what many of these books claimed, not all Iranians were highly educated, sophisticated, secular, wealthy and modern. Many in fact were the opposite. Many were poor and destitute, and, as a result, uneducated, and religious and dogmatic and traditional and yes, angry with the West.

Throughout the 20th century the West, a world so very far away from them in one way, had interfered with their lives, turning citizen against citizen, friend against friend, father against daughter. And two months ago it happened all over again.

Writing Aria taught me how the more governments and the media try to paint the world with one brush, the more you have to believe there are millions, if not billions of hidden tones within the bristles. I titled my novel Aria because the word itself translates into “the Iranian people”. In this novel there is room for the woman who faithfully wears her black chador, as well as the one who can’t wait to burn her hijab and go on holiday to New York. There is room for the sophisticated modern Persian, as well as the angry religious individual who loved Soleimani.
Aria by Nazanine Hozar is published by Viking, £14.99