Booker prizewinner was ‘unanimous choice’ of the international panel for the €50,000 per year position 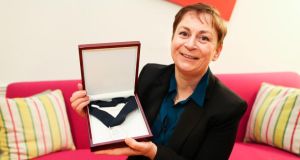 Anne Enright has been named the inaugural Laureate for Irish Fiction. She was awarded the honour by the Arts Council at a ceremony in Dublin and will begin her three-year term this month.

Anne Enright has been named the inaugural Laureate for Irish Fiction.

The role lasts for three years, and is a new initiative that has been developed by the Arts Council, with support from UCD, New York University and The Irish Times. As part of the role, Enright will teach one semester at each of the partner universities, deliver an annual lecture, and engage in a number of public events. The wider responsibilities are to promote and encourage a greater engagement with Irish literature and, specifically, with reading.

Taoiseach Enda Kenny made the announcement at a ceremony at the Arts Council and, speaking at the event, he said: “The Laureate for Irish Fiction is awarded on the basis of literary accomplishment and excellence, and is the highest honour that the Irish State can bestow on a writer in this genre. Anne Enright’s eloquent and powerful writing, fiercely individual voice and unyielding commitment to her craft combined to make her the pre-eminent choice.”

During her laureateship, Enright will have a particular focus on nurturing the short story form at home and on the translation of Irish work into other languages for publication abroad. The laureate will receive €50,000 per annum from the Arts Council for their work.

“Writing is an increasingly fragile eco system. The internet is like global warming for the thin end of the business, and for Irish writers, getting work in translation has been key in keeping you going,” said Enright. “It’s a part of our profile that is slightly hidden. We think of the Booker and of the New York Times bestseller lists”, she said, “but having a good profile in Germany, France, and China” can be just as important.

On the role itself, she said: “It’s there to be made. The Arts Council and the committee (see it) as a sharpening of the kind of work that Irish writers are already engaged in, because you do an amount of cultivating the tradition one way or another.

Enright is clearly enthused by the project. “There are some new writers that are very exciting and good fun at the minute. Earlier in the year there was a weekend in Oslo, and there was a whole gang of Irish writers . . . And you could see these people with their next book in their minds. There was that feeling of things mattering, of personalities developing, and of the tradition being very much alive. Tradition is made out of biography and gossip. There was plenty of potential biography at two in the morning in Oslo.”

The Laureate for Irish Fiction was selected following a public call for nominations over the summer. This longlist was cut down to a shortlist, and an international panel then selected her as Ireland’s first Laureate for Fiction. The committee was chaired by the poet Paul Muldoon, and included Dublin Impac Literary Award winner Juan Gabriel Vasquez; poet Paula Meehan, New Yorker fiction editor Deborah Treisman, novelist, poet and biographer Blake Morrison and Siobhán Parkinson, Ireland’s first Laureate na nÓg.

Enright was the “unanimous choice” for the panel, according to Paul Muldoon. “Incisive, insightful, intellectually rapacious, and emotionally rapt, Anne Enright has for almost 25 years helped the Irish make sense of their lives, from the nursery to the national debt. Through her varied and far-reaching fiction, she has also helped the rest of the world make sense of Irish life. In addition to being a consummate artist, Enright will bring a clear and radiant energy to her role.”

Speaking immediately after the Taoiseach’s announcement, Enright added: “The laureateship is not about one writer, but about a series of writers stretching into the future who will each play a briefly emblematic role in Irish letters. It is a great honour to be chosen. I hope I can rise to the role, and maybe have some fun along the way. I take courage, as ever, from the readers I have met - especially in Ireland, but also abroad - who allow fiction do its deeply personal work; who let Irish writers into their minds and hearts, and welcome them as their own.”

Enright was born in Dublin in 1962. After a career in television production, she took up writing full time in 1991. Her short stories have appeared in the New Yorker, Granta and The Paris Review; she won the Davy Byrnes Irish Writing Award in 2004; her first collection, The Portable Virgin, won the Rooney Prize for Irish Literature in 1991; and her novel The Gathering won the Man Booker prize for Fiction in 2007 and the Irish Novel of the Year. Her next novel, The Green Road, will be published in May 2015.

This weekend, Enright will have her first public duties as laureate. She will give a public interview with broadcaster Vincent Woods at Longford Public Library on Saturday, January 31st, and a reading at Charlie Byrne’s Bookshop in Galway on Sunday, February 1st.