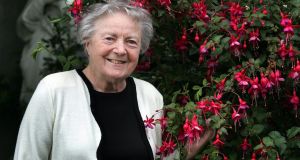 A lost manuscript, discovered in a sealed package in 2013, has been published by Arlen House as Ambassador Extraordinaire Life of Daniel O’Daly 1595-1662. The author, Margaret MacCurtain, now in her 88th year, overcame her initial reluctance to publish it, and reworked the manuscript with the same tenacity and determination which has marked out her life’s work.

It takes time and considerable ability to take disparate sources and create a finished work. For a biographer reliant on their sources for reconstruction a life story, finding surviving written documents to draw a complete rounded individual is not always possible. The achievement of writing a fully formed protagonist while placing them in wider historical narrative cannot be underestimated, particularly at the remove of 300 years.

This story was formulated between 1956 and 1963, its creation involved a detective trail across six countries, Ireland, Portugal, Italy, Spain, France and England, delving in obscure repositories in castles, convents, libraries, universities, the archives of towns and villages, stately homes and even the Pope’s private archive. Deciphering documents in five languages, dating back hundreds of years, requires not only extensive historical knowledge of the history of various countries over several decades but the skill of a linguist, who can read early forms of Irish, Latin, Spanish, French, Italian and Portuguese, as well as Tudor and Stuart English, and if that was not trying enough, the documents were in cursive script. In 1962, Margaret MacCurtain described her work as an “experiment in reconstruction”, what it demonstrates is originality in methodology that the author would use so effectively in her later works.

The voice of the young historian emerges, revelling in her discoveries

While it is a rigorous academic investigation, it is written with a fluidity that makes it accessible to the general reader. The voice of the young historian emerges, revelling in her discoveries, as she brings us to the interiors and sunny courtyards of continental Europe to the courts of royalty where her pen pictures are drawn from the paintings of long ago or from the lengthy despatches to Kings and Popes. Her skill of description brings forth the people and places of the 1600s. The empathic portrayal of young princesses given over in marriage as a commodity to be traded, enabled by machinations of ambassadors of yesteryear. She brings the reader to an understanding to her subject, who she describes as possessing “that inscrutable suavity which is the mark of the successful Kerryman”. By managing to decipher much of his complex diplomacy, he comes alive to the reader by her affection for her subject. She wryly describes one of his letters simply “as a little masterpiece of inconclusiveness”.

Author and subject shared connections, firstly with Co Kerry, Daniel by birth and upbringing, and Margaret, although she was born in Cork in 1929, grew up in Tralee. They both belonged to the Dominican Order, before she embarked on this subject, Margaret MacCurtain had become a Dominican Nun, her name in religion Sister Benvenuta or as she was known to many, Sister Ben. Her knowledge of canon law, the rules of her order and crucially the sources for her study was invaluable. It was fitting that an Irish nun would be searching the archives of the Bom Sucesso, the convent in Lisbon that Daniel O’Daly founded for Irish born nuns without dowries. I am sure that those nuns, preservers of his records, would have approved that she would go on to become not only an activist for women but would lead and sustain Irish women’s historical studies in Ireland for the next half a century.

MacCurtain manages to bring the reader to the closing years of the 1500s in Munster where Daniel O’Daly was born and spent his boyhood. Born into “a landed people” in Co Kerry, a member of the bardic order which produced generations of poets, lawyers and historians, Daniel O’Daly lived in Elizabethan Kerry a time when lands were lost in rebellion and 400 years of clan rule was ending and Behon law disappearing. While his brother Denis chose to join the military, no less dangerous was Daniel’s decision become a Friar in Counter-Reformation Ireland.

By contrast Daniel O’Daly (who became better known as Dominic of the Rosary), lived his adult life in the first half of the 1600s in Europe, moving with ease with royalty in several European courts, his diplomatic skills shaping and changing the course of history of several countries. A trusted Confessor, this Irish Friar was described by a contemporary as “a most capable and intelligent man” who gained the confidence of Kings and Queens and continued to hold it until his death. Spiritual Director as well as advisor on domestic and state matters, MacCurtain describes how this was possible because he was talented and cultured,”‘with generations of Irish tradition behind him”. She describes how Daniel O’Daly “acquired a European outlook which made his personality a blend of idealist and Machiavellist”.

He was a theologian in the Irish college in Louvain “without influence and a stranger” when his superiors sent him to Spain in 1662 to get aid from the Spanish King. From there the “very tall, black man” who “speaks very big” was to be the beginnings of a career in diplomacy. Later, Daniel O’Daly would be in Portugal when it was rapidly assuming a position of political influence. He helped to maintain Portugal as an independent country. He was key to the alliance between England and Portugal, when after the death of Oliver Cromwell, in the Stuart Restoration, Charles II married the Portuguese princess Catherine de Braganca (Fr O’Daly declined her requested to be chaplain to her suite).

As well as a convent, he established an Irish college, Corpo Santo, and met and worked with the most powerful people of his day – he is remembered as Ireland’s first modern Ambassador. His career involves him in political events in Europe when, as MacCurtain describes, “the connection between Ireland and the continent was considerable and subtle”. When required he raised an army in Ireland.

Those fortunate enough to have her tutelage will treasure this book

This is the man who from the time he was in his teens had risked his life to be friar preacher living as a fugitive in secret when friars were deprived of their monasteries by civil law. It is fitting that he managed to save his own family from persecution. In 1662, the year of his death, “provision was made for seven O’Dalys of Kilsarkan, fugitives of Cromwellian persecution in Ireland”, in O’Daly’s adopted home. By then, Fr Daniel O’Daly was Bishop-elect of Coimbra, one of the most influential sees in Portugal. By his appointment as Bishop, his relatives were automatically accepted into the ranks of the hereditary nobility of Portugal.

The author had been stoic in the loss of her work. Her own copy had been sent to a publisher and considered for publication but as she herself describes “life had moved on when he returned with an offer three years later” and so nothing came of his overtures, sometime later this copy of the manuscript was lost. The three other copies made when it was completed were sent to external and internal examiners, which resulted in the awarding of a Doctorate, which allowed for Dr Margaret MacCurtain to teach, mentor and educate several generations of scholars (myself included). Those fortunate enough to have her tutelage will treasure this book; for those who will come to her work for the first time, whether you know you history of Ireland and Europe in past centuries or not, you will enjoy her telling of the life story of Daniel O’Daly, as it reveals much of the skills of politics, diplomacy and leadership ambitions, which remain unchanged across the ages.