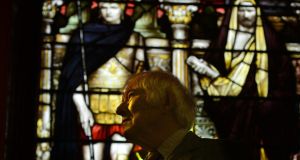 Seamus Heaney was always a generous venerator of his literary predecessors and guides. For much of his career the most dominant of these predecessor works was Book VI of Virgil’s Aeneid, particularly after he began his visionary volume Seeing Things in 1991 with The Golden Bough, translating the passage early in the book when the Cumaean Sybil tells Aeneas how he can find the token that will give him passage to the afterlife, where he will meet his father, Anchises.

Heaney occasionally let fall his wish to translate the whole of Book VI, but with his death, in 2013, the possibility seemed to have gone. But now, wonderfully, his daughter, Catherine, and Matthew Hollis at Faber and Faber have overseen his full version, a miraculous return from the literary afterlife and a brilliant capstone to the imposing edifice of his writing.

One of the most important poems in Heaney’s last, affecting volume, Human Chain, was the sequence Route 110, named after the bus between Belfast and “Cookstown via Toome and Magherafelt”.

The sequence was made up of 12 of the 12-line poems that Heaney specialised in after their invention in Seeing Things, often using the form for his most personal poems. Route 110 begins by describing how Heaney as a teenage student bought a used copy of Book VI of The Aeneid, and the sequence is full of allusions to Virgil’s poem: the shopkeeper is the Sybil who hands over the book as Virgil’s Sybil instructs Aeneas; the pet shop in the second poem is “silent now as birdless Lake Avernus”, recalling one of Virgil’s most familiar images. The boy hurries past the booths of Smithfield Market, past the suits and overcoats that swayed on their hangers “like their owners’ shades close-packed on Charon’s barge”.

The empty clothes recall the souls jostling for a place on Charon’s boat to cross the river of the dead, but they also recall Heaney’s father’s suits hanging in the wardrobe after his death, “broad / And short / And slightly bandy-sleeved” (The Butts). When the bus routes are announced, the inspector, performing Charon’s role, “separated and directed everybody” and the passengers “scattered as instructed”, flocking to the kerbs “like agitated rooks / Around a rookery” – a Virgilian simile now translated in Heaney’s version of the full book as “flocks of birds / Blown inward from the stormy ocean”.

The fourth poem in Route 110 remembers the poet’s wedding suit, “grey / As Venus’s doves”, which directed Aeneas and reassured him of the success of his quest.

In the next poem Mrs McNicholl’s oat candle leads the poet as surely as the goddess’s doves. The sixth poem is a funeral without a body after a drowning, evoking Aeneas’s drowned steersman Palinurus: the poet here is directed home by the bereaved mother to “absolve him formally of trespass”, as the golden bough licensed Aeneas to visit the underworld.

It is a pleasing irony that Heaney’s full version of Book VI of The Aeneid can now be read as a kind of commentary on and clarification of earlier Heaney borrowings and allusions. His concern – it could almost be called a fixation – with the book goes back much farther than Human Chain. Seeing Things, the volume in which Heaney at “nearly fifty” declared himself ready “to credit marvels”, is bookended by The Golden Bough and The Crossing, a translation of the Charon passage from “Inferno, Canto 3” in Dante’s Divine Comedy, another work derived from Book VI of The Aeneid that has been hugely important for Heaney.

Now, though, in the full version of Book VI Heaney is doing something that is formally highly original. It is important to understand this formal difference between the way Heaney translates Virgil in the whole book and how he rendered passages in earlier poems. In Seeing Things, The Golden Bough says at its head “Aeneid, Book vi, lines 98-148”, and that is what it is, line for line from the original, against which it can be compared. There Heaney used a long English line, to represent the 14 syllables of Virgil’s hexameters. Now he has recast the whole into the loose pentameters and hendecasyllabics – 11-syllable lines – of post-Shakespearean English blank verse. The effect is magical (although, of course, it makes it impossible to provide a parallel-text version: Heaney’s English version runs to 1,222 lines, as against the Latin original’s 901).

In his early poetry Heaney was sometimes credited with bringing effects from Irish usage, both vernacular and metrical, into English poetry, challenging the reality that “Ulster was British, but with no rights on / The English lyric”. Here he is now, naturalising Virgil’s hexameters into English decasyllables.

A long time ago Heaney said to Dennis O’Driscoll that he was drawn to Buile Suibhne, the medieval Irish story of the Ulster poet who falls foul of a cleric, by the thought that “there was something here for me”. We can see too what the attraction was for Heaney in the classical works he was drawn to: the conflict of civic and personal duty in Antigone and Philoctetes; the rural setting of the pastorals. So what was the appeal of Book VI of The Aeneid, which he was drawn to most of all? Virgil sends Aeneas to the afterlife in search of Anchises after his father appears to him in a vision, urging Aeneas to set out on the quest. (Circe tells Odysseus to visit the underworld in The Odyssey, but the explicit directive to seek out the father is Virgil’s.) This idea of filial piety (manifested by the pious Aeneas as a kind of eponymous associated virtue) is one that Heaney centred on throughout his writing life, from Digging and Follower, in his first book, through the last section of the title poem in Seeing Things, with its haunting opening line: “Once upon a time my undrowned father / Walked into our yard.”

There the father had gone to spray potatoes, refusing to take the child narrator with him because it was dangerous. The father returns to the house, “His step unguided, his ghosthood immanent”, and the poem ends with the happily-ever-after formula that balances its opening:

That afternoon
I saw him face to face, he came to me
With his damp footprints out of the river,
And there was nothing between us there
That might not still be happily ever after.

Heaney wrote that poem soon after his father’s death, and its conclusion seems to imply an afterlife encounter – which is what is sought in Book VI of The Aeneid. Of course the translation of Book VI is not only that; other pieties and duties are in play, too, such as the tribute to his Latin teacher Fr Michael McGlinchey that Heaney includes in his “Translator’s Note” preface; before embarking on Book IX of The Aeneid for A level in 1957, the teacher said, “Och, boys, I wish it were Book VI.”

At the head of the note on the text that Catherine Heaney and Hollis append to the translation Heaney describes what he thinks makes Aeneid VI “the best of books”: “its mythopoeic visions, the twilit fetch of its language, the pathos of the many encounters it allows the living Aeneas with his familiar dead”. But he says it is also “the worst of books”, because of its “imperial certitude, its celebration of Rome’s manifest destiny and the catalogue of Roman heroes”.

It is a dilemma that has troubled many modern readers of Book VI: the clash between high destiny and personal fulfilment noted by Dryden. When Aeneas finally encounters Anchises, and experiences the elegiac incapacity to embrace his noncorporeal shade, the atmosphere of the poem changes in the way Heaney says: the wonderful pathos and twilit language (which Heaney represents so wonderfully) is replaced for 100 lines by a parade of imperial certitude that Virgil puts into the mouth of Anchises to praise the age of Augustus.

Heaney has risen with predictable brilliance to the stylistic and temperamental demands of the “best of books”: in the Prophetess’s grim vision, “I see wars, / Atrocious wars, and the Tiber surging with blood”; “the streaming leaves nipped off / By first frost in the autumn woods”; what has been called the greatest snub in literature, when Dido, whom Aeneas had seen like the “new moon rising up among the clouds / On the first day of the month” (already quoted in Route 110), turns her back on her betrayer, “averting her face, / Her eyes fixed steadily on the ground, turned / And showed no sign of having heard, no more / Than if her features had been carved in flint / Or Parian marble.”

Heaney rises unfailingly to the demands of these high moments in his wonderful and unflagging translation. What is perhaps less predictable, given his expressed reservations, is that he is also totally successful in bringing to vigorous life the less appealing part of the poem, Anchises’s imperial prophecies that make it “the worst of books”, such as the lines about “the internecine savagery and slaughter / Of a civil war” between Caesar and Pompey. But, of course, whatever his political judgments, we should not be surprised to be reminded that Heaney is not only an incomparable poet of personal and lyrical description but also a great civic poet.

And, of course, he was a great translator from many sources. Fittingly, his posthumous book from The Aeneid may come to be recognised as his finest translation of all, as well as the one most personal to him. It has been produced very cherishingly by the poet’s daughter and publisher, with a beautiful gold-leaf-seeming Golden Bough on its grey cover. It is Heaney’s passport to the literary future. Not that he needed one.

Bernard O’Donoghue’s next book of poems, The Seasons of Cullen Church, will be published by Faber in July