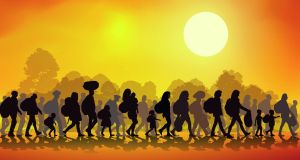 It began with the Syrian heat and the silver gleam of the soldier’s rifle. His eyes were a pale sage, and his pallor a white frost. The soldier’s gaze never left the driver of the bus, as he rooted in a bag. A, still, chilling silence ensued, as the soldier eyed the pack of cigarettes produced. With no more than a grunt, the soldier waved the bus through the checkpoint. Mathu sank back in his seat and his heavy lids fluttered closed once more.

The fields beyond Aleppo were arid and grey, vacant of life or movement. Mathu watched the dead land pass as the bus drove on, through the dry, cracked sludge of the road. His eyes were partially hidden behind his cascading hazel wisps, and a beard grew thickly on his chin. With his hair matted and his beard unkempt, he looked much older than his thirty-six years. He drank his water sparingly and handed the bottle to his son, Thoman. The boy’s eyes were liquid cobalt, but were darker than usual, and his mousey brown curls were hidden beneath a woollen cap. The eight year old had hardly spoken since they left Damascus, three weeks past. He used to love to laugh when he was back at home, but on a smuggler bus heading for the Turkish border with only strangers for company, there was little cause for laughter. Mathu held Thoman close as the bus shook from a bump on the road. A pale, haggard man behind them spluttered and sagged in his seat.

There was seldom a word heard on the bus, with most too hungry or too ill to speak, solely driven on reaching Turkey safely. But for Mathu, his journey would not end in Turkey, he would reach Izmir with Thoman and then onto a boat bound for Athens. Once there, they would take a train from Athens to Bavaria where Mathu’s uncle awaited him. For Mathu, it was a slim hope that they would even reach Turkey. He held Thoman firmly as the bus rattled on through the thick mud, clinging to his fading hope, vowing that he would not fail his son.

Ahead, the border was in sight. The thick barbed wire of the fence was shimmering boldly in the harsh sunlight, and beyond the green-brown countryside of Turkey. Mathu was on the verge of waking up his son to show him the border ahead, when the bus jolted to a halt. Mathu struck the metal bar of the seat in front and his vision blurred like a grey blizzard. He swayed in his seat as he regained focus, with the raw taste of blood in his mouth. This sudden halt spurred on a chorus of angry roars from the refugees within the bus. The driver hastily disembarked and examined the rear of the bus. Mathu gazed out his window to see the wheels of the bus grounded in the dirt and caked in sludge. With the wheels half buried in dirt and the engine almost dry on fuel, Mathu knew the bus would not reach the border.

With the protests growing to ill threats, Mathu picked up Thoman and their packs in his arms and made for the exit, knowing travelling to the border on foot was their only option. Once in the fresh air, Mathu gave Thoman their last apple, and with hands held tight, they set off on the road. An hour passed and they neared the towering fences and the cruel barbed wire of the border, and Mathu led Thoman off the road and into the weeds and mud. For what seemed like an age, Mathu searched tirelessly for a tear in the great fence, never straying far from his son. Just when it seemed they would have no such fortune, Mathu spotted a slight cut in the wire. With no knife, he relied on his hands to pry the split open. Mathu had eventually made a tear, scarcely large enough for Thoman and himself to crawl through. After squeezing through the tear, they both sat heaving for a moment, in the grass, thankful to be out of Syria. Night was descending on them like a shadowy cloak, and beyond, Mathu could see the stretch of green hills and plains. The countryside of Turkey seemed peaceful and still, but Mathu was not at ease. He knew they had miles to walk, with no chance of a lift to Izmir.

They would reach the coast, Mathu told himself and drove his boots into the sodden grass. The rain had begun, clear and heavy and soon their coats were soaked through. Thunder broke the quiet on the road, and as Mathu looked towards Thoman, he wondered if his son would ever laugh again. The rain became a burden, but hunger was a constant enemy. Thoman had their fruit the morning past, but Mathu couldn’t remember the last time he had a decent meal. He was weary beyond words, but he knew he could not rest, even for just a moment, for if he did, he doubted he would ever wake again.

Thoman’s strength was dwindling too, with every step a struggle. Mathu could do little other than hold him close and tell him they were almost at the coast. But he knew they were far from Izmir, it would take at least two days to reach it on foot. Mathu was stumbling and close to falling when headlights shone through the darkness behind them. Mathu instinctively shielded Thoman as the car slowed next them. He clenched his fists and Thoman held his waist behind him. A burly Turkish man with a grey beard and sparse brown wisps beckoned to Mathu. He murmured dryly in broken Arabic and offered them a lift as far as the crossroads outside Izmir. Mathu was wary at first, but once seeing two Syrians in the back seat who said they were both heading for the coast, and knowing they would never reach Izmir on foot, he knew this was his only choice. He thanked the driver as many times as he could before he lost himself to sleep with Thoman in his arms.

It was cramped in the car, but neither Mathu nor Thoman cared; they were finally heading swiftly towards the coast. With Thoman’s head on his shoulder, Mathu fell asleep dreaming of home, before the violence and his city’s unrest. A vigorous poke in his ribs wrenched Mathu from his dreams; Thoman was pointing out the window with eyes wide with wonder. Hours had passed, dawn had broken, and beyond the stretch of green hills the sea sparkled resplendently. In the dawn glow the sea was cerulean and vast.

In less than an hour the car skidded to a halt at the dirt crossroads. Mathu could see dozens of refugees heading wearily down the road towards Izmir. The Syrian crowds stretched on for miles like some shimmering snake, and Mathu was anxious to join them. After many garbled mutterings in thanks to the driver, Mathu and Thoman headed to reach the tumult of the crowds ahead. Their pace was swift and when Thoman’s small legs could carry him no further, Mathu, with his new surge of energy, hoisted Thoman onto his back and hastened though the bustle. Soon the tents of the Turkish coastguard were sighted ahead and lying east of the beach, the white washed town of Izmir shone.

It was midday by the time Mathu and Thoman had reached sand. Gulls were circling overhead, and the stench of the sea and fog was thick in the air. Mathu welcomed the rushing waves and splashed his face. All along the beach, the coastguard were preparing fastened rubber boats and were handing car tyres to the children. Just as Thoman and Mathu were heading for a boat along the coast, a new boat was pulled into the water next them. A tall, wiry Turkish man handed Mathu a tyre for his son. He knelt and placed the tyre over his head and around his waist. Wordlessly, Mathu stroked Thoman’s cheek and brushed away a hanging curl of his hair. And for the first time since they left Damascus, Thoman smiled. Three or four children with Thoman were placed on the boat first, and the adults climbed on after.

Mathu hauled himself up and grasped Thoman’s hand. It was crowded on the boat and the rubber base rocked in the shallow water. More people were clambering onto other boats down the stretch of sand, and it seemed as if thousands were reaching the coast every minute. The engine roared, and the sea spat water into the air. And in an instant they were off without delay, the boat striking north, towards Greece. With unease stirring in his mind, Thoman in his arms, and the azure sea glowing bright beneath, Mathu knew this was only the beginning.