A Radical History of the World review: Seeking a steampunk revolution 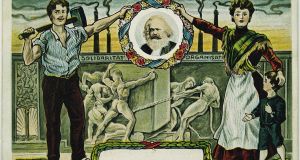 Book Title:
A Radical History of the World

The German philosopher Georg Wilhelm Hegel is – like his disciple Karl Marx – enjoying a revival. Last month, he even made it onto the sports pages, when embattled Manchester United manager José Mourinho quoted Hegel’s famous precept that “the truth is the whole”.

What did Mourinho mean when he said this? Was he admitting, in his typically coded way, that the whole of his team is, as many now see it, worth rather less than the sum of its parts? Or was he defending his slump by pointing to his many past triumphs at other clubs, and saying “there’s more to me than this isolated moment, judge me when I’m done”?

Probably the latter (and it might not take long). But when a Marxist historian such as Prof Neil Faulkner says that “the truth is the whole”, as he does in the introduction to his new Radical History of the World, what does that mean? How can we hope to comprehend history as a whole, when history keeps on happening? When can the whole be truly perceived?

The answer, in Faulkner’s book, is after the revolution. A real revolution, that is, one that, after centuries of half-measures and false starts, will finally sweep away the teetering inverted pyramid of finance capitalism, and replace it with a truly democratic, peaceful, and rational global order, based on equality and communal planning, not reckless competition and runaway greed.

This revolution will end wars, racism, misogyny, and all forms of oppression. By curing the world’s present addiction to debt-fuelled consumption and resource-depletion, it will save our planet from being poisoned by irrational growth. A workers’ revolution will be, in Faulkner’s phrase, the “solution to the riddle of history”.

Marxism views history, with cold-eyed clarity, as an eons-old struggle between competing classes of haves and have-nots, producers and exploiters. It is therefore easy to see why Marx and Hegel are now of interest again, particularly to the young. Outside the world’s top 20 per cent – the super rich, in Prof Faulkner’s estimation, plus “the layer of comfortable middle-class administrators, managers, and professionals” who serve and protect them – few thinking people would now disagree that modern capitalism’s limitless greed and contempt for the future are an existential threat to the planet itself.

His brisk chronology of world history from the dawn of man to the present makes a good case for his argument “that the struggles of the common people – slaves and serfs, handloom weavers and mine workers, women fighting oppression, black people fighting racism, colonised people fighting imperialism” drives the historical process.

Faulkner is particularly good in his analysis of the contradictions and pathologies of late-stage financial capitalism, in which tax-dodging multinationals find it easier and more profitable to speculate on various nebulous assets – debt, most of all – than to commit real money to long-term production. Meanwhile, a sociopathic mania for tax-cutting austerity, combining with the ruthless suppression of wages, job security, and working conditions is, ironically, cannibalising the very societies on which even the super-rich ultimately depend.

“Walmart pays rock-bottom wages to its two million workers,” Faulkner remarks, “but wants high wages everywhere else so that consumers have more money to spend in its stores.”

And so we arrive at the Trumpian present, in which the need for ever more profits fuels ever-greater inequality, driving financial elites to make up for their dwindling legitimacy by shifting their front operations from liberal democracy to authoritarianism.

“If you are building hospitals, you need nurses,” Faulkner pithily writes. “If you are shutting them, you need police.”

Faulkner’s past is well-argued, his present even more so. It is the future that may let him down. At its heart, this book is an orthodox restatement of Marxism’s great leap of faith, which is that a proletarian revolution will one day succeed in overthrowing all the old orders and introduce, in Faulkner’s phrase, “a new Golden Age of freedom and plenty”. At that point, it seems, history will come to an end.

It is puzzling how committed Marxists – people who pride themselves on their hard-nosed materialism – can make such an abrupt jump from the pragmatic to the millennial, from the rational to the Messianic. And another strange thing about Faulkner’s future is how much it looks like the past.

This book has a habit of eliding, or excusing, blood spilled in the name of revolution

There is a steampunk quality to his longed-for revolution. Faulkner idealises his aforementioned “handloom weavers and mine workers”, and longs for the day when the proletariat will seize the means of production and run them collectively. He points out (though only at the end) that in today’s world “workers” should mean everyone who gets paid for their labour – everyone, that is, in the lower 80 per cent, a category which includes most of those who still like to regard themselves as middle class. Still, Faulkner has few words to spare for the Deliveroo riders with master’s degrees, the casualised masses, who have no jobs to defend or workshops to occupy.

His belief that “workers” should take advantage of the anonymity of the crowd to rise against their oppressors, like the people of St Petersburg in 1917 (the closest thing yet, it seems, to the real Revolution) highlights another strange gap in his world view. The corrosive effects of financial capitalism are very well covered here, but there is no consideration of the closely-related erosion of economic and human freedoms, of free will itself, caused by the centralising forces of information technology. There is, as even the assassins of Russia and Saudi Arabia have lately discovered to their cost, precious little anonymity left in the crowd.

The human costs of the wars of religion and imperialism, the dismal tolls of dead and displaced, are diligently recorded, but this book has a habit of eliding, or excusing, blood spilled in the name of revolution. Lenin is a hero, Stalin a villain, so it is only the latter, in this book at least, who kills lots of kulaks. The guillotining of thousands of people during the French Reign of Terror was “necessary to discourage counter-revolutionary activism”, Faulkner states.

Judging from this book, there will be little room in Faulkner’s future for human failings as we currently understand them, or for human feelings as they have evolved. Faulkner states that family life is one of the “building blocks of capitalism”, “an incubator of conformity and conservatism” and “a pressure cooker of patriarchy, narcissism, misogyny, homophobia, domestic abuse, and psychotic rage”. Well, the last one is certainly true.

“Even in relatively liberal households – where parental roles are less gender-specific and parental authority less repressive – an irreducible core of top-down control and socialisation endures . . . Even the most liberal parents can hardly avoid being the prototype of the teacher, the office supervisor, and the police officer”.

Fortunately, there is an easy solution to hand: all of the family’s useful functions – “satisfying the basic physical and emotional needs of workers; providing the money, time, and effort involved in rearing children; caring for the elderly and the disabled; and supporting students, the unemployed, and other family dependents” – could be “collectivised”, Faulkner says.

Hand children over to be raised by the state? I can’t see anyone voting for that. Particularly in Ireland, not after that last time. There would have to be some sort of revolution first.